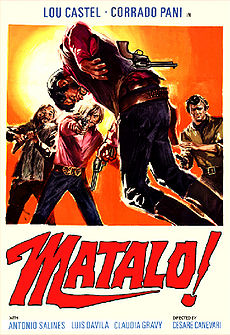 Outlaw Bart is about to be hung for an unknown crime. At the last moment, a gang of Mexican bandidos raid the town and free Bart. They take him to a crossroads and then part ways. But Bart, not being the kindest of souls, pulls out his winchester and begins to kill the entire gang. From there, Bart and his gang rob a stagecoach and retreat to their ghost town hideout. From then on, the film's pace slows down and a very mysterious character study unfolds. 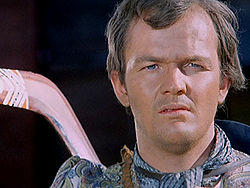 Of course we all know Matalo!'s reputation. And I think it's safe to say it deserves every bit of it. It surely is the weirdest Spaghetti Western you'll ever see. And that is saying a lot considering that hooded hordes of klansmen, 12 shot six shooters, child murder, mutilation, and ear severing are things considered commonplace in the genre. Not to say that Matalo is graphic, it's just very very surreal. More like a Spaghetti Western art house film. Beyond surrealist flourishes, there are other odd film-making choices made. The film has virtually no plot. Instead, Canevari fills in for plot with extremely long and stylish scenes of little goings on in the ghost town. For example, about a good 10 minutes of film time are taken up by our three villains, walking around a deserted hotel at night. Not doing anything worthwhile or out of the ordinary. Just basically putsing around. But the avant garde editing and sound effects make the scene somehow entrancing and interesting to watch. There are a lot of these seemingly "pointless" scenes in the film that go on for some time. It may throw unexpecting viewers off guard but it's very interesting and entertaining to watch. And Canevari has a way of savoring just about every frame of film. So there is not a wasted shot in the film. It's filled to bursting with subliminal eye ball editing, grotesque hand held sequences, unsettling sound effects, and crazy camera work. 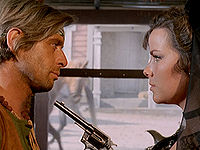 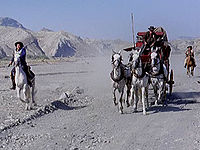 The pace of the film is another oft talked about subject. It too has a habit of throwing viewers off guard. After the well filmed and exciting openng scene, the film carries on in this fastpaced manner for the next 30 minutes until finally introducing our hero and ultimatly throwing away the plot and most of the dialogue. From then on, it's a pretty slow paced film that becomes increasingly unhinged. The editing becomes more symbolic and crazy. Near the end, there is a torture sequence filmed entirely in slow motion. The absurdity of the film makes it hard to look away.

The soundtrack by Mario Migliardi is also among the stranger soundtracks of the genre. Much of it uses 12 string guitars with electro acoustic sound effects and guitars. It fits the film very well and adds to the unsettling and surreal feel of the film. He also does a great job with tiny sounds. Making a lot of strange sounds which sound like a drop of water dripping in a tunnel. While Canevari films a graveyard, Migliardi uses recordings of creepy muttering or chanting sounds. It's a very effective soundtrack and one of the main reasons for this film's fame (or infamy).

The acting ranges from over the top to underplaying. Lou Castel is pretty good even if he doesn't really look like a Spaghetti anti-hero. Corrado Pani's performance is way over the top but still good. It's as though Canevari told him to act like a bloodthirsty child. It is a lot of fun to watch him when he is on camera but another aspect of the film's structure is that he disappears for half of it. Claudia Gravy may not be the best of actresses but is certainly one of the prettiest. Antonio Salines is very over the top at times. A very cruel character. Luis Davila does a good job but there is nothing special about his character.

The director, Cesare Canevari, does a very good job. He uses almost every camera technique of the day and creates a West far removed from any other. This was his only good genre film and one of the best of the genre.

All in all, a very good film. I wasn't sure about it the first time I watched it but after a second viewing, I find it to be one of the best. A very good film if you want to explore the border area of the Spaghetti Western. Highly recommended. It may not have a real plot but it nonetheless gets a 5/5 from me. MATALO!

Retrieved from "https://www.spaghetti-western.net/index.php?title=Matalo_review&oldid=131826"
Category:
Cookies help us deliver our services. By using our services, you agree to our use of cookies.