May God forgive you... I won't Review 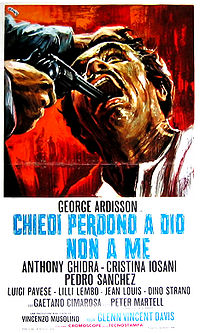 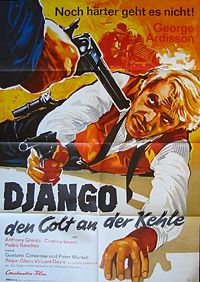 Review of Chiedi perdono a Dio... non a me by Scherpshuetter

The first of two films – both westerns – directed by Vincenzo Musolino, a jack of all trades of the Italian genre cinema. He had worked previously as an actor, writer, assistant-director, production manager and producer. This one is a loose sequel to Cjamango, written by Musolino, but directed by Eduardo Mulargia and starring Ivan Rassimov. Mulargia would also direct this movie, but he withdrew after a disagreement with writer-producer Musolino, who then took over direction and also chose Ardisson to replace Rassimov.

When he’s away from home, all family members of Cjamango MacDonald are killed. He soon discovers that the killings were ordered by his neighbour, the rancher Stuart – who’s also the father of his former fiancée Virginia. But Stuart is killed by the very men he paid to do the dirty work, the gang of the Smart brothers. After Cjamango has killed Jack, the youngest of the two brothers (who’s a drunk and not so smart), he is captured and tortured by the older and more ruthless Dick Smart and the rest of the gang. He manages to escape and with the entire gang on his trail, he suddenly remembers that one of his father’s friends owns a machine gun from the Civil War …

There are several versions of this film; in the original, uncut version the events are presented in the form of a flashback. The opening scene is set on a graveyard: Cjamango, now old and grey, tells the story to a young Mexican called Manuel, who has sworn revenge on his parents’ graves. Cjamango tells Manuel that he once was young and revengeful and therefore wanted to take the place of God (1). In the shorter international version, the introduction on the graveyard and the voice-over – which turn the film into a morality tale with a message - are absent, leaving us with a straightforward revenge tale. The story isn’t very complicated, but with people popping up (or even being killed) without proper introduction, several scenes may be a bit puzzling and would certainly have benefited from a narrator. There’s another aspect of the movie, that is lost in the shorter version: Cjamango tells his story to the Mexican to unburden his soul: too many people were killed in the massacre that apparently resulted from a rather simple dispute between two families, the MacDonalds and the Stuarts (are these names chosen by pure coincidence?). The only two members surviving this bloody war, were Cjamango and Virginia, who were reunited after the slaughter (a pretty bizarre outcome if you think about it).

Although the outdoor scenes were shot in Almeria (usually a sign of a decent budget), the film has a feeling of cheapness hanging over it. Even Ardisson’s blond dye job looks cheap. Some scenes are well done (Sanchez bringing Martell’s body to town to collect the bounty), others seem rushed and the ending with the machine gun – with all the riders killed and none of the horses shot – is way over the top. The film is often cited among the most brutally violent of the genre. True, victims fall like flies, especially in this finale, but the violence is not more graphic or sadistic than in a lot of other diehard spaghettis. With his bulldog face Ardisson doesn’t look like your average spaghetti western hero, but he seems to do his job rather well. Both Ghidra and Martell turn in fine performances as the evil Smart brothers, but if you don’t pay close attention, you might miss both of them: Martell’s part is very short and Ghidra is almost unrecognizable (he’s the one with the whiskers and the moustache). Sanchez/Spalla steals the film as Ardisson’s side-kick: an unconventional bounty hunter who follows the avenger’s footsteps and collects all bounties behind his back! He has a hilarious scene in which he pretends to grieve with a widow over her husband’s death, but only has eyes for her ample bosom.

Felice di Stefano’s score is like the rest of the movie: some parts are very likeable, others sound uninspired. The poster with the barrel of the gun put in the mouth of a Mexican bandit, has become more or less iconic. The film is also a bit unique in the sense that it boasted with its 18-rating in Italian advertisements; film makers were always on the alert for an 18-rating (spaghetti westerns were very popular among Italian teenagers), and often made cuts to avoid one, but on Italian posters was written: Data la carica emotiva, questo film è severamente vietato ai minori di 18 anni! (Due to the emotional content, this film is definitely restricted to person of at least 18 years of age!).

(1) You can pick up the opening scene here: http://www.youtube.com/watch?v=LFSexB_pRR8 (no longer available)