May god forgive you, I won't - review

Review of Chiedi perdono a Dio... non a me by Mike Hauss. The film is now available on DVD from Wild East. 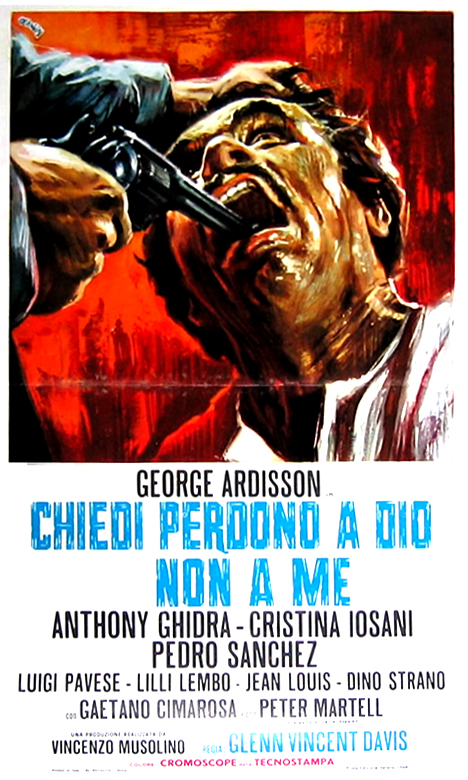 Let me start this review off first by saying the Wild East Productions print of this film is beyond amazing. The colors are so richly saturated, it makes some objects appear to jump off the screen, the picture clarity is razor sharp and no audio issues to speak of. The whole presentation of this film including a deleted prologue and epilogue and an interview with an animated George Ardisson is outstanding. Ardisson would die shortly after filming this interview in December of 2014. Ardisson, in the interview seems to be a man who is trying to come to terms with his impending death, he espouses his religious beliefs, while admitting his mistakes both in his personal life and in his professional life, including the two bombshells that he drops that he turned down the parts of both Ramon Rojo in A FISTFUL OF DOLLARS (1964, Italy, Spain, W.Germany) and Trinity in THEY CALL ME TRINTY (1970, Italy).

The film opens with the camera tracking away from the thriving McDonald ranch, where Cjamango McDonald is heading into town to pick a few things up, he bids farewell to his sister Jane (Susanna Martinnkova), brother, and father (Armando Guarnieri). While in town Cjamango is approached by his ex-fiance Victoria Stuart (Cristina Iosani), it seems that Victoria's father holds the mortgage on the McDonald ranch and there's some bad blood between families, Cjamango thinks it's better if they are not seen together anymore. As Cjamango makes his way home, the McDonald ranch is besieged by a gang of outlaws who kill his family. A solitary man is sitting on a hill with a spyglass looking down on the slaughter of the family. Cjamango is grief stricken upon his return to the ranch and vows revenge. He visits the Stuart ranch that same evening to pay off the mortgage on the McDonald ranch and get the deed, old man Stuart (Luigi Pavese) who's in a wheelchair blames Cjamango' s father for his handicap, to which Cjamango replies "that was self defense, he just outdrew you." Cjamango tells the old man and his son Scott (Jean Louis) that his family was killed that very day, to which old man Stuart replies "you McDonald's have always made a lot of enemies for yourselves, seems like some of them have taken revenge." When Cjamango tells Stuart that he'll get even with all of them, the old man seems visibly shaken. The next day Cjamango heads out in a revenge driven frenzy and is followed by the man who spied on his families massacre, once their paths cross the man says his name is Garcia Barrica Ramirez, whom everyone calls Barrica, and he can help Cjamango in his quest for revenge, as he witnessed the killings and can identify the men. One by one Cjamango kills off the men who participated in his families killings, including a particularly brutal execution-style killing of an outlaw named Chico (Tano Cimarosa), who when he's on his knees begging for forgiveness has Cjamango's gun thrust in his mouth, Cjamango replies to the pleading Chico, "God may forgive you... but not me," shooting Chico twice in the mouth off screen. Chico implicates the Smart Brothers and the Stuart's in the killing of Cjamango' s family before he's killed. 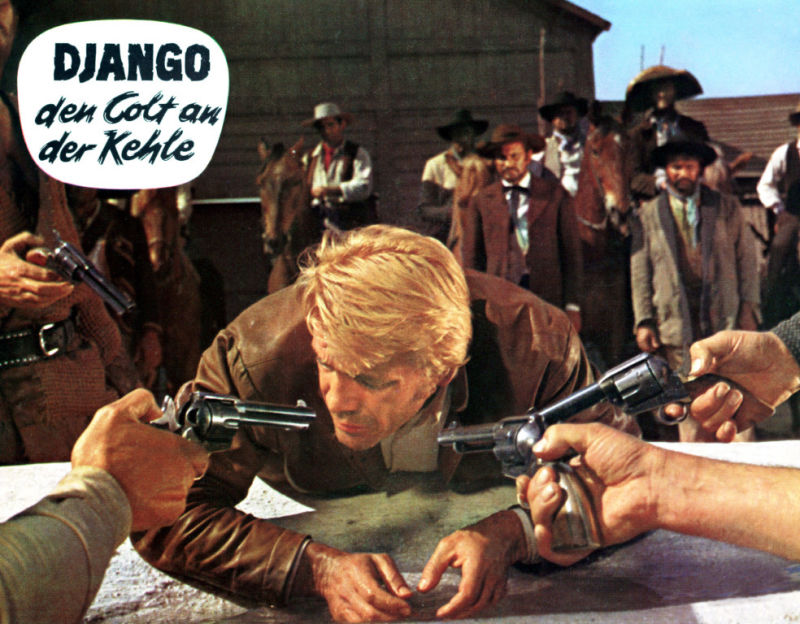 The Barrica character is revealed to be a collector of bounties and when Cjamango kills the outlaws, he takes the bodies and collects the rewards. The Smart Brothers are two ruthless leaders of a large gang of outlaws who rob and kill for money. Jack Smart ([[:Category:Peter Martell|Peter Martell) is at the saloon getting drunk, upset that his brother Dick (Anthony Ghidra) is upstairs with his saloon girl, after a bit of gunplay between the brothers, Dick comes down and tells Jack that "you got a $5,000 price on your head and some day someone will collect it if you keep guzzlin." The gang ride off on a job to rob a payroll shipment, but Jack is left behind because of his drunkenness. Three bounty hunters enter the bar after the gang has departed and the weaving, stumbling Jack outdraws the three and proceeds up the steps to visit the saloon girl. Cjamango enters the saloon and as Jack reaches the top step calls out Jack's name and when Jack turns around he says, "Your looking at Cjamango McDonald." With that Jack draws but is shot down by Cjamango. Dick Smart is upset when he learns of his brothers death and goes to the Stuart ranch looking for more money, to which Scott jumps up and says "you want any more money, get rid of Cjamango." Dick slaps Scott, knocking him down and the old man pulls a pistol and says "no more of that, now get out of here." Jack begins to leave but spins around and shoots the old man dead, Victoria hearing the gunshots runs downstairs to see her father dead. Two of Jack's henchmen take Scott outside in front of the gang and they open fire on him, Jack takes the families strong box with him. Cjamango rides to the Stuart ranch still stewing with hate and revenge bound, but is met there by the news from Victoria that her family has been wiped out. Cjamango is captured there by the outlaw gang and administered a lengthy beating and as Jack's about to shoot the prone Cjamango in the head Barrica arrives and tells Jack that Cjamango has $10,000 dollars hidden from the reward money he collected. They throw the legs and hands bound Cjamango into a room and as his guard sleeps outside the room, Cjamango lights a match from his pocket and catches some hay afire and uses the blaze to burn the ropes off his hands. Cjamango escapes and is followed by the gang, he gives them the slip and he goes to visit an old friend named Sam, who owns a machine gun from the war, Cjamango tells Sam that he has to find a way to save himself from the gang to which Sam replies "with a gun like that, you could massacre the whole union." Cjamango sets up a plan to lure and trap the gang with the help of Barrica and the machine gun.

While there's really nothing new in this film, it's so technically polished and the acting is inspired led by the great Anthony Ghidra (Dragomir 'Gidra' Bojanic) as Dick Smart and the fight scenes are well choreographed that it really propels this film from being just another imitation or copy into a vigorous, effective film with energy. The direction is assured and the shots are wonderfully framed and the cinematography is breathtaking. Just all and all a spectacular achievement on the technical side, the director Vincenzo Musolino (as Glenn Vincent Davis), who also wrote this film, really shows an amazing ability in movement, camera angles and frame composition. Musolino only directed one other film that being the effective Zorro influenced film Quintana: DEAD OR ALIVE (1969, Italy), Musolino began his career as an actor, appearing in twenty-four films, he also would write a total of six spaghetti Westerns before his untimely death in 1969 from a heart attack, at the age of 39. The lead in this film George Ardisson does a good job and brings some emotion and physicality to the film, Ardisson appeared in a slew of genre films including the spaghetti Westerns GRAND CANYON MASSACRE (1964, Italy), which is the second film on this twofer from Wild East, A MAN CALLED AMEN (1968, Italy), ZORRO THE FOX (1968, Italy), DJANGO DEFIES SARTANA (1970, Italy) and CHAPAQUA' S GOLD (1970, Italy, France). The fine actor Anthony Ghidra amassed 119 acting credits in his career, including appearances in a fistful of spaghetti Westerns, with his most notable being DJANGO, THE LAST KILLER (1967, Italy), and two films released by Wild East Productions TEQUILA JOE (1968, Italy) and A HOLE BETWEEN THE EYES (1968, Italy). The actor Peter Martell (Pietro Martellanza) as Jack Smart only appears in one scene, playing the drunken character Jack, Martell a good character actor is probably best known for his roles in the spaghetti Westerns, THE UNHOLY FOUR (1970, Italy) and FORGOTTEN PISTOLERO (1969, Italy, Spain). The prolific spaghetti western actor Riccardo Pizzuti appears briefly as a bounty hunter gunned down by Jack Smart, Pizzuti would go on to appear in both MY NAME IS TRINITY (1970, Italy) where he plays the character Jeff and TRINITY IS STILL MY NAME (1971, Italy). The score by Felice di Stefano is mediocre at best, it does have its moments when the action is heaviest, but is really just uninspiring. 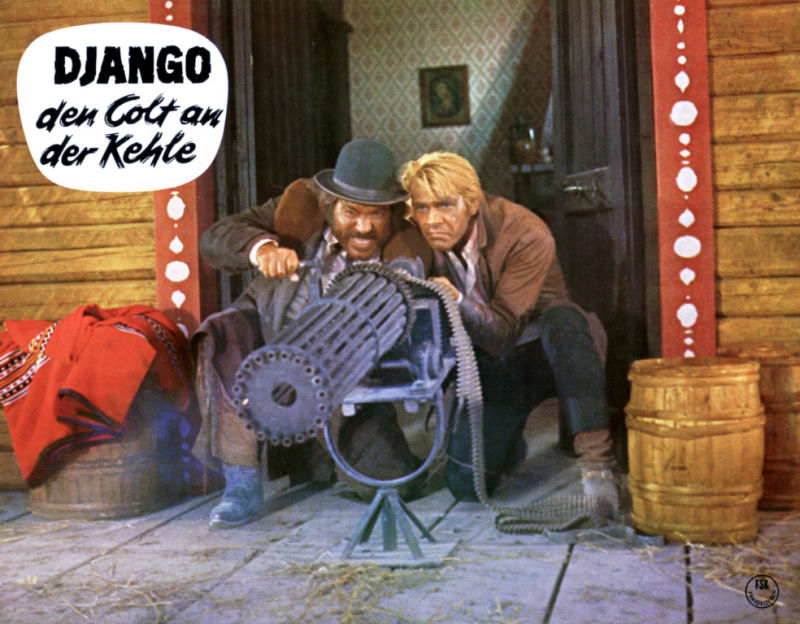 The Wild East release of this film is beautifully restored and is one of their finest achievements to this point. This film along with the early spaghetti western MASSACRE AT GRAND CANYON are included on this twofer that includes the aforementioned deleted scenes, theatrical trailers, the interview with George Ardisson and picture galleries.

The film borrows from many westerns that predated it, starting with the name of the character Cjamango, followed by the revenge for a slaughtered family angle, along with the killing for land holdings, the dispatching of a large group of men by a machine gun, which was used most famously in Django (1966,Italy), the collecting of bounties by a character after the hero had killed them and the savage beating of the hero and his eventual escape. In the liner notes the spaghetti western expert Tom Betts says "When CJAMANGO starring Steven Todd (Ivan Rassimov) and directed by Edward G. Muller (Eduardo Mulargia), was released in 1968, it was very successful. It was followed up in 1969 with MAY GOD FORGIVE YOU, I WON'T, directed by Glenn Vincent Davis (Vincenzo Musolino) and starring Giorgio (George) Ardisson as the Cjamango character." The film is a gritty, nasty, hate filled excursion into a man's quest to get revenge upon the people who massacred his family. That goal of the Cjamango character for revenge never wavers or goes off track , even the slightly comedic moments by the great Pedro Sanchez (Ignazio Spalla) can't derail the action. MAY GOD FORGIVE, I WON'T is a simple story that's been done countless times before, but with strong acting and inspired direction the film somehow rises above its repetitive origins to present a solid story that is fresh and rewarding in its single mindedness.

Thanks as always to the spaghetti western expert Tom Betts for his help on this review.

Article written by Michael Hauss, author of several reviews for Monster magazine, We Belong Dead, Multitude of Movies, Divine Exploitation and blogs that includes Multitude of Movies, Theater of Guts and the SWDb. He has a love of film with particular interest in the Spaghetti Western and Horror genres. Michael lives in the United States where he resides with his daughter and their two cats Rotten Ralph and Fatty boo-boo.
Retrieved from "https://www.spaghetti-western.net/index.php?title=May_god_forgive_you,_I_won%27t_-_review&oldid=101824"