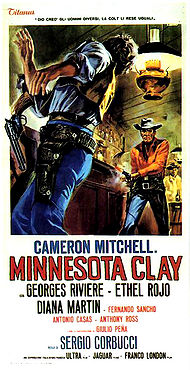 Made at the same time as Fistful of Dollars and premiered shortly thereafter (without having much success), this entertaining early SW already shows most of the typical trademarks of the genre in a primarily satisfying way. Only the aging hero is more modeled after American standards, but here he has also to deal with his diminishing eyesight. Not the last SW hero with a physical handicap. It was Corbucci's real SW debut (after working more or less on the average Massacre at Grand Canyon) and was the first Italian Western on which the director didn't hide behind an American sounding pseudonym.

Retrieved from "https://www.spaghetti-western.net/index.php?title=Minnesota_Clay&oldid=138397"
Categories:
Cookies help us deliver our services. By using our services, you agree to our use of cookies.