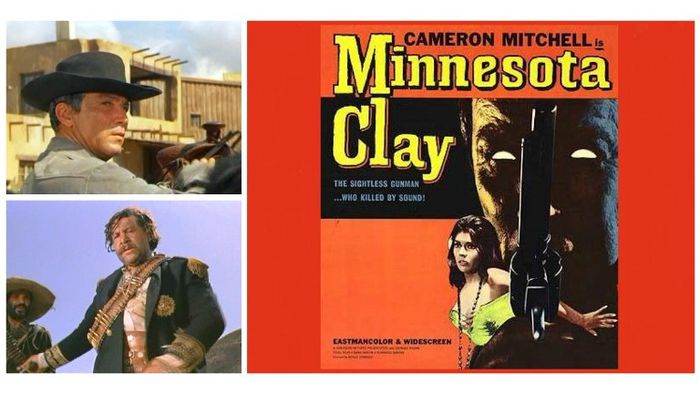 In Sergio Corbucci's second western Cameron Mitchell is Minnestota Clay, a gunfighter who was convicted for a crime he did not commit. After his escape from a labor camp, Clay goes looking for the man who framed him. The main suspect, a man called Fox, was hired by the people of a small town to protect them against a ruthless Mexican bandit, but Fox has started a protection racket, asking increasingly more money for his services and the town threatens to become a battlefield. Ortiz, the Mexican bandit, hires Clay to kill Fox, but Clay is misled and lured into a trap by Ortiz' treacherous girlfriend Estella. And then the Mexican attack ...

With its two warring factions, one American, one Mexican, plus a protagonist who must fight against heavy odds, Minnesota Clay is a forerunner of Sergio Corbucci's landmark movie Django (1966). Confronted with the misfortune of going blind, the disabled Clay is also a cousin of the mute gunslinger from The Great Silence (1968). But Corbucci had not found his own anti-hero yet. Clay is presented as a man, 'who stands only with himself', but he's not really a cynical loner: he's a loving family father and a loyal friend. When confronted with a photo of his late wife, we see tears in his eyes and he tries to conceal the fact that he is the father of the young girl (who now lives in the custody of his best friend), because he is afraid that she might be ashamed of him. 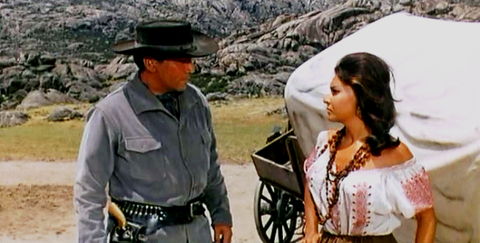 The film is not without flaws: the romance of Clay's daughter and he talkative and clumsy admirer is particularly corny, more forties Hollywood than sixties Cinecittà and some of the dialogue sounds hollow or simply stupid. In one scene, when he and his friend are surrounded by the Mexicans, Clay asks if there's another way out of his friend's house. The answer is: "Yes, the back door." All this in a house that is not bigger than a log cabin! But despite its obvious shortcomings, this is a nice little film, and a definite improvement over Corbucci's first western, Massacre at Grand Canyon (1964). It's also of importance as the first spaghetti western signed by an Italian director with his own name (Corbucci previously had signed with the Americanized 'Stanley Corbett', Leone had used the pseudonymous 'Bob Robertson'). The film is beautifully shot, hiding the film's reduced budget very well, and Mitchell adds a distinctive melancholic touch to his character of the aging gunslinger-with-a-past.

Unlike Eastwood, Mitchell only became a star after he had left Italy (and accepted a part in a TV-series, High Chaparral) and his financial situation at the time was deplorable. According to Corbucci he was afraid of Rojo, and avoided her as much as possible, because she had told him she was dreaming of a life as a Hollywood star and he felt ashamed that he 'could not afford her' (1). Fernando Sancho's appearance as Ortiz is a bit short, but he would make up for that in numerous spaghetti westerns to come. The film was shot in the month of September 1964 in the Spanish Balcazar studios and the town of Colmenar Viejo, near Madrid (where Leone had shot A Fistful of Dollars) and released shortly before Christmas the same year. Two different versions were made, a shorter one with an unhappy, and one with an added-on happy ending. In the first one Clay apparently dies in the hands of his daughter, in the second one an epilogue is added in which Clay wears glasses; in the final reels he throws them in the air and shoots both lenses. Most people seem to prefer the sad ending, but I would say they both work equally well.

Retrieved from "https://www.spaghetti-western.net/index.php?title=Minnesota_Clay_Review&oldid=109116"
Category:
Cookies help us deliver our services. By using our services, you agree to our use of cookies.