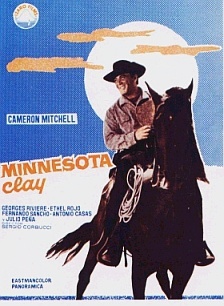 In 1929, a novel named Red Harvest by a début author, Dashiell Hammett, hit the shelves. The writer was known in magazine circles for his tough, laconic crime fiction published in the likes of Black Mask and True Detective Stories. The book was about the Continental Op being called to the city of "Personville" (known to the locals as "Poisonville", which was also the original title of the novel) and becoming involved with two warring gangs who want to rule the city. It was a landmark in crime fiction and the start of Hammett's massively influential run of books that included The Maltese Falcon (1930) and The Thin Man (1934). Red Harvest in fact, would one day eventually end up on Time Magazine's 100 Best English-language Novels Published Between 1923 and 2005.

However, it was one plot point in Red Harvest (and one that would reoccur in Hammett's 1931 novel, The Glass Key) that would help create the world of Spaghetti Westerns. The idea of two gangs fighting over the control of a city or town fuelled the imagination of legendry Japanese director Akira Kurosawa. He adapted the story for his 1961 masterpiece Yojimbo, starring Toshirō Mifune as a lone ronin (a samurai without a master) who enters a town ruled by competing crime lords.

And who should see this in the cinema in Rome, at Christmas in 1963, but young Italian directors Sergio Leone and Sergio Corbucci (1)? Both were amazed by it; both were eager to direct a Western influenced by Yojimbo; both would utilise the plot point of warring gangs; both films would help launch the Spaghetti Western genre.

Leone's film would be, of course, the seminal A Fistful of Dollars (1964), but while that movie is a virtual remake of Kurosawa's, Corbucci's Minnesota Clay, released in 1964 as well, uses only the background of two belligerent gangs for his template. With his scriptwriter Adriano Bolzoni, Corbucci weaves a less plagiaristic tale...

Minnesota Clay is an aging gunfighter with ailing eyesight, imprisoned in a harsh, Yankee prison camp for a murder he didn’t commit. He escapes from jail by taking hostage the jail’s doctor and crosses over the border into Mexico, where he returns to the town of Mesa Encanada. He was once sheriff there, but now Fox rules it, who withheld evidence at Clay’s trial so he would be jailed. Fox runs protection and extortion rackets in the town; however, Ortiz and his bandits still plague the area and are at war with Fox. Clay is determined to prove his innocence and bring peace to Mesa Encanada.

After big, bold credits in red, reminiscent of the large-scale American Westerns of the 1950s, the film opens with a slow pan across a harsh, Sun-scolded quarry with prisoners toiling away below, watched menacingly by guards in the bright, Pop-art blue uniforms of the Yankees. The film announces itself almost as a decree on what the world of the Spaghetti Western would and should be: tough, cruel, with death wrathfully spying down upon the players.

Yet parts of the old American Western remain, unlike A Fistful of Dollars: Clay invokes the Cavalry as a means to bring peace to Mesa Encanada and law and order is still held high, for the time being, surviving deconstruction. In the following years, however, it would not be so lucky.

That is not the only thing different from Leone's movie as well. Whereas Leone favoured rapid cutting and jabbing close-ups, Corbucci and his cameraman Jose Fernandez Aguayo prefer longer takes, crane shots and elaborate pans, truly filling the widescreen frame. The art direction too, by Carlo Simi, who also worked on Fistful, which used the same sets as Minnesota, makes the town less rundown and more lively and bustling. The two films are inextricably linked but paradoxically, from their conception onwards, they grew into very different movies.

Corbucci's direction is a little unsure sometimes, especially when handling dialogue scenes. However, when it comes to the action, he is magnificent. An early hold-up of a buggy is expertly staged, but it is the climactic gunfight that really shows his skill: Clay, who is now nearly completely blind, tracks and kills Fox's henchmen in night time Mesa Encanada. This is the film's showpiece and brilliantly done, with Cameron Mitchell falling and stumbling, shooting at the sounds his enemies make. It's beautifully shot and edited and up to the standard of anything Corbucci did in The Great Silence (1968).

However, the film is flawed by poor, risible performances from Antonio Casas and Diana Martin, stars of a romantic subplot in the film that is also incredibly badly written. Corbucci shared with Leone at least their inability to do convincing love scenes (2).

This poor, clichéd dialogue extends to the rest of the film and seriously harms it; thankfully Corbucci has some great actors on hand to rescue the film.

Cameron Mitchell as Clay lends the film a certain gravitas and weight where it desperately needs it and turns in a good piece of acting; if he had had a better screenplay to work from, Clay might have become one of the more famous characters in the world of the Spaghetti Western.

Georges Rivière, as the cunning villain Fox, gets all the few good lines and gives the supreme performance in the picture. Wryly and clever, his best scene is when he kills the treacherous Estella (Ethel Rojo) after making her swear on the Bible that she is telling the truth when she tells him that Clay is coming to town. It’s a memorable moment in the film and, anchored by Rivière, one of the best parts.

Fernando Sancho has a brief role as the gluttonous Mexican bandit chief Dominique Ortiz Mendoza and makes a large impression in one of his earliest Spaghetti Western roles.

Gino Pernice plays the permanently on edge Scratchy, and his death proves a cinematic quote to one of the Western genre’s most iconic movies. After being shot at the climax by Clay, he staggers into the bar and asks for a drink before collapsing dead. A virtually identical scene is supplied in John Ford’s Stagecoach (1939).

The technical side of the film is fine, apart from the score. The music was by the undistinguished composer Piero Piccioni and it is bland, forgettable stuff, only sparingly using guitars and even then, it is without the impact the of Ennio Morricone. It is too redolent of the themes of the worst of the 1950s Western B-movies, although thankfully, it is not as intrusive as those scores were.

It is interesting to note that the film has two endings in circulation: the first (and what I feel is the best), has Clay, having killed Fox, fall to the ground in his daughter’s arms, presumably dead. The alternate ending on the other hand, has an extra scene where Clay has recovered and, wearing glasses, rides off. When he reaches the horizon, he throws them into the air while shooting a hole in both lenses. This ending is trite and anti-climactic and exemplifies the worst aspects of the film.

Clay has a strange, compelling nature that inexplicably draws me back to it time and time again. If it never truly becomes the great Spaghetti Western it occasionally threatens to be, I think it still has enough excellence in it not just to be of interest to genre fans, but to stand next to those other flawed giants of the Western, such as Sam Peckinpah’s Major Dundee (1965) and John Ford’s Cheyenne Autumn (1964).