More Dollars for the McGregors Review

MORE DOLLARS FOR THE MCGREGORS
Note: This movie has nothing to do with Franco Giraldi´s Seven Guns For MacGregors and Seven Women For MacGregors.

George Forsyte is widely known for collecting bounties – he delivers all kind of scum to the law in most exclusive manner – un buco in fronte , that is: with a hole in the forehead. He´ll cash the money and leave a mumbling lawman with one particular question on his mind: "What on earth is the magic of George Forsyte?" Well, he uses his wife as a decoy – some unfortunate rascal ambushes her and through co-op they pacify the knave (the woman punches him with something solid on the head). But what about the hole then? After she has departed, he simply puts a bullet in a head of the tied-up scoundrel.

We learn more about the tactics of this couple in the first third of the film, which is focused on Forsyte trying to make money by hunting down another outlaw, called Joe Saxon. In the second third, the attention is shifted to the character played by Peter Lee Lawrence, a dangerous gunslinger called Robert McGregor who seems to be after Forsythe. In the third and final part, the two men team up against Ross Steward, the boss of a local mine and also a person with a nice bounty on his head. Furthermore Steward has a penchant for smoking illegal stuff and is known for his unusual cruelty. My favorite scene of the movie features Ross trying to prove to himself that his gunslinger abilities are still as good as they were in the good old days. No need to say that his shooting practice won't end up in a pleasant way. Ross Steward is one of the most messed up villains of the genre, a total wreck, who even proposes to Forsyte to offer him half of his loot if only he let him live in peace.

I skip PLL´s character (which is ordinary quick-on-the-draw western wilderness wanderer) to concentrate on Carlos Quiney´s character of Forsyte. As said, he is kind of a cheater. If we carefully watch his actions, we can't help asking ourselves why he would be so dangerous. Until the end we don´t see him in direct confrontation (yes, there are few scenes with him shooting guns out off hands, but always in an indirect clash). He is feared by his enemies, but would they be feared if they knew about the exact method of killing outlaws? This guy is rather an unscrupulous manipulator (opposite to an expert marksman in the style of the Man With No Name) who uses all kind of trickery and deceit to look like a formidable gunman in public. The scene when he is hidden in a cupboard with a shotgun is a good example. 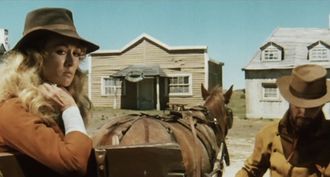 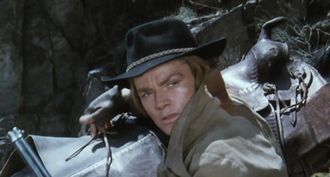 One cannot avoid comparison with Merino´s previous western – Requiem for a Gringo (aka Duel In The Eclipse). Requiem was more intense in storytelling (one of most thrilling westerns I've ever seen) with some focus on magical elements surrounding the main protagonist - on first view it seems that the Jaguar Man (or Ross Logan) is just using conjurer's tricks to fool his enemies (like stage magician Derren Brown would do), but in some scenes it seems he has supernatural powers, for example in a scene of a gunfight between him and gunslinger Ted (played by Carlo Gaddi), in which suddenly a sandstorm rises up, confusing the enemy, so Ross Logan can shoot him without much effort. Whole scene is built up in a way that indicates (at least to me) Ross Logan used this time some supernatural power and changed the weather to his advantage. Of course, these supernatural things can be also explained by pure coincidence.

In More Dollars the magical input stays with a character of Yuma (Malisa Longo), a female shaman who pops up when a hero got beaten up or the situation calls for scorpion rising (which is not much). The magic of Requiem was woven into the plot, here it seems redundant and it would have been better if they had be omitted this theme completely. However, as protagonist, Carlos Quinney works better for me than Lang Jeffries in Requiem. Unlike Lavagnino's haunting score for Requiem, Augusto Martelli's music doesn´t help to deepen the atmosphere. There aren´t many motives and even those few are not very inventive and after a while they become a little obnoxious. I liked the song played over the opening credits best, but I wouldn't call it exactly memorable either.

In More Dollars For McGregors there are no shooting contests with larger-than-life shooting abilities put on display (like one man making a spur evolve with his bullet, the second shooter stopping it). Don't expect cool tricks with guns, heroes more rely on a stealth action in dead of a night than direct flare-up, characterization seems quite realistic and believable and the script itself abounds a certain originality. Nevertheless, some aspects didn´t really impress me. I have already mentioned the music, but more inventive camerawork would have been welcome, as well as a few more thrilling scenes towards the end. Anyway, I think we shouldn't complain too much about this movie, which was made with a reduced budget and still is an interesting genre entry with a memorable villain by means of extra. And yes, it has a jaguar poncho too.

Retrieved from "https://www.spaghetti-western.net/index.php?title=More_Dollars_for_the_McGregors_Review&oldid=97714"
Categories:
Cookies help us deliver our services. By using our services, you agree to our use of cookies.