My Name Is Shanghai Joe review 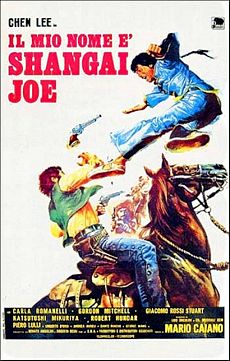 Director Mario Caiano made this late period spaghetti to take advantage of both the Kung Fu genre's rising popularity, and the already well established Western films in Italy. Having made nine westerns prior to Shanghai Joe, this would be his last before moving on to other genres.

Shanghai Joe is a Chinese immigrant, seeking a new, peaceful life in America. He travels to Texas where he finds employment as a cowboy, and soon finds it is not cattle they are moving, but Mexican slaves.

Shanghai Joe is not the traditional anti-hero of the spaghetti western, but more of a good guy type. He's not the hard-to-relate-to, classic good guy of the American western, but more of an average man, just trying to make it in a harsh world. The American west presented in Shanghai Joe is harsh indeed, for someone like Joe. Nearly every character in the film refers to Joe in some kind of racial slur, from "chinc" to "slanty eye". Towards the end of the film, Joe even points out the first time he's not referred to by one of these names, when a young Mexican waiter calls him "Signor", or "Sir". The racism is by no means confined to Asians, with references abound to "redskins", "niggers" and "wetbacks". While never really making any solid political statements, this film is constantly emphasizing the oppressive aspect of America towards anyone not white and not consistent with their culture. At one point an eccentric doctor remarks, "Americans are some of the biggest fascists God ever created."

The racism presented serves to setup the unfolding of Shanghai Joe's transformation into a fighter for justice. Through flashbacks, we see Joe has indeed learned from his martial arts training that the response to evil is justice. However, from the start of the film, Joe is not interested in being a fighter, but only making a life for himself in this new land. In the beginning, Joe takes repeated insults as meaningless, always remaining calm and cool, even friendly. Whether he's being ridiculed, challenged or having knives thrown at him, Joe always has an even restraint and an air of optimism. The optimistic friendliness of Joe contrasts the usual dark and brooding, death obsessed anti-hero, while still sharing the common placement as an outsider or stranger. Joe is free of greed, hatred and mistrust- all of which the usual anti-hero is full of. Where the traditional spaghetti anti-hero avoids all aspects of life requiring spiritual insight, and is only motivated by obtaining large sums of money via dirty methods, Joe seems perfectly at one with himself and just wants a honest job, to make an honest living. As the story proceeds, Joe is increasingly pushed until the final turning point, where he makes the statement that this is not the America he came here for, with off-kilter music and skewed camera angles also indicating Joe's given up his hope for a peaceful life and decided take a new path. 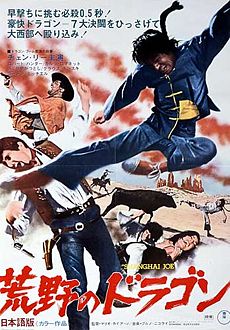 It is only when Joe is forced to fight that he responds. And his response takes the form of a severe ass whooping. This is the area likely to divide fans from non-fans. These scenes are filled with absurdities, such as weapons ranging from a yo-yo, to Joe's own pony tail. The slow-mo scene of a thrown plate hitting a guy in the face gets a good laugh out of me every time. There are quite a few scenes of Joe flying through the air, and usually in mid-jump, the scene is suddenly cut to Joe delivering a flying kick, or some other such move. The way these flying jumps are edited looks completely ridiculous, but also completely unexpected, and it is this unexpectedness that never fails to put a grin on my face. All of this absurdity is probably why many dislike the film, but its a huge part of what makes the film a lot of fun for me- especially with a few beers on hand.

Also with the extreme absurdity, gradually the violence becomes extreme as well. This makes for a unique mixture of elements. Its worth commenting here that the film is filled with a wide range of style. The light-heartedness brought by Joe's character, is met with a hate filled world, just as the laughter inducing ridiculousness is met with some brutal violence, which gets progressively nasty as the film advances. The beginnings include a bloody massacre of Mexican slaves, shot in the back as they are running for their lives. One particularly sadistic scene involves a Mexican being repeatedly shot, as he hangs helplessly from a rope. There's of course the famous, full-on eyeball gouging scene, where Joe pulls his enemy's eyeball out with his bare hands. And then there's Klaus Kinski, as the coolest bad guy in the film, Scalper Jack. He's got a trench coat full of blades and as the name implies, an affection for cutting off people's scalps. Caiano comments that this was the first and only film he was able to work with Kinski on, and that his next attempt to work with Kinski resulted in Caiano's walking out on the project.

The progressive violence helps the story advance without becoming dull, and offsets the sometimes light-heartedness, keeping it from slipping into a more comedic feel. At only one point does the story lull a bit, with the introduction of the female character, who seemingly appears out of nowhere. Luckily the same time she appears, we are introduced to another colorful bounty hunter, Pedro the Cannibal and we don't have to wait long for the action to resume.

As for the cinematography, there's lots of camera movement, low angle shots and spaghetti styled scene transitions. The camerawork and zany editing adds a ton of energy to the fights, which does wonders to offset the less than impressive choreography. Not much to comment on the music, as it has been simply been recycled from other sources- with a little sprinkling of "Chinese" melody layered over the top of the songs.

If you're a fan of kung fu films and you're looking to view Shanghai Joe in comparison, you're likely to be disappointed. The fighting isn't anything impressive in itself. Likewise from a western standpoint, there are no spaghetti styled duels or shootouts- Joe never even uses a gun. There is plenty of action though, with lots of bloody violence and if you're able to find enjoyment in obvious flaws- there are many good laughs as well. Grab a beer, remember to avoid comparison to its more serious counterparts, and you're likely to have a lot of fun with Shanghai Joe.

The DVD releases to look for would be either the Imagica/SPO disc from Japan, or the X-Rated Kult release out of Germany. The prints look nearly identical, both presented in the original 2.35:1 aspect ratio. Unfortunately the prints look faded and are in need of a nice video restoration. Both of these releases feature English & Italian audio options, but only the SPO disc has English subtitles for any English speakers wishing to view the film in Italian. The X-Rated Kult dvd also features the German audio track. In terms of extras, the main interest is the interview with director Mario Caiano, which is also present on both the SPO and X-Rated discs.