My Name is Pecos Film Review 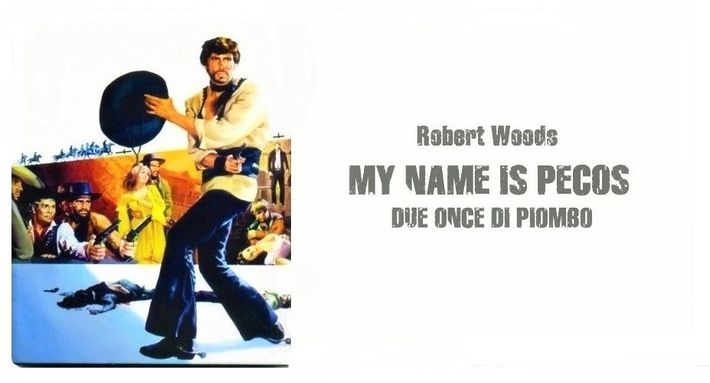 The first of two movies (See Database Page) starring Robert Woods as the Mexican pistolero Pecos Martínez. It offers a nice blend of two spaghetti western themes: that of the stranger intervening in a local conflict and the vengeance tale. When Pecos walks towards the town of Huston he not only plans to clean up the dirt, but also has vengeance on his mind: Huston is his birthplace, and the villain who is now terrorizing the townspeople, has massacred his family ...

The story is basically a retelling of Return of Ringo but with a nice reversal of stereotypes: in a spaghetti western the villains are usually Mexican while the hero is a so-called wasp, a white anglo-saxon protestant. In Pecos the hero is Mex and the villains are Tex. A white gang leader, Kline (or Clayne), has occupied the town because he wants to retrieve the loot from a recent robbery, that was stolen from by one of his own men, Brack. Kline is sure that Brack had an accomplice in town, who must now be in possession of the money. The Mexican stranger in town Pecos kills two of the villain’s henchmen in a duel, but is subsequently captured. In the true style of the spaghetti western anti-hero, he is nearly beaten to death before he can exact his terrible revenge ...

The reversal of stereotypes was very effective: the movie did fairly well at home and became an unexpected hit in third world countries where the Mexican anti-hero Pecos was interpreted as an ethnic hero, successfully standing up to Yankee imperialism. Actually Woods only discovered how popular the character was in the those countries when he and his girlfriend took a holiday in Senegal:

"We got off the plane and I was stopped at customs (...). I thought I was going to get strip-searched or something. [The ] took me to a room and asked: ‚Can I get a picture, my son’s name is Pecos.’ I had no idea it was even released there!" (*1)

To Marco Giusti the movie marks the beginning of the grade Z spaghetti - z referring to budget, not quality. It's obviously an ultra-low budget production, set in a ridiculously underpopulated town (even for a spaghetti western). The minimalist approach reminded me of A Stranger in Town that had a similar setting of an almost deserted western town that looked more like a ghost town. The producers didn’t like the original title Il Mio Nome è Pecos (which was respected in the international, English language version) and therefore changed it into Due once di Piombo, Two ounces of lead, short for Due once di piombo che ti arrivano addosso e ti ammazzano, Two ounces of lead that will come at you and will kill you (*2). It wasn’t the only thing that was changed: in the original plans Pecos was killed, but this was altered when viewers started throwing chairs at the screen during a pre-release screening.

My Name is Pecos is a spaghetti western of the gritty kind; the villains are nasty and the film also has those typical anti-clerical overtones thanks to the presence of a card-reading, double-crossing, slimy priest-gravedigger (very well played by Umberto Raho). The anti-hero gets some assistance of the townspeople (from a man who was mistreated by the villains and two women), but he must face the villains alone. Like the mistreated, now handicapped man explains:

"All you’ve got is a man who can’t move his fingers and two petticoats."

Woods looks very confident in the role of the Mexican gunslinger, even if the make-up and tape they used to pin up his eye-lids, make him look like a person from the Far East rather than the Deep South. The direction by Lucidi is mostly routine, but always competent and his film benefits from some inventive camera work by Aristide Massaccesi (yes, that’s Joe D’Amato). There is a great - and if you think about it rather bizarre - scene of a record player starting to play La Cucaracha after Pecos has shot two of Kline’s men.

Retrieved from "https://www.spaghetti-western.net/index.php?title=My_Name_is_Pecos_Film_Review&oldid=132777"
Categories:
Cookies help us deliver our services. By using our services, you agree to our use of cookies.