My Name is Pecos Review 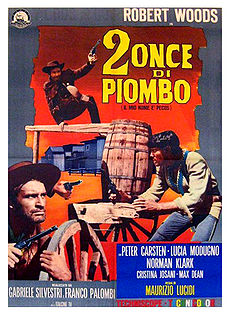 Skilled pistolero, Pecos Martinez, (Robert Woods) rides into the village of Houston and sets about clearing it of outlaws. But his motives prove to have revenge as their source. This was Martinez's birthplace and he has returned to settle a score with gang leader Clain (Pier Paolo Capponi). Clain, however, is preoccupied with retrieving the loot from a recent robbery which has been stolen from him by one of his own men and a local towns person whose identity he has yet to uncover. The hunt for the loot and Pecos' vengeance quest become inevitably combined and the only outcome is more bloodshed.

Robert Woods' movies are something like Forrest Gumps' box of chocolates. You never know what you might get. More than any other leading man appearing in Spaghetti Westerns I can think of Woods constantly varied his roles and the types of characters he played. Willing to play villains as well as heroes, light weight parts as well as dark dramatic ones and chance his arm as a Latino rather than stick to the safe ground of the laconic American. It is this risk taking which makes his films most interesting and, it must be said, of varying success. When you take chances things don't always come out as you'd hoped and this is the case with some of Woods films. However, it also means that when things do work out they stand out all the more. Films such as Black Jack, El Puro and Challenge of the McKennas spring to mind in this instance. And I believe My Name is Pecos can be added to that list of films where Woods took a chance and it paid off.

By 1966 there had been a whole bunch of westerns made in Europe and the Spaghetti style had been pretty well formulated. It differed in a number of ways from the American original but one element remained pretty constant. The hero figure, even if not as obviously white hatted as his earlier U.S equivalent, was still almost universally Anglo-Saxon in origin. Mexicans, for the most part, were still predominantly sidekicks, victims or villains. The gunslinging protagonist, however subject his morals or motivations might be in these new Mediterranean versions of the genre, was still cut from a racial template set out and stuck to for many years. In My Name is Pecos that template is adjusted. Pecos Martinez may have most of the attributes of a western hero (fast and accurate with his gun, slow talking yet quick witted, unwaveringly driven to eliminate the bad guys) but his racial make up sets him distinctly apart from the crowd. As his name suggests this avenging gunslinger is no W.A.S.P. He is proudly Mexican.

In fact the racial inversion of types extends to most of the cast. This includes not only the principle heavy, Clain, but all his gang. No Ninos, Indios or Pacos here. Strictly Steves, Jacks and Slims. And the secondary villain, Morton the bible wielding undertaker, beautifully played by Umberto Raho, as well as the corrupt and cowardly saloon owner; all are white american. While the saloon girl who helps the hero is not only Mexican but, in a further inversion of expected types, not a whore. Of course, I'm not suggesting that all characters in previous westerns had completely and slavishly conformed to the norms of the genre. But I do believe that My Name is Pecos marked a radical shift. Pecos is not a Mexican hero a la Don Cesar Guzman in The Implacable Three who was essentially an hidalgo landowner or Cuchillo from The Big Gundown who is a knife throwing petty criminal. He is an avenging gunslinger who holds the moral high ground and cleans up the town. The independent man of strength and honour who the weak and helpless townspeople look to and depend on for salvation. In a different era and with a different face he could have been played by Gary Cooper. It is this that makes the characters racial make up so marked. He is playing a role traditionally set only for a white american but he is overtly mexican. As if to state his place even clearer he announces in the saloon "I don't like whiskey. I drink tequila!" 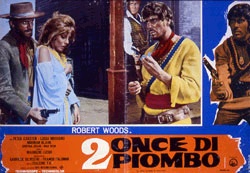 But for all the interest this role reversal might have it would be of no import if the film itself failed to engage. Thankfully, this is not a one trick pony. Pecos proves to be an enjoyable character and the story moves along with all the attributes you could ask for from a cleaning up a bad town/revenge western. Lucidi's direction is competent if not inspired, the script is decent and the acting, from some individuals in particular, is excellent. For a six foot four caucasian from Colorado Woods inhabits the body of Martinez with surprising ease. Elaborately taped eyes notwithstanding (I'm really not sure why it was felt neccesary to pin his eyes up in such a painful looking fashion) he convinces as the embittered hero and the taciturn nature of the character allows him to underplay the part. Something which shows Woods at his strongest. The rest of the cast perform well also. Luigi Casellato as Eddie the saloon owner plays an interesting mix of greed and fear but comes across as a man at odds with his deeper morals trying to make his way in a dangerous and amoral environment. While Umberto Raho's Morton is a delightfully slimy individual; combining religious words with treacherous and wicked deeds in a truly enjoyable manner. We even get the old pistol in the bible routine for good measure.

My Name is Pecos is a solid spaghetti which combines all the conventions required in a film of this type with an interesting twist in the angle of the racial make up of the key personel. And this, for me, is what good genre filmmaking is all about. It delivers what I expect but tweaks the boundaries a little to keep it interesting. It's not Citizen Kane. Nor does it try to be. It's a fun action drama with some interesting characters well played which features some tension and the required amount of blood letting leading up to a showdown at the end. Frankly, that's pretty much all I ask from a western and as a consequence I came away from this one satisfied and happy.

The version of this film I watched came from the Brazilian release. It has a reasonably clean picture and english audio but is unfortunately full frame. As a result some of the visual impact of the film was reduced. It would be nice to see this in its correct aspect ratio and I believe it is a film which deserves a better release. Recommended. --Phil H 10:58, 2 July 2009 (UTC)

Retrieved from "https://www.spaghetti-western.net/index.php?title=My_Name_is_Pecos_Review&oldid=130202"
Category:
Cookies help us deliver our services. By using our services, you agree to our use of cookies.