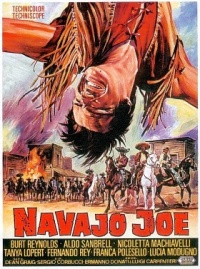 Sergio Corbucci's Navajo Joe was originally meant to be a star making vehicle for an up and coming young American TV actor named Burt Reynolds. Although, this Spaghetti Western classic does not reproduce the marvelous debut of another American actor named Clint Eastwood, it is a solid revenge film with some good action and direction. As I was watching the opening credits, I noticed that the 1st Assistant director was the Italian genre director Ruggero Deodato and the script was co written by 70s Italian Crime film master Fernando Di Leo (Mr. Scarface, Wipeout).

As the film opens we see a young Indian woman at the edge of a stream washing some clothes. A man on a horse gallops up to the other side of the stream. As he stares at her she smiles shyly, but suddenly, we see the man pull out his revolver and he shoots her dead. His band of comancheros rides up from behind and the man kneels down and slices the Indian girl's scalp off. As his band of thugs massacre the entire tribes' village, Ennio Morricone's (who uses the pseudonym 'Leo Nichols' for this film) brilliant theme score kicks in with the sounds of Indian screams. The opening credits roll as the man and his group of cutthroats ride through the wildnerness menacingly.

When the men come to a large canyon, they spot a figure on top of the mountain watching them They realize it's Navajo Joe, who has been trailing them since he found out his tribe was massacred and scalped. Duncan (Fernando Rey) sends two of his men to kill Joe. They ride up to the top of the hill, and they just see Joe's horse. Suddenly Joe appears as he jumps through the air and tackles one of the men. They fight and Joe kills the two. As Duncan, his brother and the men wait, they see a horse trotting down from the hill with 2 dead bodies tied to it. Joe's just begun his rampage of revenge.

Duncan and the men then ride to a small town. When they arrive Duncan sees a Wanted poster with him and his brother on it. Hes not happy. The men make their way into a local saloon where some sexy girls are dancing in a burlesque show while a old man on a banjo plays along with the piano. Duncan and the men cruelly disrupt the proceedings. After they sit down, a local contact of Duncan tels him that there is a train filled with money traveling to a town nearby called Esperanza. He tells Duncan to rob the train and get the money to him. Duncan agrees, then the towns Sheriff shows up and tells Duncan to leave. When Duncan shows all the Indian scalps he has, the sheriff isn't impressed. He sees that Duncan is nothing but a thief and murderer and tells him to get out of town. The burlesque girls and the old man hightail it out of there when they see trouble is brewing. Some of Duncan's men chase the wagon with the girls and when they catch up they try to accost them, but Joe saves them and shoots the thugs. The girls explain that they have overheard Duncan is going to rob the train, Joe realizes this is a perfect chance for him to get Duncan and the other killers.

As the train rolls towards Esperanza, the conductors notice logs in the middle of the tracks in the distance. They stop the train, and when they do, the thugs come up shooting and they kill the passengers and conductors. They hijack the train and camp out near it until Duncan shows up. Navajo Joe is lurking in the shadows and he disguises himself as one of the men. When another thug asks him to wake up he stabs him!

Navajo Joe brings the train back to town and explains that all the money is there. The townsfolk don't believe him at first, then they check and its true. One of the townsfolk is an informer for Duncan and he rides out and tells Duncan that he'll help him get the money back. When Duncan and his men get to town they enter the bank only to find that the informers story wasn't true. The money isn't there. Duncan shoots the informant, and the men take an innocent Indian girl hostage and Joe has to give himself up in order to save her life.

The gang proceed to brutally beat Joe in classic Spaghetti Western fashion. Then they string him up and let him hang upside down. Luckily, he gets some help from the burlesque banjo player who shoots an arrow from a distance and cuts one of the ropes holding Joe. Joe escapes to the hills and the next day Duncan and his men go looking for him. Joe kills all the men one by one and finally completes his rampage of revenge, saving Duncan for last.

Navajo Joe isn't the greatest Spaghetti Western I've seen. It's nowhere near as finely directed as Sergio Leone's films, but it is a good story and the soundtrack by Morricone is one of the best things about it. Director Quentin Tarantino used two of the songs from this film for his Revenge epic Kill Bill. The two songs he used were "A Silhouette of Doom" a suspenseful buildup theme and "The Demise of Barbara/The Return of Joe" theme which is filled with heavy electric guitars and Indian screams. Pete R.