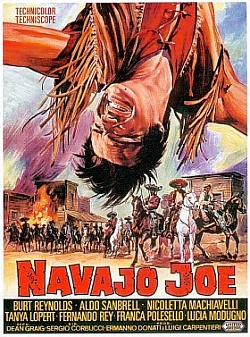 The three most respected directors in the Spaghetti Western genre are pretty much universally accepted to be the three Sergios. That is: Leone, Sollima and Corbucci. These three film makers are responsible for most of the 'canon' films of the genre and are, quite rightly, held up as the masters of the Spaghetti Western form. I heartily agree with this categorisation but would add one small, but important footnote. That being that two of the above Sergios can be relied on to have produced a consistantly high standard of work, whereas one of them, although responsible for some truly great films has a decidedly hit and miss record in the genre. That Sergio would be Mr Corbucci and Navajo Joe, in my opinion, is most definitely one of his misses.

Now don't get me wrong. I am not saying that Navajo Joe is a bad film as such. Just that, based on the high standard Corbucci has set in some of his other work, this film is sub par. It's OK, just not that great. And that is probably the rub when it comes to Corbucci's lesser works. When a director has created classics such as Django and The Great Silence it is inevitable that anything that fails to match those high standards will appear even worse than other directors work by comparrison. If Demofilo Fidani had directed Navajo Joe I might well consider it his masterpiece. The fact is I expect more from Corbucci.

Having said that, there are some genuine merits to the film including some worthy performances from genre stalwarts who rarely fail to deliver. Aldo Sambrell, as Duncan, is suitably nasty as the central villain, a role he can always be relied on to play with smouldering relish. Likewise, Fernando Rey is equally reliable as the saintly priest, Brother Jonathan, while Nicoletta Machiavelli is as lovely as always in the role of Estella, a character who is unusually pivotal for a woman in a Spaghetti Western. In addition, Navajo Joe stands as one of the few films featuring Lorenzo Robledo in which the genre journeyman lives through most of the picture, dying only ten minutes before the end. Possibly a record for the oft slaughtered bit part player who has come to a sticky and brutal end within five minutes of appearing in more Spaghetti Oaters than I can count.

But for me, the film is more memorable for the things that don't quite work rather than the things that do. Burt Reynolds as the title character, for instance, just doesn't quite gel in the role for me and never looks really comfortable in the part. This could, of course, be down to the terrible black toupe he wears throughout the film but considering the number of equally unconvincing hairpieces he has sported throughout his career without ever showing any significant embarrassment I suspect not. Rather, he was just a bad fit. The wrong actor for the role and if he is to be believed in numerous interviews a man who hated the whole process of making this film. In fact he has been quoted as saying that making Navajo Joe was the worst experience of his professional life. All I can say is, if that is true, he should try and get out more.

But it is not just Reynolds that disappoints here. Amazingly, the maestro, Ennio Morricone also turns in a rare below par effort in the musical score. It is relatively rousing and by no means bad but really not of the quality we expect from the great man. Using the pseudo Native American pastiche sound which he employs in this film frankly smacks of laziness. A man going through the motions and turning in a score to order rather than bringing something genuinely inspirational to the table.

What we do get, however, is plenty of action and violence; the sort of stuff Corbucci can always be relied on to deliver in spades and there is enough of this to send most fans away reasonably happy without being overwhelmed. The story thumps along with equal measures of revenge for slaughtered family and stolen bank money themes. It even has some interesting nods to racism and prejudice issues. The problem is I want more from Corbucci than that. He was a director responsible for genuine innovations in the genre and he was capable of creating haunting moods in his films that few others could match. As a result, when I sit down in front of a Corbucci film I expect to go away with something lasting; something substantial. But in reality, for every masterpiece he created he also created a run of the mill, bog standard action flick where the only thing really memorable is a bit of gory violence. The fact that this is one of the shortest reviews I have ever written tells you how little of worth I found in Navajo Joe.

That being said, I must emphasise that a below par Corbucci film is still better than most others offered by lesser directors so by all means don't be put off by my less than enthusiastic review. Just don't expect a masterpiece. You won't find it here.

Retrieved from "https://www.spaghetti-western.net/index.php?title=Navajo_Joe_review_by_Phil_H&oldid=43042"
Category:
Cookies help us deliver our services. By using our services, you agree to our use of cookies.