A few years ago a young Italian, while reading an article on Tarantino's Kill Bill, was attracted by a pseudo of Uma Thurman in the original script: Arlena Machiavelli. He soon found out that Tarantino was paying homage to an Italian actress called Nicoletta Machiavelli, who had been a diva of Italian cinema in the sixties and seventies of the past century. The young man's family name was Michiavelli too, and shortly after, he discovered that this Nicoletta was his half sister. He also discovered why Nicoletta had often been called the least accessible of all Italian actresses. Contact was limited to telephone and e-mail, and she refused to give him much help in reconstructing her career and life for an Italian on-line film magazine.

"I have seen very few of my films, actually, I'm not interested in them."

Nicoletta Machiavelli was born in Stuffione (near Modena) on September 8, 1944, from an Italian father and an American mother, and learned to speak both languages as a child. She is a descendant of the famous Italian political philosopher and diplomat Niccola Macchiavelli (1469-1527) and was raised in Firenze, where she studied painting in the art school of the Accademia, one of the most prestigious art schools in the world (in the museum of the Accademia, some of Michelangelo's most famous works can be admired, such as his David). Her brother Brandino lived in Rome, in the same apartment block as a costume designer of the Laurentiis studios, who told him his boss, Dino de Laurentiis, was looking for a ravishing beauty who could play Eve in John Huston's The Bible, one of those large scale Hollywood productions largely shot in Rome for financial reasons. Nicoletta went to Rome and signed a seven year contract for the Laurentiis studios, but was eventually not chosen for the part of Eve, because John Huston preferred a blonde actress.

She made her first screen appearance in Una Questione d'amore (1965), a romantic drama, and made a few other hardly noticed - movies before she was cast as an Indian girl next to Burt Reynolds in her first spaghetti western Navajo Joe. She was not very happy with her part ("You have to wait 45 minutes to hear me say something, and then it's not my voice you hear"), but today she thinks making this movie was an essential experience in her life: I played the part of a Navajo girl, and fifteen years later I was a guide in the largest Indian reservation of the United States, with the most beautiful landscape in the world falling in love with the way of life of those fascinating people". After co-starring in The Hills Run Red, she was offered the leading part in Giarrettiera Colt, a kind of feminist Zapata western. It was a tough experience, Nicoletta had to learn how to draw a gun quickly from her garter (which wasn't easy), and also had to follow lessens in horse-riding (which was a real torment, especially for certain body parts). But both her brother (who played a French officer) and her mother were on the set to support her. Although the film wasn't received well, she was discovered as a sex symbol and offered several parts in saucy comedies, but every now and then she re-appeared in spaghetti westerns, such as Franco Giraldi's A Minute to pray, a second to die, Sergio Garrone's No Room to Die and Ferdinando Baldi's Hate thy Neighbour.

Nicoletta considers the year 1969 the great turning-point in her life. She received good reviews for her part in the action movie La Cattura, alongside David McCallum (Ilya Kuryakin from The Man from U.N.C.L.E.), and while making a guest appearance in an installment of the TV series It Takes a Thief, shot in Porto Ercole, she met her future husband. But most important of all, her contract with Di Laurentiis comes to an end at this time. She's fed up with making westerns and reckons better offers will come her way now. In the years to come, she'll work with directors like Ettore Scola, Dino Risi and George Lautner, and is cast alongside several stars, among them Marcello Mastroianni and Alain Delon. Some titles of the period are L'important c'est daimer (Andrzej Zulawski, 1975), Il Trucido e lo sbirro (Umberto Lenzi, 1976) and Tony Arzenta (Duccio Tessari, 1973). But she is not at ease in the world of glitter and glamour, and her sharp tongue doesn't make her popular among her colleagues. Her description of Delon is significant: "A total zero, that Delon, a great erotomaniac , megalomaniac and cocaine addict".

In 1977, at the age of 33, she decides to cut her cinematographic career short and to start a bohemian life. For more than fifteen years, she works as a tourist guide, a work she would pick up again later in her life. Ironically she will be remembered for exactly those films she wanted to escape from, the spaghetti westerns she made during her contract with Dino de Laurentiis. Her half-brother puts it like this: How many of those films she made after her time with De Laurentiis have we all seen? Nicoletta settled in Seattle, working as an interpreter and Italian language teacher at the University of Washington, and also giving cooking lessons. She also was present at the Spaghetti Western Festival in Almeria and did some interviews that were added as a extra features on DVD releases.

For an article on Nicoletta, by Ann Bauer with some additional info by Chris Casey, see: Nicoletta Machiavelli, bella donna di Seattle 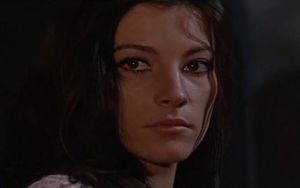 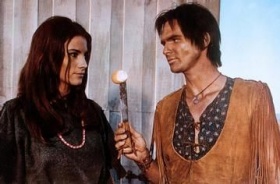 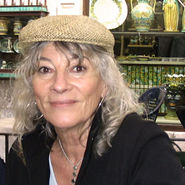 Simon Gelten is a long time contributor to the SWDb. "I'm not as old as Tom B. but I'm working on it. I hope to catch up with him by the end of the next decade.", he says. Simon saw all movies by Sergio Leone and several by Sergio Corbucci in cinema, most of the time in Eindhoven, the city where he was born. Currently, Simon is living in Turnhout, Belgium. Simon is active within the database as both Scherpschutter and his alter ego Tiratore Scelto.
Retrieved from "https://www.spaghetti-western.net/index.php?title=Nicoletta_Machiavelli&oldid=108507"