By Ann Bauer (with additional material by Chris Casey) 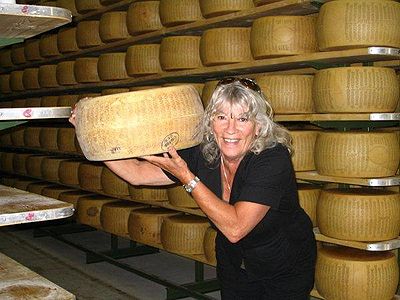 On the phone, Nicoletta Machiavelli has a thick Italian accent. It hangs ornamentally all over her English, all the words ending in vowels, a hearty "Ciao!" as she signs off. So it is a surprise when she appears at the coffee shop downtown where we've agree to meet; a small, tanned, still-stunning 65-year-old woman, who speaks with barely any accent at all.

The explanation: She grew up bilingual in the countryside near Modena (where the best balsamic vinegar is made) and then, after her father left the family, in Florence with her American-born mother. “All my life, I’ve been looking for my place,” Machiavelli says, dipping her biscotti into a cappuccino and pausing to take a bite. Every man in the place is watching her, including the ones who could be her sons. “When you’re bilingual and bicultural you never really feel like you belong. The only way you are right is by moving. You’re always a foreigner.” She shakes her head, long hair glinting blonde and silver, and laughs.

At this point, Machiavelli has lived in Seattle for 20 years, which is as long as she’s lived in any city. And she concedes that this — despite her love of sun and heat; places where she can go “naked and barefoot” — may be her home. That after a lifetime of scrounging and searching, she’s finally found a way to support herself that both entertains her and honors the parts of Italy she loves.

Since 2004, Machiavelli has run small tours of her native country for local residents. She has two itineraries — one going to Sicily, the other to Emilia-Romagna — that includes culture, history, art, shopping, and food. “I’m just a one-man band,” she says, grinning. “No secretary. Nothing fancy. I’m not Rick Steves. I just like bringing people to see things that are worthwhile in Italy, like the series of little fishing villages connected by bridges. Or the old man who collects porcini mushrooms the size of plates.”

She was born in 1944, the daughter of a Florentine man who was descended (“crookedly”) from Niccolo Machiavelli. And though she was named after the renowned writer, Nicoletta Machiavelli says she “can’t stand him” or his work.

“All I heard about in my youth was Machiavelli and how great he was,” she says. “Everything about my mother’s family was lost.”

When she was 7 years old, Machiavelli found her father in bed with the babysitter. He had another family across town for whom he eventually left her mother. Machiavelli shrugs. “He was an Italian in the 1950s and this was normal.” Even after her father defected, they continued to live in a room above his parents. He visited on weekends. Her mother worked long days to support them but never complained.

When she was 17, Machiavelli was discovered by a talent agent from Rome. He asked her if she wanted to be in movies and she leapt at the chance to leave Florence, where she’d become involved with a married man. The director Sergio Leone had made "Spaghetti Westerns" wildly popular and Machiavelli was cast in a series of B-level features, including Navajo Joe, with Burt Reynolds. But her film career lasted only a few years.

“I wasn’t a good actress,” she insists. “I was just pretty. I liked being outdoors, but I hated it when they dressed me up or put makeup on me. And I hated the idea that these people were making money off me.” One day she gave herself a homemade tattoo (twisted snakes above the thumb of her right hand) because she wanted to make the director angry. It worked. When he realized he couldn’t realistically cover the tattoo, he threw her off the set. 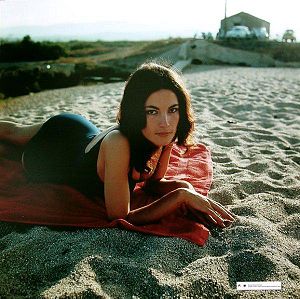 She did, however, go on to make television appearances and a few more films in Italy, West Germany, the UK, and France (ending her acting career with two television appearances in the early 1980's). But at the same time she was waking up to the political movement, Machiavelli says. And she used the money she made to roam the world. India, South America, Greece. She became pregnant by a man who took off shortly after, forcing her to move in with her mother. This, Machiavelli says, was one of the best things that ever happened to her: Alone together for the first time, the two women grew close. But her mother died suddenly, of a brain aneurysm, just a week before her son, Nirjo, was born in 1973.

She supported herself and Nirjo by tending bar or teaching English. They lived simply, wherever Machiavelli could find cheap rent and jobs. In 1980 she reunited with a childhood friend, Pietro, and married him. Together, they visited San Francisco the following year. It was the end of the hippie era and, Machiavelli says, a perfect time for her to land in California. European tourism had become a big industry and Italian food was hot. She and Pietro sold their return tickets and bought a cheap car. They moved to Los Angeles where Nirjo — an 8-year-old who spoke two languages but could neither write nor read — finally started school. Pietro became a sign painter. Machiavelli went to work as a tour guide, traveling six months a year.

They were happy in L.A., until the earthquakes of 1988. “My husband just freaked out,” she says. “He was a bit of a dramatic Italian. When the house started to shake he ran out in his underwear, screaming, which is exactly what you’re not supposed to do. Then, when it was over, he said we had to leave.”

So they came to Seattle where Machiavelli started over, teaching private Italian lessons. And though her marriage ended in 1992 (Pietro, who had never been happy as a conventional working man, moved to Bali), Machiavelli stayed.

These days, Machiavelli makes her home in West Seattle. Her son Nirjo manages a Belltown nightclub called Venom in which, Machiavelli says, she has been forbidden to step foot. But they have dinner together most Sundays. “He’s the opposite of me,” she says. “Let’s not travel, let’s make a lot of money. He doesn’t want children. But he’s my only family and I love him dearly.”

She does have a longtime boyfriend, John, with whom she tried living for a while. But neither of them was happy this way so, with her help, John moved to Italy where he lives on a boat. Thus, her frequent trips back to the home country.

Machiavelli's travel business started in 2004, when a dining club owner asked her to guide him and his friends through Sicily. Until then, Machiavelli had always worked for someone else. But she found that if she kept the groups small (under 15) and focused on food, she could run a tour very effectively by herself.

“The cuisine in Sicily is so layered, because it draws from the Arab, Middle Eastern, and Byzantine.” She slips into a lilting patter. “There are all these merging tastes: sweet and sour, honey and fennel. I take people to eat with this chef who was discovered by the CIA [Culinary Institute of America] and he could go anywhere he wants but he just stays in this teeny Sicilian town because he loves the place.”

This year she’s added a trip to Emilia Rogmagna — an area she admits is flat and “not so attractive” — because it offers authentic Parmigiano-Reggiano, Bologna, and Proscuitto. “Literally every 20 miles in this region, the wine, cuisine, and dialects change,” Machiavelli says. “Culinary traditions there are being continued by young people, such as a 26-year-old girl who makes a famous dough for fresh pasta that she rolls out by hand.”

Her goal is to get to the point where she is spending half her time in Italy, with clients or with John, and the other half back in Seattle teaching language and cooking lessons. She’s always worked 10 hours a day — as her mother did — and has no intention of slowing down.

"I’m very happy that I ended up in this country,” says Machiavelli. “If I had stayed in Italy I’d be married to some Florentine with a stuck-up nose and live in a villa and have a bunch of children and get my nails done every day. But here ... .” She opens her hands, adorned only with one small turquoise ring, and speaks in a hearty American tone. “I’ve worked as an actress and a waitress and a tour guide; I’ve scrapped and scrounged. I think this is more my kind of life.”

Retrieved from "https://www.spaghetti-western.net/index.php?title=Nicoletta_Machiavelli,_bella_donna_di_Seattle&oldid=52663"
Categories:
Cookies help us deliver our services. By using our services, you agree to our use of cookies.