Night of the Serpent Review

Until recently, this was one of the most elusive titles of a respected director of the genre, but it was rescued from oblivion by an excellent South-African release. The film seems to divide the spaghetti western society : Petroni himself thinks it's a minor effort, others, like Spanish author and film critic Carlos Aguilar, think it's his best work, which is high praise, knowing that Petroni was also responsible for genre classics like Death rides a Horse and Tepepa. Aguilar thinks it's one of the most unusual spaghetti westerns, telling a story about redemption that is almost on a par with Joseph Conrad's Lord Jim. Others have said the movie offers a vision of Mexico that is a blend of Buñuel and Peckinpah. But it has also been called a snooze fest.

Like Tepepa, Night of the Serpent is set in Mexico, and like Death rides a horse, it has a rather confusing opening scene, taking place during a thunderstorm. But unlike Tepepa it is not a Zapata western, and unlike Death rides a Horse it is not a revenge movie. It's a story about guilt and grief, of bad memories blacked out by alcohol and the desire for redemption. Lieutenant Hernandez (Luigi Pistlilli) investigates a case of manslaughter, very clumsily covered up by those responsible for it, a respectable alcalde, a homosexual barkeeper, a cigar smoking prostitute and a sex-hungry sacristan (yes, a sex-hungry sacristan). This assortment of misfits, all related to each other, is after the fortune of a boy, who has inherited $ 10.000. Hernandez wants a part of the money too, and hires a gringo turned alcoholic (Luke Askew), who lives with a gang of local bandits, to kill the boy. But the confrontation with the child, triggers a series of memories that force the gringo, who once was a great gunslinger, to face his actual situation and to contemplate the facts that led to his psychological breakdown.

Night of the serpent is indeed a very unusual spaghetti western. It's a moody film, but the moodiness is totally different from The Great Silence or the Twilight spaghettis from the late seventies. There are some similarities to El Puro, that has an alcohol-related redemption theme too, but they're rather vague. All in all Night of the serpent is a unique movie within the genre. To begin with, it is very oddly cast. Luke Askew had been in Will Penny (and would later appear in several western classics or semi-classics, among them Pat Garret and Billy the Kid, The Culpepper Cattle Company and The Great Northfield Minnesota Raid), but he was presented in the Italian press as 'a hippy actor', and the producers had obviously contracted him because of his appearance in Easy Rider. The cigar-smoking prostitute is played by Cuban sex-bomb Chelo Alonso (no doubt her cigars were real Habanas, La Gloria Cubana, about $ 300 a box) and there's also Polish ex-model and Miss World finalist Magda Konopka (who would also be in Blindman and had worked with Petroni before on A Sky full of Stars for a Roof), who was leading a life of luxury and debauchery in Italy, and had scandalized the country with a series of photos of her naked body, shot by a Roman nobleman on his own property. The sacristan, a senior who gets raving mad at the sight of Chelo Alonso's knickers, is played by Franco Valobra. I had never heard of the guy, but apparently he was an erotomaniac known to most Italians in those days. The overall atmosphere of moral and physical decay, and the presence of a hippy, an overheated senior and two notorious sex-pots almost gave me the idea that the movie was a sort of indictment of the crazy sixties, but this seems to make little sense. Like some have assumed, they probably were intended to give the film a 'noirish' feel in the tradition of Raymond Chandler or James M. Cain, whose novels were populated with sexually degenerated dignitaries and social misfits. Or maybe it's the Buñuel connection, spotted by some. 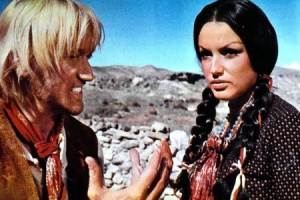 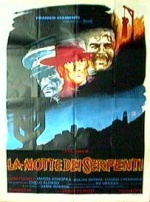 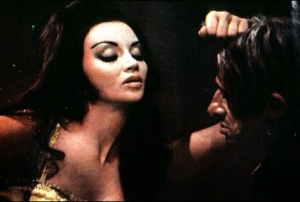 The spaghetti western was a typical catholic genre in the sense that it adopted the strong baroque imagery of the catholic iconography; but despite a preference for the crucifixion theme, it seems more oriented towards the Ancient Testament than to the Gospels. The basic ingredients of most spaghettis is greed, violent death and vengeance, not forgiveness or redemption. (The crucifixion is usually more shown as a straight punishment, not as a sacrificial death in Christian sense). But Petroni's movies often have a less uncompromising atmosphere; people usually are confronted with the consequences of their acts, and forced to make moral choices under psychological pressure. Very often they also seem to be looking for the person they missed most in their lives. Death rides a Horse is not only a story in which mutual respect eventually is favoured over hate and revenge, but also a story about a son without a father and a father without a son. In Tepepa, his most complex movie, a young man, a European doctor in Mexico, must chose between his Hippocratic oath and his desire for revenge, when he's treating a mortally wounded man he has learned to like, but who was responsible for his fiancée suicide, without understanding what he had done wrong ('every man would've done the same').

Compared to these movies, the script of Night of the serpent seems a little superficial. It's perfectly serviceable, but there's no Franco Solinas at work here. Askew's decision to side with the child and turn against those who hired him, is a bit too obvious, too easy. There's no sense of spiritual pain when he has to make his crucial moral choice (that is, his pain is not related to the choice). But this doesn't mean it's a bad film. As always, Petroni tells his story slowly, deliberately, using the flashback structure - disorienting camera-angles to illustrate Askew's distorted view - to good effect, but we're past the hour mark before the first real action takes place, and some viewers might have lost contact with the film by then. The ending, with the bandits coming to the rescue in true cavalry style, is a little gem. Petroni's direction seems to falter here and there. Some scenes are great (there's a wonderful deep-focus shot, with Askew reloading his gun and Pistilli riding off in the background), others seem rushed, or at least a little under-directed. It must be said that he isn't really served by the English dub; it's loud and clear, but not all voice actors are great actors, if you know what I mean. Especially the opening scene suffers from it. Riz Ortolani's score is a little out of the ordinary, and not always breathing the real spaghetti atmosphere, but it's very likeable none the less.

Some words on the title(s): The original title La Notte dei Serpenti, means Night of the Serpents. Plurals are easily overlooked in Italian (words ending on -i usually are plurals), but the plural form is essential here: there's more than one serpent, and the title refers to the night in which they start to eliminate each other. The alternative title Ringo Kill is nonsense; it would make more sense to call it Gringo Kill, after all Askew is a gringo and hired to kill someone. And indeed: the film apparently has an alternative Italian title too: Gringo Uccidi... è la Notte dei Serpenti.