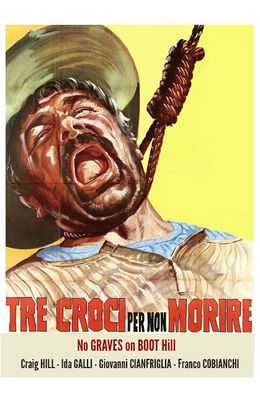 Sergio Garrone's second western as director. It's an entertaining little movie, made on a reduced budget, that offers lots of action, but the mix of western, giallo and buddy movie also works a bit confusing
_____________

Three men - a horse thief, a bounty killer and a philanderer - end up together in the same prison cell with a young Mexican, Francesco, who is accused of having raped a young girl and shot her father. He claims to be innocent, but all evidence seems to point in his direction, so if nothing happens, he will be hanged. At night the three are mysteriously released and brought to a priest, who makes them an offer: They have all three sinned, but will now get the chance to redeem themselves by saving the life of an innocent man. The boy's father, Mr. Ortega, also offers them $30,000 if they're able to prove that Francesco is innocent ...

No Graves on Boot Hill was Sergio Garrone's second western, following If you want to Live ... Shoot!, preceding the two movies that would establish his name, No Room to Die and Django the Bastard. He called it his personal favorite (*1). The script is giallo-esque but there are also a few hints at social commitment in relation to the way minorities - in casu Mexicans - are treated in the Deep South. When Dolores (Ida Galli), the Mexican woman who seems to know more about the case, is asked about Francesco's guilt, she says: Maybe the guilt of that boy could be just the bad luck to have been born a Mexican – like me.

The film was entirely shot on Italian soil and has a cheap look, but there are a few nice photographic illusions. When the three ride into a western town, they seem to approach the gallows, but when they get closer, it becomes clear that it's a model, hold by one of the movie's villains, not by means of a welcome. Cianfriglia/Wood has a nice introduction scene in which he fakes a broken arm to surprise his opponents (like some have noticed it's the same trick that Benny Hill used, not to shoot opponents, but to pinch women in the buttocks!) and the finale has one of the craziest shooting tricks you'll ever see in a western: when he's cornered, Cobianchi throws his gun belt in the air, then shoots at it to turn the belt into a cluster bomb of exploding bullets, whose fragments blind his opponents. Seeing is *not* believing. 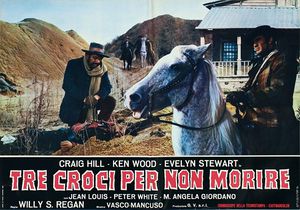 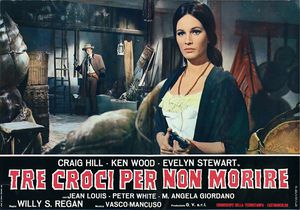 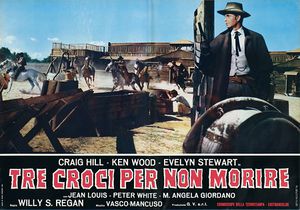 The premise of the three no-goods saving a wrongly accused fourth is interesting, but the tone veers a bit too much from half serious to dramatic and comedic, with Garrone throwing in fistfights every time he doesn't know how to move on with his story. The movie is entertaining, but never really compelling. I'm not a fan of Craig Hill, at least not in these Lothario type of roles and Cianfriglia/Wood has a great face, but is essentially a supporting actor. On the other hand Cobianchi (who co-wrote the screenplay) is a nice, overweight, devious type of Mexican, the kind of guy you'd probably despise in real life, but like in a movie. Both common English titles Three Crosses not to Die (a translation of the original title) and No Graves on Boot Hill refer to the final scene of the movie, that will surprise most viewers but doesn't make too much sense.

Simon Gelten is a long time contributor to the SWDb. "I'm not as old as Tom B. but I'm working on it. I hope to catch up with him by the end of the next decade.", he says. Simon saw all movies by Sergio Leone and several by Sergio Corbucci in cinema, most of the time in Eindhoven, the city where he was born. Currently, Simon is living in Turnhout, Belgium. Simon is active within the database as both Scherpschutter and his alter ego Tiratore Scelto.
Retrieved from "https://www.spaghetti-western.net/index.php?title=No_Graves_on_Boot_Hill_Film_Review&oldid=122734"
Category:
Cookies help us deliver our services. By using our services, you agree to our use of cookies.