No Graves on Boot Hill Review 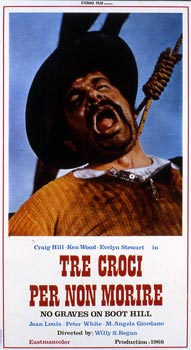 Back to Tre croci non morire

BACKGROUND INFORMATION: Garrone appeared quite late in spaghetti-land and was the last of the 5 Sergios arriving to direct films of the genre. And of the films I’ve seen of his, none have disappointed me so far. But, he does tend to polarize opinions, and according to our own forumites, (and to Shobary’s site) not everybody rates him as highly as I might do. I hope this review may encourage others to watch this (imo) lesser known gem, and to formulate and provoke more views – whether or not, they may support my own. (I still need to see The Outlaw Rider/If You Want to Live … Shoot! [1968] and Kill Django … Kill First [1971], and I suppose it is possible, of course, that I may dislike these.) [I have since seen The Outlaw Rider, and although it could be accused of trying too hard to be all things to all men, it remains an entertaining and reasonable debut into the genre.]

No Graves on Boot Hill is probably the second film made by Garrone. The other of his films released that year was The Outlaw Rider but this was shown at the front end, rather than at the back end, of 1968. Django the Bastard [1969] is probably Garrone’s most (in)famous film and equally probably, divides the opinions most. No Room to Die [1969] is also quite well known, mainly for its more famous (these days at least) spaghetti western characters – Steffen and Berger … and for the cool 7 barreled shotgun that Berger’s preacher character uses. Which leaves the remaining film – Vendetta at Dawn [1971] which I still think this is a better film than some others do (despite it having my unfavorite George Eastman in it). And Garrone was no slack hack producer! He was involved in all of these films as either the writer, or had some screenplay credits. (Mind you, the Fidani argument blows that premise to pieces). With No Graves… he both wrote it and shared the screenwriting credits with his close co-worker throughout all of these films – Franco Cobianchi.

No Graves on Boot Hill is probably or arguably – (maybe Kill Django… takes that honour) the least seen or well known of Garrone’s western films. There’s a simple reason for this … (maybe) … it has no decent dvd release, that I know of, to make it easy viewing. My own copy is a vid-rip dvdr who’s quality is less than perfect, which might explain why it’s languished towards the bottom of the to-watch-pile for so long.

But now it’s surfaced … and today, I was somewhat pleasantly surprised to find that No Graves on Boot Hill could be good enough to make my Top 20 (gasp!). And I was also surprised, although maybe I shouldn’t have been, to discover that another knowledgeable forumite held completely opposing views to my own. Great! That’s what spaghetti-land is all about!

So to a synopsis and my thoughts on the film … which

MAY (will) CONTAIN SPOILERS:

We are introduced to our three main protagonists in turn – and each one gets thrown into jail. A bit of spoilerism needs to be included here to explain and add colour to their different characters and their respective roles within the film.

Firstly we meet the slightly comedic, slightly cartoon, slightly overweight, character of Paco, a Mexican horse-thief. And he’s going to try to steal a horse via stealing some carrots, whilst the potential buyer and the seller are involved in an argument started by Paco over whether said horse is suffering from asthma and sunburn. So how good is this early dialogue …? “She’s worth $20 – every penny!” “Take 5 off for the sunstroke.” “15 – heck … you can’t even buy a 2 legged snake for that.” “If I had a 2 legged snake I’d make a $1000 showing at the carnival.” “So would you with an asthmatic horse – just think, 10 cents a wheeze!”

For the last of our three amigos, we get another cliché – but a necessary one – in the form of the mean and moody bounty killer. With a trick literally up the sleeve of his (broken) arm, another great set play is put in motion as he gets to gun down the 2 hombres who have met him, guns already drawn. And he also receives a similar invitation from the sheriff regarding accommodation for the next month.

So now in jail, they meet an apparently innocent man, Francesco, who is the son of a Mexican landowner, Senor Ortega. The premise for the story is that they will be pardoned and handsomely rewarded if they can return within 10 days with proof of the boy’s innocence regarding the rape of Betty Fletcher and the murder (a bit of early slo-mo bullet-in-the-head stuff) of her dad. She’s in a coma, and meanwhile the Fletcher gang are out to make sure Francesco hangs for these crimes.

The contract, and payment slip, is divided between our 3 heroes and off they go on their respective individual, and shared, adventures. It has been suggested, by Weisser and others, that this is a Dirty Dozen type scenario … well it isn’t really the main premise of the film. Besides being only 3 of them (and therefore not party to the same sort of large group dynamics), and although they do get their release, this film becomes more of a buddy movie, better than - but along the lines of - The Implacable Three. A recent criticism of this particular implacable 3 labeled them “barely interesting leading characters”. I suppose a greater actor than Pietro Tordi could be envisaged in the role of the burly Mexican Paco, and obviously Sir Fernando Sancho comes to mind here. (Pietro Tordi/Peter White is otherwise known as Franco Cobianchi - Garrone's co-screenplay writer on this.) And as for the lothario Jerry, played by Craig Hill, could a better smoothie Casanova-type be found in Ivan Rassimov maybe … … or Steffen maybe to take over the reigns of Ken Wood’s Reno the bounty killer? Well no! I like these otherwise (excepting Hill) lesser-knowns getting the major roles – and imo they do equally admirable jobs in this, contrasting with, and complementing each other. This film does not suffer, (or maybe others think it does), from an interplay of expected stereotypes that these other well known faces would provoke. This made the film a breath of fresh air for this particular spaghetti-head - and in that I found some of its charm.

It has also been suggested that the camera work was poor. But, again I think not. There is both some subtly clever and some astonishing work here that does not however get in the way of the content. 2 pieces in particular illustrate this. Firstly, there is a scene where we see our protagonists in the background riding (apparently) towards a model gallows that is played by one of the Fletcher’s henchmen in the foreground - as if it is a metaphor for their destiny – or for the fate of Ortega’s boy. Secondly there is some creative, somewhat wacky dizziness when Paco is in a frenzy of shooting/being shot. The good camerawork complements the creative and considered cutting between scenes. Thought has gone into this, it is not just hacked together. When Jerry is charming his way, hopefully for him, into top sultry-bird Evelyn Stewart’s fruit basket (we see her fondling her oranges), and mentions a “Delores” – who could be the key to saving the aforementioned young ‘un from a bit of rope-burn, she says … “Maybe the guilt of that boy could be just the bad luck to have been born a Mexican – like me.” Jerry replies, obviously with his mind on matters that are more concerned with making love than taking life … “Funny, I’m thinking just how fortunate I am to meet a Mexican…” …and we cut to Paco in the bar being confronted by a gang of the townsfolk who have a somewhat different perspective on matters of racial integration. So now we even get the obligatory barroom brawl as well – you just knew it!

The film has pretty much everything in my book. Good villains; a layered story; good jokes that remain tongue in cheek and never cross over into farce – more in the spirit of the hat-shooting in FAFDM than anything more tacky. Theres the odd in-genre references … when our guys have silently infiltrated the Fletchers ranch, Paco opens the biggest musical box ever, gets away with it only to pour himself a drink and knock the glass over …. which provokes one of the… many unconciously choreographed shootouts. Plus there’s colorful supporting roles – Mulligan as the upright citizen, and a disapproving priest with a notebook, the redhaired mountainman henchman with the toy gallows, and an ultra sleezy bad bastard called Rod - all delightfully spaghetti in character; and there’s also some wonderful dialogue – but only when it’s needed. The music is perfunctory rather than perfect. It has trumpet trills as needed, and a marvelously quirky bit of wonky lift-music when Jerry is swapping knowing glances with his lurve interest, but overall it does not inspire and lift as other soundtracks of the genre have done to lesser films. This is my only minor gripe with an otherwise near perfect bit of spaghetti. It did, however, deserve better imo in respect of this.

And, what of the smoldering sultry beauty that has been barely hinted at, is she well rounded enough (I’m talking characterization here) for Brother Romaine? Oh yes! Evelyn Stewart does not disappoint in this respect. I’ll even forgive her for not taking her clothes of on camera (ok I don’t ). But she is beautiful and she’s got a great role as the femme fatale lover of a bad guy, a good guy, and of smoothie Craig as well. She gets some really good lines as well (for a spaghetti western gal – everything is relative here of course) and she gets to flash some highly charged meaningful glances, backed up by smoldering stares and some contemplative ponderings on the meaning of it all as her fate is mappaed out in the flickering flames of the metaphorical fire . Her character, and her acting - which nearly had me crying into my cider at one point - are other aspects of what makes this film so good for me. There’s some quirky dialogue between Paco and Jerry before the latter goes off to try and find out who the mysterious Delores really is … and, as his vocation, what might be the colour of her undergarments perchance … “If you’re right you could find yourself up against a wolf.” “A she-wolf you mean – and what a wolf!” And as Jerry leaves Paco quips “With an ugly toad she’ll not turn into a sleeping beauty!”

For all of the above reasons - and for the reason that I could never be sure who was gonna live and who would die in this - our protagonists; coma-girl; sultry bad-girl with a heart of gold; even that fellah at the beginning who was gonna hang; who would be there for the final credits? And you know by now that I like my spaghetti westerns dark and nihilistic. Anyway, I remained intrigued ‘til the somewhat corny but ultimately cool and perfect end. I even let out a cheer and punched the air. Hoorah!! said I, as it finished (but for different reasons to Brother ION BRITTON), and as I’ve also just repeated saying at finishing this marathon …