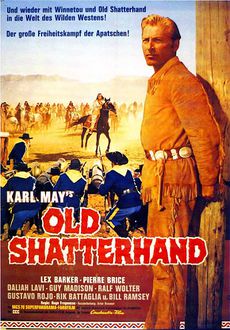 After the phenomenal success of Treasure at Silver Lake and Winnetou I, produced by Horst Wendlandt for Rialto Film, other companies wanted to have a slice of the very big cake. Such a company was Arthur Brauner's CCC. Wendlandt and Artur Brauner were old rivals. Wendlandt had actually worked for Brauner and CCC, but had changed to Rialto in 1961. Brauner was allowed to make a Winnetou movie, on condition that he’d come up with an original screenplay, since Wendlandt had bought the rights to all existing Winnetou novels. Brauner then asked one of his regular screenwriters, Hungarian ex-patriot Ladislas Fodor for a script. Fodor came up with a very bizarre story, in which: a) Winnetou suddenly had an adopted son; b) an 11 year old kid was killed by one of the heroes; c) a halfbreed squaw appeared naked .

A gang of white bandits and alcoholic Comanches is terrorizing the region, framing the peaceful Apaches for the crimes. While Winnetou is trying to calm down his own warriors, Old Shatterhand is trying to prove that the Apaches are innocent. His key witness is the boy, but during a supposed trick shoot, one of the bad guys shoots him and makes it look like an accident from the trick, to silence the witness. Shatterhand's work is further obstructed by a racist army officer, whose family was slaughtered by Indians, and Winnetou’s adopted son, who won’t listen to any reason … 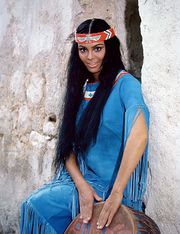 The opening scene, the boy witnissing the slaughter of his family, is strong, the rest of the movie is only so-so. It was largely shot in the magnificent Plitvice Lakes National Park, where several key scenes of Winnetou movies were shot, and the location work is impressive. The script, on the other hand, is both predictable and messy. On the positive side there’s a good performance by Guy Madison as the racist officer. He actually has a double role in the movie. Madison was a very good archer and was therefore asked to impersonate an Indian during a shooting contest. You’ll agree he would have been a good Robin Hood. Israeli beauty Daliah Lavi is also an asset, albeit for completely different reasons. Her much discussed nudity scene was filmed from a deceptively great distance.

The film was directed by Argentine director Hugo Fregonese, who had made one Argentine western, Pampa salvaje, and co-directed (with Giuliano Carmineo) one spaghetti western, Find a place to die. He had also spent some time in the US and directed a few Hollywood B-westerns in the fifties. His direction is more in line with Hollywood cavalry westerns than the Winnetou movies. Ironically the Old Shatterhand character is closer to Karl May’s original creation than in the other movies. May saw his Shatterhand as a missionary with an iron fist and a rifle (he hardly ever used, at least not to shoot at people), but in the movies he had become a more energetic, less preachy action hero. In Old Shatterhand, he is presented as a true peacemaker, a prophet who tries to realize his personal dream of a brotherhood of men, red, white or blue (army blue). Riz Ortolani’s music is also more Hollywood than Cinécittà; it’s a rather robust, heroic score, a bit similar to Elmer Bernstein’s score for The Magnificent Seven.

Old Shatterhand is a middling effort. Some scenes, like the nudity scene and a handful of crude action moments seem to indicate that the movie was aimed at a more adult audience. Loyal fans of the Winnetou movies were shocked by the killing of the child and a scene in which numerous Apaches are killed when assaulting the army fort.