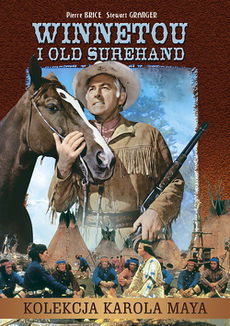 Despite the addition 1. Teil (first part) in the original German title, Old Surehand was the third movie to feature British actor Stewart Granger as Old Surehand. It was also the first Karl May movie that was not awarded a Goldene Leinwand for attracting more than 3 million people to theatres in Germany within 12 months. Granger and Brice, who had never liked each other, were on the worst imaginable terms by now and Granger felt so ashamed about the movie, that he apologized for it to his British and American colleagues. Ironically, this is by far the best of the three Surehand movies and also one of the best movies of the series.

Like in the previous adventures, Granger's Old Surehand has little in common with the tormented soul created by Karl May. But Granger has grown nicely into the part and lends the character a bit more dignity and gravitas here, even if he still wears Sunday trousers under buckskin and is still such a fabulous shot that he can shoot his opponents over hundreds of meters with his Winchester. No big deal? But he does so without aiming, and shooting from the hip. The script is not based on an existing Karl May novel, but nevertheless tells an over-familiar story. Bandits commanded by a villain called 'The General' rob a train and try to put the blame on the Indians, in this case the Comanches. When the son of the Comanche chief is killed in town by a sniper, only Old Surehand and Winnetou are able to prevent a war between the tribe and the town's people. We've seen those things many times before, but the film is seasoned with a dose of quite potent violence, and a second storyline has Granger as an avenger, a man looking for the murderer of his brother. Of course the murderer is... well, see for yourself.

The two previous Surehand movies had been small affairs. They lacked the large scale pretensions as well as the picturesque beauty of the movies featuring Old Shatterhand. For Old Surehand, director Alfred Vohrer clearly had a fairly high budget at his disposal and uses the Croatian landscape to much better effect, resulting in a few large scale action scenes that work pretty well and some of the best location work of the entire series, especially during the grand finale, set among the characteristic white rocks of Tulove Grede (used in Winnetou I to represent ‘Nugget Tsil’, the place where Winnetou’s father and sister were killed). For the train robbery scene an existing railway track between the cities of Berkovic and Zeveco, leading through a narrow canyon, was used. When a train of the Yugoslavion Railroad was approaching, the old steam train was quickly moved to a side track. The scenes in the General’s ‘Labyrinth of Death’ were not shot in the famous Postojna Grotto complex (used for Winnetou II), but in the smaller grotto complex of Zupanova Jama (Slovenaia).

Winnetou and Old Surehand have preciously little screen time together (for obvious reasons) and Larry Pennell is a rather bland villain, but Terence Hill's part as the stubborn young Toby, afraid of nothing, is particularly well written. His fiancée Judith is played by voluptuous blonde Letícia Román, an Italian actress - born as Letizia Novarese (1) - who had played the titular heroin in Russ Meyer's Fanny Hill (1964), and thereupon become a notorious starlet of German and Italian productions of dubious contents. She adds a welcome touch of eroticism to the movie, along with voluptuous brunette Jelena Jovanovich, another starlet of the same genre. Look quickly for Wolfgang Lukschy, Mr. Baxter from Fistful of Dollars, he plays the judge here. The script often defies logic and of course the film is also marred by the same silliness and often ridiculous comic relief as most other films in the series, but the script is so tight, and the pace so high, that it seems less detrimental here.

With lots of innocent people shot and two sex-pots in the cast this is one of the more adult oriented Karl May adaptations. It's not a great movie by any stretch of the imagination, but it's good fun, and warmly recommended to fans of the series. 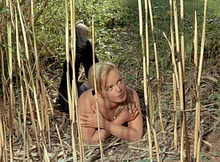