Once Upon A Time in Italy: The Westerns of Sergio Leone book review

Review of Once Upon A Time in Italy: The Westerns of Sergio Leone by Christopher Frayling; 2005, Harry N. Abrams, Inc. 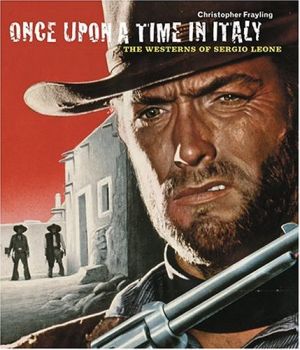 Fans of the genre, in particular fans of Sergio Leone should be quite familiar with Sir Christopher Frayling. He's had a tremendous amount of impact on the preservation as well as acceptance of the spaghetti western. The Professor of Cultural History has written other books on the genre, such as Spaghetti Westerns: Cowboys and Europeans from Karl May to Sergio Leone, and the exceptional Leone biography, Something to Do With Death. He's also assisted in the fantastic Leone DVD rereleases, providing commentary and documentary material.

Frayling knows his stuff. And once again, he's delivered another fantastic book on the genre, the coffee-table book, Once Upon A Time in Italy: The Westerns of Sergio Leone. This is a visually striking tome that covers all of the Leone westerns, and it is meticulously researched, and has many images that you probably have never seen before. Frayling was fortunate enough to have access to a wealth of private collections from various sources, and so there's literally tons of old promotional materials, film stills, posters, costume and set designs and many other things.

But it's hardly a just a book of nice pictures. The first section of the book gives some biographical background on Leone, then there are in-depth chapters on each of Leone's films, with historical backgrounds, thematic analyses, and much more. There's even a bit on where Leone cited American westerns in his films, whether it be small symbolic gestures, actors, or variations on dialogue.

The next section covers interviews, and what a treasure it is. There are interviews with Leone himself, Clint Eastwood, Lee Van Cleef, Eli Wallach, Set designer Carlo Simi, writer Sergio Donati, and several other people involved in Leone's films (as well as an afterword with Martin Scorsese). The interviews are chock full of great insights form the pivotal people in his films For example, Van Cleef on acting with Italian scripts:

"The one area I disagreed with in the Italian scripts was the dialogue. There was too much of it. I'd be given a goddamn half-page paragraph and say, "Look, I can get this across in two words." Maybe it's a difference in the languages, but I had to rewrite every damn scene I was in. I reduced the whole thing - cut it down to a "Hello" or a "Pardon me, ma'am." A lot of actors think that the more words they have, the more attention they get. That's bullshit. I make people look at me . I don't have to say a lot of words."

The last section of the book contains a loving tribute that Leone wrote to director John Ford, a chapter on "the Leone Legacy", the Scorsese afterword, a "Leone in America" scrapbook full of old clippings and such, and finally a filmography.

I left this one out on my coffee table (hey, it is a coffee-table book, right?), and without fail, whenever we'd have visitors over, whether it would be a party or whatever, the book was always a conversation starter. Living in a rather rural part of the United States, there's not too many people that even know what a spaghetti western is, and if they do, it's only about the Leone films. When I tell them there were about 500 films, they find it hard to believe. So this book is a great addition to any coffee table, and if you're a Leone fan, it's a really special treat.