One More to Hell Review

Johnny King, a drifting gunslinger, falls in with a gang of outlaws after becoming acquainted with their leader during a stay in jail. After a robbery, Johnny goes back to his friend's ranch house to find him and his family murdered by the Ward brothers. Johnny of course, swears vengeance. Needless to say, he causes a lot of trouble for the Wards. It is not long after, that Johnny's outlaw friends come to town. Told only to kill some nameless man who seems to be irritating the Wards. But the outlaws at first don't know who.

Fago's foray into the Western genre lasted only for three films. Though only two can be remembered by name. I myself only discovered this film some months ago even after years of obsession with Spaghettis. It is rather obscure. But unjustly so as it not only stars George Hilton, one of the genre's most beloved stars, but also evil incarnate, Gerard Herter, whose villainous appearance graced many a Spaghetti. (Though not too many).

This film is about as good as Fago's Vengeance is Mine and O' Cangaceiro. Though more similar to Vengeance is Mine. It shares not many similarities. But there are actually few Spaghettis that share similarities with this film. As it is pretty strange in the way it is structured. The first half of the film is a full on Comedy Spaghetti with fist fights, goofy antics, and all around smart assery (it is a George Hilton film after all). But after Johnny returns home, the film, rather abruptly, becomes a dark and violent revenge film with absolutely none of the Comedy seen previous. It becomes apparent that the first half, is seemingly a very long introduction to the characters and their relationship. It seems a bit much but after viewing, it really helps the film. A lot of the hybrid Comedy/Serious spaghettis get a bad rap for their conflicting tones. But for here, it works for the film. The massacre of the friends and the sudden halt in anything lighthearted only goes to show what an ugly business these characters deal in and how dark murder is in general. Though I doubt those were the intentions. In any case, it does a good job at meshing two tones to work with each other rather than against.

Another well done aspect of the film is the inclusion of friends. Johnny King is shown to be a man who is somewhat easy to get along with. Not the tight lipped, sunburnt, squinting asshole that most heroes are in these films. But a lighter character who actually has friends! A cliche of the genre is the lack of any friends for the anti-hero. Example: Johnny Haliday, The Specialist, "I have no friends." But King has friends. Usually in the genre, friends are actually the hero's worst enemies as they either betray them or trick them into thinking they're friends to lure them into danger. This cliche is toyed around with in the film as whether the friends will betray Johnny or not. Creating some kind of suspense. Will we like this character in the end or not? Suspenseful. but also more human. 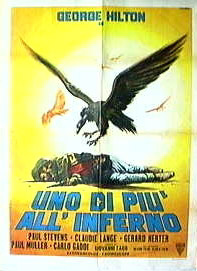 Hilton puts on another great show. Tottering between smart assed comedian and cold ass killer. Pulling both off convincingly as well as the transition. Paolo Gozlino, a character actor, is given a much larger part than in other films. And with his unkept beard, he actually looks Western. He's good here too as a man who must decide between money or friendship while also balancing between friendly bandit or ruthless outlaw. And of course we have Gerard Herter again with his trademark Teutonic haircut and monocle. The most menacing features of any villain. If the guy's wearing a monocle, kill that bastard!

Fago's direction is very sound and things go smoothly. He doesn't film a whole lot of action. Preferring to film well filmed set piece action that can be very suspenseful and atmospheric. His comedic side is nothing out of the norm and his ideas show some brilliance, the likes the Three stooges had (Hilton's foot is bitten by Gozlino when the two share a jail cell bunk, head to toe). My only complaint is that the seeds of the main friendship seem a little odd. Who knew that the way you become best friends with someone is to beat each other to a pulp. On a side-note, I noticed Fago's fixation with the coast is present here as well. Vengeance is Mine and O' Cangaicero both have a lot of coastal filming.

Fidenco's score isn't memorable nor is it bad. The one tune that stays in my head is the wonderful guitars of the opening scene.

If you can find it (or are willing to pay Global's outlandish price) get it. There is not much to dislike. Nothin' in it seems bad at all. It's not boring and it has a wonderful title. One only the Italians would think of. One More to Hell. Wonderful. --Korano 03:01, 19 October 2009 (UTC)