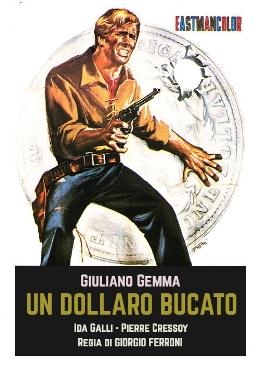 The first of three westerns directed by Giorgio Ferroni in which Giuliano Gemma plays a character called Gary. If not the best, then cerainly the most trend-setting, starting a sub genre referred to as the Ulysses type of spaghetti westerns about a war veteran coming home and experiencing diffulties to pick up his old life
__________

When the Civil War is over, Confederate officers Gary and Phil O'Hara are released from a POW camp. Gary returns home to his wife Judy while Phil heads off West. But Gary soon finds out that it's very hard to settle down and make a living in the post-war society, especially for a southerner, so he follows his brother to a town called Yellowstone in order to find work. He is soon hired by local banker McCorey, who offers him a ranch and some money in exchange for a 'dirty job': Gary must bring in a local bandit called Blacky, who has interfered with McCorey's affairs. Too late Gary recognizes his brother and when Phil pulls his gun, McCorey's men immediately open fire. Both brothers are left for dead, but Gary's life has been saved by a silver dollar he had in his breast pocket ...

Along with Duccio Tessari's The Return of Ringo (also with Giuliano Gemma), Un dollaro bucato set the tone for the sub-genre of the so-called Ulysses type (the protagonist is a man coming home from the war, like Ulysses from Homer's Odessey). Usually set in the aftermath of the Civil War, the films are concerned with the trouble war veterans meet when trying to pick up their lives (*1). Most of the time the protagonist is a southerner, defeated but unbroken, who must fight for his land and family. With World War II and Mussolini still in mind, most Italian moviegoers had little trouble to identify with this kind of 'tormented hero'. World War II and its aftermath, were to Italy what The Vietnam war and Watergate were to the US: traumatic affairs that needed to be straightened out. Clint Eastwood’s ‘social western’ The Outlaw Josey Wales (1976) comes closest (in spirit) to these type of westerns: it also uses the Civil War to talk about the problems to build up a new life in a post-war society, and reflects, like One Silver Dollar, the condition of a country in search of a new identity.

In One Silver Dollar the feelings of defeat and humiliation, strongly felt by the common Italian, are symbolized by the sawn-off barrel of the pistol handed over to Gemma when he's released from the POW camp. The scene is echoed in the film's final moments, when this 'emasculated gun' is passed to Cressoy, who's unable to shoot Gemma with it, symbolizing not only Gemma's victory over the forces of evil, but also the regained fertility of the post-war society. Note that it's not Gary O’Hara who finally settles the scores with the corrupt banker, but that this is done by the townspeople. Gary’s development, his integration into the new society and his regained dignity, is reflected in his presence in the course of the movie. He’s first seen as a heavily bearded man, bearing his saddle over his shoulder, and only later he becomes the clean-shaven, proud and good-looking young man he’s identified with as an actor.

Unlike most of his colleagues, Giorgio Ferroni (1908-1981) had reached middle age when the spaghetti craze broke out. He was brought up with Hollywood westerns and his style is often closer to Hollywood than to Leone. Some scenes, such as the fatal confrontation of the two brothers, aren't very believable (they would've recognized each other immediately) and the romantic scenes are a bit schmaltzy, but nearly every opportunity is taken to create a showcase for the physical abilities of former stuntman Gemma, resulting in a series of excellently staged fistfights and sudden shoot outs. The idea of the life-saving dollar, is taking from medieval tales of chivalry. Knights departing for the crusades, often wore a token around their neck, a personal gift from their ‘lady’, that saved their life at a crucial moment in the narrative. It feels a little odd in the context of the western, but it’s well-integrated into the story (*2). Gianni Ferrio's score is lovely, the whistled motto, played over the nice Rotoscope title sequence, a standout. The film was made within 32 days, on a reduced budget, but was immensely successful, even beating the two Ringo movies at the box-office (*3), ending second after Sergio Leone's For a Few Dollars More on the list of most successful Italian westerns of 1965 (*4). Reportedly it was one of the favourite films of famous Italian writer Alberto Moravia 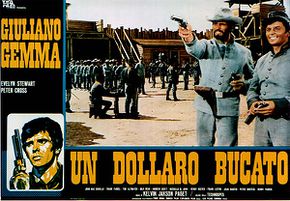 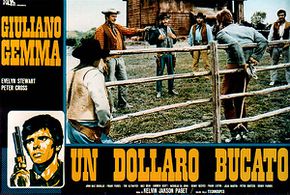 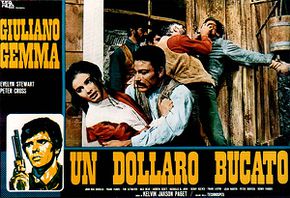 Simon Gelten is a long time contributor to the SWDb. "I'm not as old as Tom B. but I'm working on it. I hope to catch up with him by the end of the next decade.", he says. Simon saw all movies by Sergio Leone and several by Sergio Corbucci in cinema, most of the time in Eindhoven, the city where he was born. Currently, Simon is living in Turnhout, Belgium. Simon is active within the database as both Scherpschutter and his alter ego Tiratore Scelto.
Retrieved from "https://www.spaghetti-western.net/index.php?title=One_Silver_Dollar_review&oldid=116097"