One by One... Without Mercy Review

Peter Lee Lawrence (well-dressed and shiny as ever) is young Mr. Grayson, the son of a Confederate Colonel who - according to some persistent rumors - has embezzled a large sum of money during the Civil War. He is told, by a former Mexican army scout called Charro, that the Colonel was betrayed by some of his lieutenants. Grayson Jr. and Chaco set out to clear the old man’s name and track down the traitors to punish them ... one by one, without mercy ... But who is this Charro and can he be trusted?

One by One is a small spaghetti western of the serio-comic kind. There are some similarities to director Marchent’s better known And Sartana Killed Them All, also starring Spoletini/Bogart. The film is a bit of a hodge podge, a mix of styles and influences. The first half is a revenge tale, but filmed in the style of a caper movie, with Peter Lee and Spoletini playing an unlikely pair of buddies. Things get a bit more serious in the second half, with Eduardo Fajardo as a former traitor, now a respected member of society, who uses his authority to organize a manhunt. The score is eventually settled at a farm where Chico (as he is baptized by Charro) also has a brief romance with the farmer’s daughter. But that’s not the end of the movie: there’s a coda in the style of a Sartana movie, with the ‘hero’ appearing out of the blue - in the middle of the desert - that puts the entire story upside down.

Basically this is a Spanish production with some Italian logistic and financial support (plus of course Spoletini), but the style is very Leonesque, with odd angles and intense close-ups. The location work is quite nice; those scenes shot in an autumnal forest (during the manhunt) look particularly fine. The score by Vasco & Mancuso is forgettable and the actors are their usual self. If you like Lawrence, you’ll like him in this movie, if you like Spoletini, you’ll love him: he does his utmost best to act as noisy and hectic as these comical side-kicks were supposed to be in these type of movies. Violence, comedy, romance, you name it, this movie has it all. There’s also a stagecoach robbery and (of course) a barroom brawl. There are a few lame jokes such as Peter Lee riding a pony instead of a horse. The first half is more light-hearted than the second, but it's also better paced. Most copies have a running-time of a mere 81 minutes, which means nine or ten minutes are missing. The cuts might have hurt the flow of the narrative, but it looks like a patchwork movie anyway, a handful of ideas thrown together. Not surprisingly it works better in parts than as a whole. It doesn’t really hang together, but if you can forget its inconsistencies, it’s mildly entertaining. 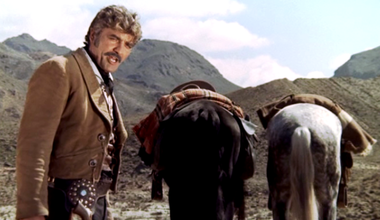 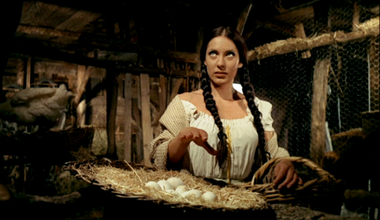 Peter Lee Lawrence is a young man who wants to clear his father’s name. He is helped (or thwarted?) by a Mexican who used to work for the old man. A mildly entertaining hodgepodge of a movie, offering a mix of comedy and violence