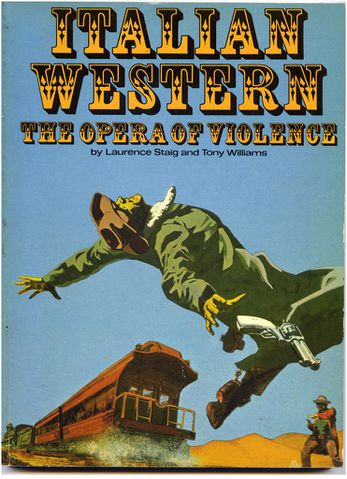 Availability: Out of print.

Buy now: From Amazon.com (out of print) | Amazon.co.uk

Description: "One of the first books written on the subject and one of the best. A terrific read without over-analysing the genre" - Fistfulofwesterns.com

With 112 pages of black and white photos, and only 58 of text, you could easily think to dismiss this book. But, being published in 1975 (in Great Britain), and despite having a chapter called 'Aftermath' which talks of the genre directors moving on, we know in hindsight that the genre was not quite yet finished. This makes it a rare book, as contemporaneous with the genre as we are going to get.

As with the title, it is written in two parts – Part 1 (5 chapters) deals primarily with context, history and themes, including chapters dedicated to 'The Ecstasy of Violence', 'Sergio Leone', and to 'The Political Western', and Part 2 (8 chapters) deals extensively with the integration of the music – with chapters such as 'You can be damn sure it's not Percy Faith' and 'When the chimes end... pick up your gun'. More than 50 genre films get a mention, but in such a small amount of text, some are relegated to just a passing sentence. The Leone's (of course) and 'My Name Is Nobody' (which seems to be a favourite of the authors), and others, get much more. This is a book built on personal opinion, and therefore we may not agree that 'Dead or Alive'(we'd know it as 'A Minute to Pray, A Second To Die') should get so rudely dismissed in a sentence, or that the first two Stranger films are “grotesque imitations”, but for all that, this still makes for a refreshing read. That the authors wrote this when 'Django' was banned here (Britain), 'The Big Gundown' was “savagely mutilated by cuts”, as was 'A Bullet for the General', and 'The Grand Silence' was still unreleased, makes this even more interesting from an historical perspective. It is also fun to spot the alternate names, 'Vengeance is Mine' is what we would more likely call 'A Bullet for Sandoval', for instance. This is a very readable and not overly academic book, that is particularly interesting for its unique discussion of the integration of music and visuals in the Italian Western... as “the opera of violence”.