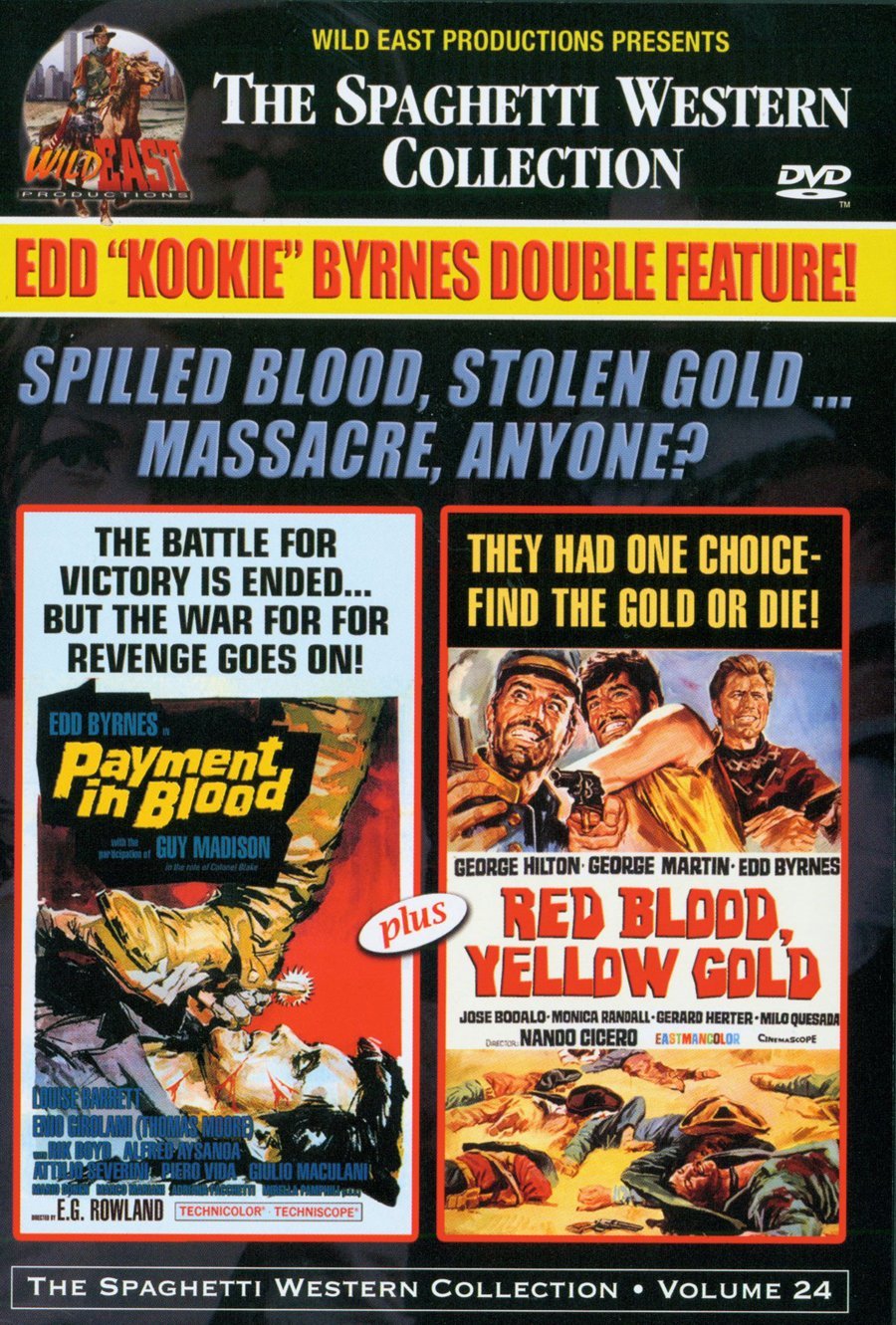 Story - Former confederate Colonel Blake (Guy Madison) and his marauders are causing terror among the recently defeated southern states. His gang pillages, rapes and ravages through the hills and cities, high bounties awaiting for whoever manages to put his reign of terror to an end. As he sends Chamaco (Ennio Girolami) to a hacienda trying to find out about the whereabouts of General Beauregard's treasure, a well-kept secret among former confederate brass, he gets caught and sentenced to death by firing squad. He's rescued from certain death by a young gringo named Stuart (Ed Byrnes), who claims interest in the marauders' cause and is then taken in by Chamaco and the two ride into the hills to Colonel Blake's secret camp. The youngster manages to join up with them as he claims he knows the whereabouts of that treasure. The whole gang sets out execute a plan. They would infiltrate the city of Durango, where the treasure is supposedly hidden, and lure the Sheriff's posse away. Yet Stuart has a better plan... one he cleverly executes despite Blake's sharp criminal mind....

Review - Blake's Marauders, the more fitting title for this film, is an interesting little gem. I'd seen this one before on German TV months ago and didn't find it particularly exciting. In fact, it took me two attempts to watch this one, but that was due to outside influences as well. But while we're at it, here's the downside: The movie's visuals are mostly sub-standard. We get the low-budged green grass and suspiciously modern looking countryside and infrastructure, mixed with only scarce shots of genuine Almeria or similarly dusty landscapes. The editing is not very inspired, at times the movie appears rather uninspired and loosely put together. The action is unbalanced and as a whole, the movie is a mixture of really interesting and well-made moments and rather forgettable and campy looking parts. But on the good side, the movie offers and excellent score by de Masi, which although constantly repeated over and over again, manages to not lose its effect and keeps up both the light hearted, slightly American feel of the movie and the - even though unsuccessful - ambitions of the director in terms of epicness. Add to that a charming lead, who's sort of made to look like a mix between Clint Eastwood and Lex Barker, a relatively bland but scary villain and a charming and sexy sidekick girl who unfortunately doesn't get to throw her weight around in terms of how central her character is actually. What ties the movie together, but gets clear only towards the end, is the actually pretty smart script/story for this little flick, which leaves a lot of wasted potential but, honestly, I think it saved the movie from failure. All in all I can say that it's a decent film, that has its moments and is overall entertaining, despite the flaws in the directing department (Castellari, you could've done better!) and the visuals.

DVD - Both movies are on one disc, just to get that out first. This film is presented in actually magnificent looking cinemascope widescreen, with great colors and basically scratch-free transfer. There are a few occasions where the quality drops a bit, I assume it's due to different source material used. The picture lacks some sharpness but I think that's more or less it. It's one of the best transfers I've seen from Wild East. There are a few moments where no English audio is available. These scenes are presented in French with English subtitles. The audio is similarly in excellent shape and sounded quite dynamic and free of nuisance. All in all a great presentation by Wild East.

Story - A bunch of southern bandits (Hilton, Byrnes and Martin) get caught ripping off their own people and coning their way through the country, no sign of patriotism. They are court-martialed by the confederates and sentenced to death. Yet a General saves the sons of bitches from the firing squad. The General had entrusted Major Lloyd (Gerard Herter, the creepy Austrian from The Big Gundown) to purchase arms with stolen gold. Yet the Major disappeared with his accomplices. Since that arms business was supposed to stay secret, the General sends out the three jail birds to catch Lloyd and bring back the money, in exchange for clemency. They have to take his Lieutenant with him, who the General suspects to be a northern spy anyway. They are able to track down the Major quickly, but to get the gold back turns out to be more difficult, as a gang of transvestite Mexicans shows up and snatches it, so they have to conquer it back first. Obviously many a man loses his life in the process and the truth about the alleged spy comes out as well. And as we all know, in the end the gold doesn't end up in the hands of those it belongs to, anyhow.

Review - Basically, it's a relatively boring movie, which is a shame. The story is fairly original and the plot twists and turns are exciting, but the script is full of holes, the characters are not very plastic and the music is worse than in one of those comedy westerns. What's outstanding, is the cinematography. Whoever is responsible for that, deserves a pad on the back, because in the end the picture of this movie is the only thing really professionally made in this flick. Granted, the shoot outs aren't too bad and there are plenty explosions and stuff to go around with. All in all an average caper, at times really brutal, but mostly very light-hearted and quite bizarre even at times (head of the family both mum and dad??). But maybe I'm just being too harsh on this one, the dubbing is quite good and if your expectations aren't too high, then you might get a fun time outa this one. One reason I didn't like this as much also was the german dubbing I had previously seen, this one is way better, also the title song etc.

DVD - I've seen this on the German DVD before, which has an excellent video transfer. Wild East's looks alright, but doesn't quite convince as much. The transfer is colorful, acceptably free of major damages and offers decent contrast, yet is a bit grainy and at times not very sharp. Overall though, it's a quite good transfer, a very good one for Wild East even, and doesn't really leave room for complaint.

Kookie Italiano! is a 20min interview with Ed Byrnes at his home in California. It is a very entertaining interview with nice stories from his time in Italy and Spain and quite a few nice anecdotes and information on the movies he made in Europe. Ed seems to be a really nice fella. I liked this interview a lot! Then there's a Payment in Blood picture gallery with music that runs for about 2 and a half minutes with posters and artwork and stuff. The same for the other movie, with a little less than two minutes. To finish it up, there's a trailer for each of the two films.

This double feature is definitely one for the completists, but then again, that's not true. Granted, the two movies are not ideal for someone like myself who likes the gritty, dusty, sinister movies more than the light-hearted ones, but they nevertheless are decent entries in the genre. Wild East laudably presents these two movies in good quality with some really nice extras. I'd say the whole package is absolutely worth getting, notwithstanding the fact that one or both of the movies might not be for everyone, but the whole presentation is a worthy purchase for the fan.

This DVD was provided by Wild East.

Retrieved from "https://www.spaghetti-western.net/index.php?title=Payment_in_Blood_%26_Red_Blood_Yellow_Gold_DVD_review&oldid=45517"
Categories:
Cookies help us deliver our services. By using our services, you agree to our use of cookies.