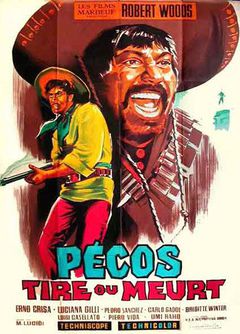 A quick sequel to My Name is Pecos, that had done surprisingly well. Although Robert Woods plays the same character, the Mexican gunslinger Pecos - tall on his feet, quick on the draw - the sequel is different in atmosphere and tone. The first movie had been violent and dramatic, essentially a revenge movie, the second is a more light-hearted treasure hunt movie with tongue-in-cheek humor (but with some badass action as well).

The film opens with three mariachis witnessing a group of bandits attacking a farm. Apparently the bandits are looking for something. An older man is tortured but refuses to give away his secrets and is finally left for dead among the smoking ruins of his house. He is mortally wounded, but lives long enough to tell the three musicians what the bandits were after: a treasure map which would lead them to the long-lost treasure of Montezuma. He also tells them where the map is hidden: in a pigeon-house. The map tells them that the treasure is hidden on a mountain, in the very temple that is inhabited by a man known as El Supremo, who thinks he’s a far descendant of Montezuma himself. The three amigos are greedy enough to crave for the gold, but smart enough to go looking for help. And then they meet Pecos, the tallest and fastest of all Mexicans …

With the mariachis commenting the action as well as each other, often in funny style, the film breathes a gentle, relaxed atmosphere, but it’s not really a comedy. Like director Lucidi’s The Greatest Robbery in the West it mixes lighthearted scenes with real spaghetti western violence. Woods makes quite a lot of kills, and even presents a new shooting style: without drawing your gun, but lifting your holster instead. In the finale he shoots several opponents while hanging in a chair, a trick he would repeat in the legendary El Puro. The first Pecos movie had nicely reversed the spaghetti western cliché of the good American ‘gringo’ and the Mexican villains. It had turned the good gringo into a Mexican rolling up a gang of white scum on American soil. The sequel isn’t completely free of white trash, but it’s set in Mexico and the main villain is a Mexican, a revolutionary of dubious nature. He thinks he’s a direct descendant of Montezuma, but living in a temple and wearing a Dracula cape, he’s probably dreaming of a reign of darkness. To underline his ambitions (and to finance his activities) he has kidnapped the governor’s daughter. Pecos has no doubt about the man’s nature and intentions: “If the devil would go looking for a partner in Mexico, his choice would be El Supremo,” says he.

Most reactions to Pecos Cleans Up were lukewarm. Woods himself thought it wasn’t a good idea to create a different atmosphere when making a sequel (1). For this reason I had low expectations but I was pleasantly surprised. The script is very lively, occasionally even clever. With Pecos infiltrating the gang, picking the villains one by one, using their personal weaknesses (related to the deadly sins), there are a few similarities to Merino’s better known Requiem for a Gringo, made one year later. According to some people, Merino’s movie was inspired by Kobayashi’s Seppuko (Harakiri), so maybe the similarities are due to a common source of inspiration. After all, many spaghetti western directors and writers were fans of Samurai movies. Another similarity is the presence of Carlo Gaddi in a similar role of a gunman obsessed by a woman who despises him. In spite of all this, both films are completely different in tone.

Woods has grown nicely into the role of Pecos Martinez, the character who would become a hero in third world countries. When he took a holiday in Africa, years later, he was recognized as the actor who played Pecos and discovered that children (and even shops!) were named after the character (2). Luciana Gilli is nice eye candy and both Gaddi and the relatively unknown Barbacane are quite good as El Supremo’s henchmen. Crisa, as El Supremo, is not a great villain and the final duel between him and Woods (wrestlemania with a whip!) is a major letdown. Most actors playing Mexicans don’t look Mexican, but we’ve learned to live with that. What hurts the film more is the Italian landscape, which totally fails to evoke Mexico lingo. Lallo Gori’s score is a mixture of his own and other composer’s themes (I noticed some hints at Benedetto Ghiglia’s score for A Stranger in Town). It’s far from original, but it works well.

Retrieved from "https://www.spaghetti-western.net/index.php?title=Pecos_Cleans_Up_Review&oldid=96722"
Category:
Cookies help us deliver our services. By using our services, you agree to our use of cookies.