For several reasons this peplum movie is a must see for spaghetti western fans. It’s not only one of the best movies of its kind, but it was also directed by Sergio Corbucci, and it shows: it’s a kind of proto-Zapata, with a Roman centurion developing a revolutionary conscience and eventually commanding the slaves who stand up against their oppressor, Marcus Licinius Crassus, knicknamed Dives, the Rich One.

Muscle man Steve Reeves is Randus, a man of unknown descent serving Julius Caesar. He’s sent by his master to Africa, to keep an eye on Caesar’s rival Crassus, the wealthiest man of his time. Instead he falls into the hands of slave-drivers, working for the rich Roman. After a struggle for water with one of the other captives, he is recognized by this man as the son of the revolutionary hero Spartacus, who stood up against Rome twenty years ago.

Unlike most peplums, which were shot at Cinecittà Studios in Rome, this one was shot on location in Egypt, by no other than Enzo Barboni. The desert landscape, the dromedaries and North-African supporting actors give the film an unlaboured, natural look. The story is quite lively, but the development of the revolutionary conscience is rather abrupt. In Corbucci’s Zapata westerns, it is (to use a Marxist term) a dialectical process: a mercenary from the old world learns from a third world revolutionary while instructing him. In this case Randus is identified as the son of Spartacus through an amulet he’s wearing, and all of a sudden becomes aware of his historic mission.

There are also a lot of chronological problems. The story is set twenty years after the events that led to Spartacus death, so in 51 BC, and a son of Spartacus would have been a young man, not a man in his late thirties (like Reeves). Crassus is killed in the end, but in 51 BC he was long dead and buried. He had died two years before, not in North-Africa and not during a slave uprising, but while on an Asian campaign (1). It’s also suggested that he was Caesar’s last remaining rival for the supreme authority over the city of Rome after the death of Pompey (Pompeius). In reality Pompey survived Crassus, and Crassus’ death would lead to a civil war between two remaining members of the so-called triumvirate.

But that’s all of minor importance. Italian film makers working within the genre cinema hardly ever cared for historic accuracy. Nor for political correctness. Like Corbucci’s Zapata westerns this is a proletarian fable in which the heroes are on the left, and the bad guys are on the right. It also already shows – four years before Django – the director’s penchant for grim violence. There are a few quite nasty stabbings, a regiment of Roman soldiers is slaughtered in particularly brutal fashion and if you pay attention, you may even catch a glimpse of a decapitation, probably the first in these type of movies. It’s nice to see that Corbucci, two years before he was asked to help Albert Band with the direction of Massacre at Grand Canyon, was already developing a visual style that was closer to the western than the classic peplum or the Hollywood productions that often served as a model. Who wouldn’t think of Navajo Joe when watching this the second screenshot? And who wouldn’t think of his later excesses when watching the third?

Il Figlio di Spartacus is a very enjoyable peplum, as long as you don’t expect a masterpiece. I never was a fan of the genre: men in miniskirts beating the living daylights out of each other, simply isn't my idea of an exciting spectacle. Apart from Canale, who is quite convincing as Crassus’ bitchy wife, performances are mediocre at best. Reeves is only merely adequate as Randus. Giovanni Ciangriglia was his stunt double and had quite a lot to do. It would be Reeves' last peplum because of a painful shoulder injury. He had dislocated his shoulder three years before, on the set of Last Days of Pompei, and the injury eventually would make film making and weightlifting impossible.

Reviewed Version I watched the Dutch DVD, called "The Slave" - The Son of Spartacus, released by Green Cow. In spite of the English title, the DVD has only Italian audio. The only subtitle option is Dutch, so the DVD is not English friendly. Image quality is poor. It's in the wrong Aspect Ratio (1,85:1 instead of 2,35:1), there's a lot of film grain and colours have faded. There's often a rather persistent blue shimmering, as if there's some kind of veil hanging in front of the image.

Screenshots from the Dutch DVD 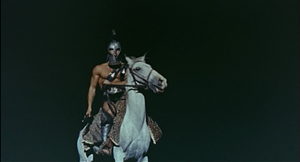 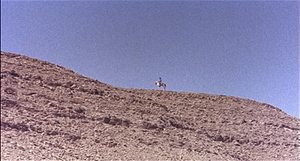 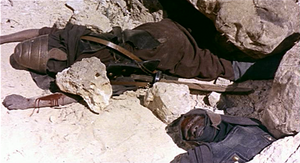