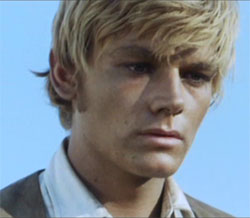 Peter Lee Lawrence born as Karl Hyrenbach.His debut was in 1965 in For a few Dollars more (uncredited) after this movie he played mostly heroes in Spaghetti-Western and in Italo-Spain-Produced Thrillers. He died from the effects of stomach problems in Villa Stuart Clinic in Rome, Italy. This information comes from his wife actress Cristina Galbo.