Pirates of the Mississippi Review 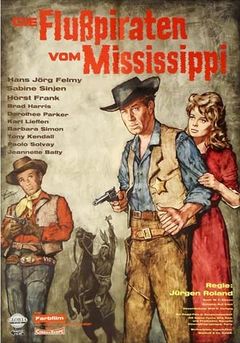 The first of three Sauerkraut westerns produced by Wolf C. Hartwig, all starring former peplum star Brad Harris and a young Horst Frank. The movie is part of a trilogy, the other two entries being Massacre at Marble City and Black Eagle of Santa Fe. Horst Frank is John Kelly, a disgraced Cavalry Colonel, now the leader of a gang called the River Pirates. With the help of the Cherokee tribe, Kelly wants to attack the river boat and the small town of Helena. Harris is an old acquaintance of the local sheriff (Felmy), who's falsely accused of being a member of the gang. He's saved from the gallows (in Blondie/Tuco style!) by his old pal and of course helps him to investigate the case.

This was one of the first Sauerkraut westerns, made in the wake of the first Karl May adaptation Treasure of Silver Lake (1962). The novel by German author Friedrich Gerstäcker had several subplots that kept the screenwriters more than busy. They changed a couple of details (in the book gang leader Kelly leads a double life as the local judge, in the movie they're two different characters) but the script remains a rather intricate one, with lots of characters and complications.

Felmy looks a bit too sophisticated for the role of a western hero, but luckily Horst Frank is cast as the villain this time around (in the other two entries he'd play a positive character). Kendall/Stella has always sustained that he was offered the role of No Name in A Fistful of Dollars; if so, Leone had probably seen him in this one. It was made prior to Fistful and when watching it, you'll notice quite a few scenes and plot devices that would pop up in Leone's famous movies (1). Even if these similarities are coincidental, the movie has some considerable historic value. Gianfranco Parolini directed the action scenes (the fight scenes were choreographed by Harris), who would reunite Harris and Kendall in the years to come in a series of spy movies. It's also the first appearance by Dan Vadis in a European western.

Like most Sauerkraut westerns Pirates is a corny affair, but it's quite lively, a bit plot-heavy maybe, but good fun when you're in the mood for these type of movies. Rolf Kästel's cinematography is impressive, but the film has a rather odd look, due to the vivid, occasionally even dazzling colors of the costumes. Frank later confessed that they had been used shortly before in the Munich Carnaval Parade (2). Ein Bier, bitte.

Although he produced a couple of westerns, Wolf C. Hartwig is probably best known to western fans as the producer of Sam Peckinpah's non-western movie Cross of Iron (in German: Steiner: Das Eizerne Kreuz).

Hartwig started producing movies in the fifties. He had worked as an interpreter at the German headquarters in Paris during the war and had owned (with his wife) a language school. In 1954 he founded Rapid Films. He produced a series of adventure movies, often set in Asia and offering a (for the period) a daring amount of eroticism and violence. Some of the actors he worked with on a regular base were Lex Barker, Horst Frank and Frederick Stafford. He wasn't lucky with the western genre; while the Winnetou movies made millions, he produced a few of his own but they weren't particularly successful.

Hartwig was a fan of war novels and had long been dreaming about a large-scale war movie, telling the Russian campaign from the German viewpoint. Cross of Iron was a very troubled production and it wasn't the international success he had hoped for, but the movie did very well in Germany itself.