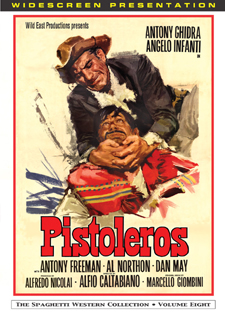 At first sight Pistoleros, the only spaghetti western directed by actor and master of arms Alfio Caltabiano, seems only a more violent but slightly tongue-in-cheek retelling of For a Few Dollars More. Two bounty hunters are on the track of a notorious bandit for different reasons, the younger of the two (Angelo Infante) is after the reward, the older one (Anthony Ghidra) has a personal score to settle. Furthermore several scenes from Leone’s masterpiece are copied, but usually with an added-on twist. So when the young man proposes a partnership, the older one refuses, but not for financial reasons, but because he despises bounty hunters. Despite this refusal Infante stays on Ghidra’s track and even saves his life at a few instances. Ghidra’s behaviour changes when he sees that Infante wears a hanger in the shape of a pistol. It’s also at this point that the complete mood of the film changes. Instead of tongue-in-cheek but violent it becomes more serious and even some religious elements start shining through. When Ghidra finally kills the man he has been chasing for years, he does so almost reluctantly, and when he has revealed his identity to Infante and explained his scorn for bounty hunters, the latter makes a decision that seems contradictory to all the genre stands for.

Pistoleros is one of the few spaghetti westerns that take a positive stance towards religion. In the theme song we’re asked not to weep for the dead, but for those who killed them, for they will remain lifeless forever. Like Corbucci in The Great Silence, Caltabiano seems to disapprove of Leone’s depiction of the bounty hunter in For a Few Dollars More. He makes clear that it was a dirty job, and that the ones who did it couldn’t keep their hands clean. He seems also to be questioning the way collateral damage - or violence in general - is depicted in spaghetti westerns: there’s one very powerful scene (easily the best of the film) in which Ghidra pays his respect to the dead when he witnesses a funeral ceremony held in the streets after a bloody bank robbery. All this makes Pistoleros, a film with a heart and a mind, a very interesting genre entry, but it’s not without flaws. The are a lot of jarring shifts in tone (from violent action to tongue-in-cheek humour and melodrama) and there’s one barroom brawl that is pure slapstick and completely out of sync with the rest of the movie.

The film is presented in its original aspect ratio of 2,35:1. It’s a fine anamorphic transfer, with good contrast rates and really vibrant colours. There are a few scratches and specks, and I spotted some (very) minor jumps where (I guess) originally the reels had to be changed, but overall this is one of Wild East’s most satisfying releases. There’s only one audio track, English LPCM 2.0 Mono. It is very loud and strong, doing full justice to Marcello Giombini’s fine score, but there are quite a few lip-sync problems and some lines spoken by the actors are completely absent. Once again Wild East is a bit chary of one’s favours as far as the extras are concerned: apart from three Antony Ghidra trailers, there’s an alternative English credits sequence and a (admittedly impressive) picture gallery with stills, posters etc. 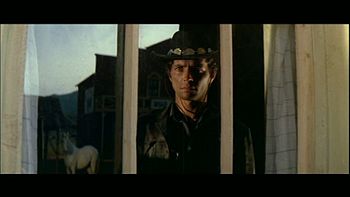 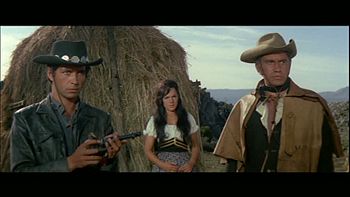 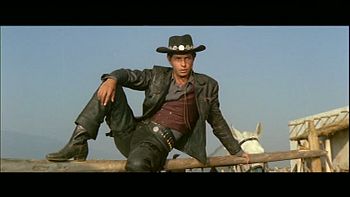 Retrieved from "https://www.spaghetti-western.net/index.php?title=Pistoleros_DVD_Review_(Wild_East)&oldid=70788"
Categories:
Cookies help us deliver our services. By using our services, you agree to our use of cookies.