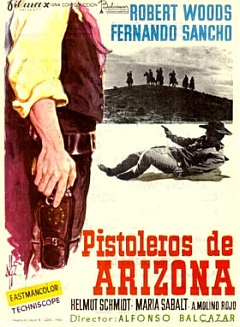 On posters, Helmut Schmid is credited as Helmut Schmidt, which is how the former German Chancellor is spelled.

Typical early SW which has a quite naive story and storytelling, here with seemingly endless and often badly edited fights with fists and guns. Like several others of those mainly Spanish genre contributions it contains on the other hand some good location shooting. Robert Woods in his first (and untypical) SW lead seems to imitate Giuliano Gemma, only that 5000 Dollars on an Ace was made before the Ringo films. // by Stanton

Retrieved from "https://www.spaghetti-western.net/index.php?title=Pistoleros_de_Arizona,_Los&oldid=138771"
Categories:
Cookies help us deliver our services. By using our services, you agree to our use of cookies.