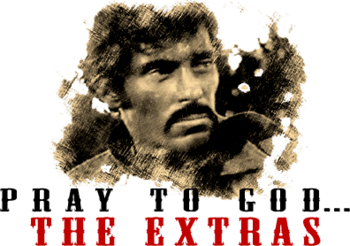 In his book, Marco Giusti states that he was told by Robert Woods that Fidani directed the movie; Woods seems to have confirmed this during a phone conversation with Phil H(ardcastle). However, forum member Stanton claims that Woods told a German SW fan on facebook that "Mulargia directed it and Fidani produced it." (1). Again according to Giusti, Fabio Piccioni, who co-wrote the screenplay, also states that Mulargia directed it. Editor Piera Bruni, on the other hand, claimed that he has never worked with Mulargia and Fidani himself said - in an interview with Nocturno - that he 'turned to directing' (after writing an infinite number of scripts) with a movie called Prega Dio... e scavati la fossa! (2).

Giusti himself has put forward an interesting theory: he says it's possible that it originally was Mulargia's movie, but that Fidani 'bought it' from him. Giusti uses the word 'comprare', meaning 'buy', and it's possible that some money was involved, after all Fidani produced the movie for Mila Cinematografica. According to Piccioni, Fidani also replaced the original producer Corrado Patara, who was only interested in the project because ... he wanted to get actress Cristina Penz into his bed.

Let's summarize the situation. After Cipriano (Cameron) has kidnapped Consuelo, Don Enrique refuses to pay the ransom money and threatens to slaughter an entire village of peones. To save the life of these innocent people, Fernando must turn against his former friend and try to liberate Consuelo. Don Enrique has already hanged several peones and Fernando is caught in a stranglehold. He chooses to liberate the girl in order to avoid a massacre, but is forced to kill his former friend in the process. So far so good, but when Fernando brings back the daughter to her father, we get an ending of the type 'all's well that ends well': Consuelo is reunited with her lover, Don Enrique releases the peones, Fernando is pardoned and gets permission to leave the premises ...

Retrieved from "https://www.spaghetti-western.net/index.php?title=Pray_to_God..._Extra_Page&oldid=90608"
Cookies help us deliver our services. By using our services, you agree to our use of cookies.