Pray to God and Dig Your Grave Review 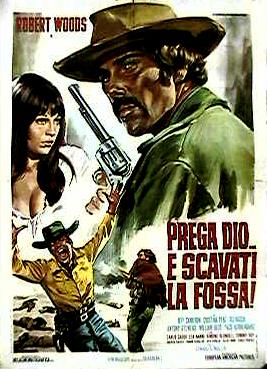 Fernando, a young Mexican drifter returns to his homeland after news of his sister and brother's death reaches him. He immediately starts to inspire his friends to revolt against the tyrannical land owner who had them killed. He soon amasses a large force but his friend, Cipriano, has turned to banditry and has no interest in Revolutions. When Cipriano kidnaps the landowner's daughter in Fernando's name, the two friends must meet face to face.

Edoardo Mulargia's reputation in the genre is solidified by only one film, El Puro, which many praise as one of the best Spaghetti Westerns. But the same director was also responsible for the equally great yet sadly obscure and troubled, Pray to God and Dig Your Grave.

On first viewings, people have and will be extremely confused and this results in ruining the film. But the reason for all this is not the film itself, but the unbelievable editing job that was given to this film. While the first 30 minutes are very pleasant and easy to follow, at the 35 minute mark, the film jumps far ahead into a later portion of the film with characters already introduced who had not meant to be introduced. Then at 53 minutes, the film jumps back to the scene that should have been right after 34 minutes. The editors had accidentally mismatched the scenes! So if you find yourself with a copy of the film and it is not making sense, at the 35 minute mark, skip ahead to 53 minutes and watch freely till 70 minutes. Then search back and watch 35-53. Confusing sure, but necessary.

The film itself is very good. This marks the beginning of El Puro territory. Much of the film is sort of a character drama between Fernando and Cipriano. And thankfully with a very quick pace. Beyond great character development, the film also mixes elements of the Zapata and Revenge Spaghetti genres quite nicely. In addition to this great mix of sub-genres is a very prominent atmosphere. Very dark and gloomy with a very strong sense of melancholy as if nothing will go according to plan. Which it doesn't. 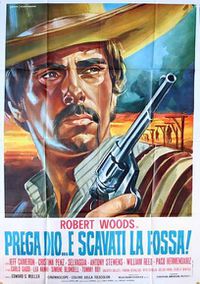 One problem with the film's content for me was that I found the interplay and fallout between Cipriano and Fernando a little weaker than they intended. We are supposed to believe that the two are great friends but they seem more acquaintances than friends. There is never a real warm feeling between them and the falling out is too obvious. But what is created in and around this setup is great.

The acting is pretty much good all around. A surprising standout performance from Fidani actor/stuntman Jeff Cameron who is often bashed for his lack of charisma. He is a Mexican bandit here and he seems to thoroughly enjoy his role. He plays it as big and over the top as he could and steals the show in a way from Woods. Bobby Woods is great as usual and plays his performance quiet and collective with proper bursts of anger. One interesting performance comes from the films producer. The one and only..................Demofilo Fidani! He is in his sunglasses again as a chess playing patriarch.

The music is very subtle and although I watched the film only days ago, I cannot recall a single line of music. But I remember it wasn't too bad and had the feeling of a Fidani score from Lallo Gori. Lots of horns come to mind.

A sadly underrated and under appreciated film muddled for most by a kindergarten editing job. But when viewed properly, the continuity, action, interplay, and performances come through fine. --Korano 17:30, 5 September 2009 (UTC)