Pray to God and Dig Your Grave Review (Scherpschutter) 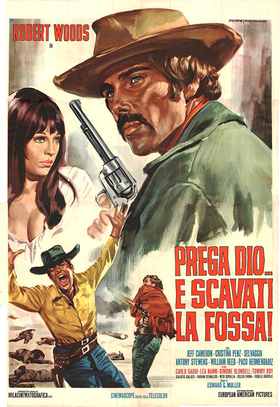 A Mexican, living in a self-imposed exile across the border, returns to his home country after the murder of his brother and sister by a ruthless landlord. He joins forces with a former friend to start a people's revolution, but his friend has turned to banditry and is only interested in money. A lively Zapata spaghetti, made on a shoestring, with lots of action, lots of beautiful señoritas, some inspired cruelty and an offbeat, bizarre ending.

A minor Zapata spaghetti with Robert Woods (all make up and moustache) playing a character called Fernando Calmayo. Woods had already played a Mexican in his two Pecos movies, My Name is Pecos and Pecos cleans up; the character of Fernando was, in his own words, "a poignant but loosely based composite of several heroes of the Mexican revolution". The movie is signed by Edoardo Mulargia, but according to some it was directed by Demofilo Fidani, officially only credited for producing it (*1)

Fernando is living in a self-imposed exile across the border, but returns to his home country after his brother and sister are killed by a rich landowner, Don Enrique, and his associates. He joins forces with a former friend, Cipriano, to start a people's revolution, but Cipriano has turned into a money hungry bandit who kidnaps Don Enrique's daughter to collect a large sum of ransom money. Don Enrique is not willing to pay and threatens to kill five peones every hour if the girl isn't released. Fernando must now choose between his personal feelings of revenge (and a possible social turnover) and the lives of the innocent peones ...

Set in 'feudal Mexico' (as an on-screen text tells us), the film opens as a Zapata western, but Woods' character is as much an avenger as a revolutionary and the anti-climatic finale (it will be discussed in a special section) seems to deny the movie's outset. As a Zapata western it is betrayed by the ultra-low budget; obviously the camera never left Italy, so instead of arid Almeria locations, we get sandpits and lush green hills. A regiment of federales consists of no more than twelve men and there also seems to be no more than one village in the entire country. Even the local priest looks as if they had him on loan from the Vatican ... But there are also a couple of cute camera angles and scattered moments of inspired brutality. The movie opens with the landlords discussing their right to prima nocta (2) and the custom is illustrated with a mean-spirited rape scene; we also get the familiar situation with a man buried to his neck in the ground and for once he is not saved in the last moment: in a brief but unusually graphic scene we even get to see the bloody results of horses' hooves trampling his head.

Woods looks a bit confused in a couple of scenes but he and Cameron (who turns in a lively performance) act well together. Both leading ladies - Cristina Penz and Lea Nanni - look gorgeous, and Simone Blondell (Fidani's daughter) can be spotted in a couple of scenes as Don Enrique's maid. This is a low-budget Zapata-spaghetti, but it's lively, relatively well-made and worth a look.

For the SECOND PART of this Mini Special:
Go To: Pray to God... Extra Page