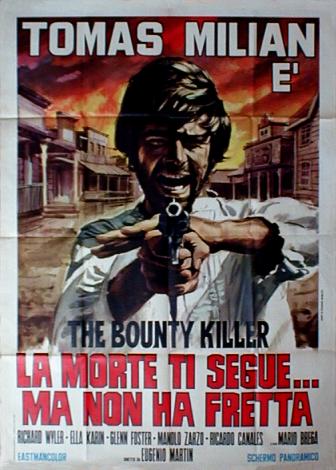 I have written before about good actors and directors whose work doesn't always maintain the same high standards that you expect from them. But with artists that are less well thought of you don't normally face this problem. As a rule of thumb, if someone is a bit second rate you can usually count on them to always be a bit second rate. The Bounty Killer directed by Eugenio Martin blows this theory out of the water.

My previous experience with Martin's work had been through Bad Man's River and Pancho Villa, two films from 1972 that did nothing for his reputation with me. On the contrary, they had set my mind firmly in the opinion that this was a lesser director churning out second rate films despite good casts. Bad Man's River in particular has the benefits of Lee Van Cleef, Gina Lollabrigida and James Mason and still manages to be a turkey while Pancho Villa, although better, is hardly a classic. Imagine my surprise then when The Bounty Killer not only showed signs of genuine quality but proved itself to be a tight, psychological oater of the highest calibre. In one swoop Eugenio Martin has transformed his reputation in my estimation.

The Plot is a relatively simple one. Bounty Hunter Luke Chilson (Richard Wyler) is trailing convicted bandit Jose Gomez (Tomas Milian) who has been assisted in his escape by a childhood friend (Ella Karin) from his village. Chilson's attempt to take Gomez back into custody is thwarted by the loyalty of the local people, all of whom remember Gomez fondly and believe he has been driven to banditry through injustice and persecution. However, as Gomez's friends descend on the settlement old friendships are tested and loyalties begin to unravel. Is Gomez really the man they think he is?

At the heart of this film is the central performance of Milian as the enigmatic bandit. Amazingly, this is the actor's first appearance in a western and it is a genuine tour de force. I couldn't help but be reminded of Brando in his quiet dominance of each scene. Subdued and understated, Milian's portrayal of Gomez suggests a tortured soul struggling with conflicting instincts. His face offers glimpses of inner monolgues and conversations going on that we never hear; only see the results of. But the overall impression is of a man committed to a path of self destruction; at once defiant and resigned to his fate. This is Milian at his very best and is a role which allows him to really flex his talent. When this happens you know you are in for a treat as he is without doubt the most gifted actor to regularly appear in the Spaghetti genre. There are a number of actors who look the part and who can handle the strong ,silent, hero type of role without breaking too much of a sweat but, for my money, Milian stands alone as a truly gifted actor who brings a completely different quality to the parts he plays. How he never became a major international star outside of europe is truly beyond me.

But, despite this clearly being a film dominated by Milian's performance it would be unfair to ignore the significant contributions by the rest of the cast and crew. Actors can't work without a script and this one is well constructed by Jose Gutierrez Maesso, James Donald Pringle and the directr, Eugenio Martin. Martin also handles the direction with real skill. His visual style may not be as flamboyant as some of his contemporaries but this film is always captivating to look at and his use of close ups, if more economic, never lacks impact. Milian's death scene, complete with dribbling, dirt encrusted mouth is a perfect example of this. Martin also keeps the story restricted to a few locations, in particular the tiny settlement, and this helps add a constant sense of claustrophobic tension to the entire piece. This is all assisted by the expert cinematography of future director Enzo Barboni and the fine musical score of Stelvio Cipriani.

The rest of the cast also bring solid work to the project. Richard Wyler carries the titular role effectively if without the level of ambiguity I would have liked, Ella Karin (or Helina Zalewska if you prefer) is convincing as the loyal girlfriend faced with a moral dilemma and Mario Brega gives possibly his career best performance as the town blacksmith whose actions in defense of Gomez come back to haunt him as time goes on. There is also, for the purest, a couple of very satisfying appearances from 'genre faces' Tito Garcia and Jose Canalejas as Gomez's gang members with suitably gritty and menacing visages. What more could you ask for except maybe Rosalba Neri smouldering in the background somewhere?

This then, is a first class spaghetti in anyone's book and well worth seeking out if you are able. It goes, of course, under a variety of titles depending on what part of the world you are in. The Ugly Ones, El Precio de un Hombre, even La Morte ti Seque...Ma non ha Fretta. But the easiest way to see it is to get the german Marketing Film release entitled Ohne Dollar Keinen Sarg which is pretty cheaply priced, has an english audio option and is available at amazon.de among other places. Highly recommended to anyone, but essential viewing for any spaghetti fan. --Phil H 18:32, 15 March 2008 (CET)