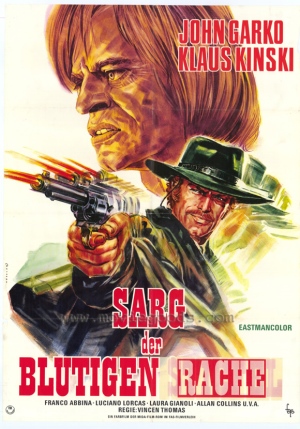 As a young Mexican girl is killed by an unseen assailant, three men rob a saloon; killing a prostitute and the bartender in the process. The citizens of Appleby blame the robbery on a local thug, Chester Conway. He is convicted on circumstantial evidence and sentenced to hang. His lawyer and the saloon madame know he is innocent and hire gunman, Silver, to prove Chester's innocence and uncover the real culprits. But is Chester completely innocent?

By the early 70's, the Spaghettis were losing ground to Comedies and Gialli. But still, many Spaghettis were still being made. Price of Death combines both the mysterious thrills of a Giallo detective story, with a mild dose of Comedy. And surprisingly, these two aspects harmonize rather well to make a thoroughly engaging and atmospheric slice of Spaghetti pie. Though it has been the subject of a good amount of negative opinions, some like me, find it to be a surprisingly good film.

A lot of films that are borderline comedies get some flack for their undecided nature. A Sky Full of Stars for a Roof being probably the best example. I myself have never had a problem with this. I usually feel that a bit of comedy helps as the films that usually are these borderliners can also be exceptionally dark. It's obvious that this film is not a comedy despite some elements. It is a dark and mysterious film and the small bits of lightheartedness gave me a bit of relief. It evens out the film and keeps it from being too heavy. Though it seems apparent that these scenes were filmed for the sole purpose of catering to new trends. But on a whole I felt it gave the film more character and likeability.

What I found most impressive about this film is the very mysterious and thick atmosphere that the film emitted. No small thanks going to Mario Migliardi's avant garde loungy score. Unlike other Spaghetti mysteries like Killer Caliber .32 and Kill the Poker Player, I found Price of Death's atmosphere engrossing and made the plot of the film much easier to follow. It hardly ever loses focus and Migliardi's ear candy made every scene a joy to view, if only to listen. As a detective mystery, the film is successful. The clues and interconnecting plots all made sense and never got too intricate while never lacking logic. The characters also play a big part in the film as each one is connected to the main storyline in some way. Nobody seems thrown in to take up space and runtime. Finally, the whodunnit aspect is extremely suspenseful and the reveal is a shocker. 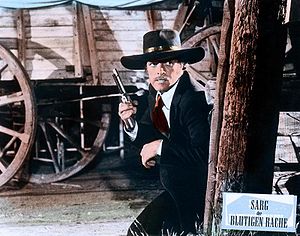 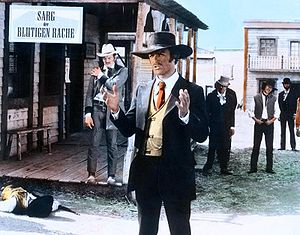 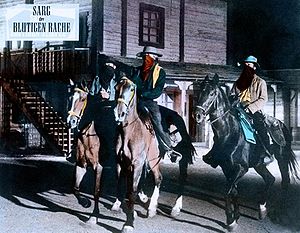 The cast all do fine jobs in their roles. Garko has played this role a thousand times and by now he had perfected the refined gentleman gunfighter. He plays Silver like Sartana, full of smartassed remarks and ridiculous gadgetry (though toned down to a degree). However, this film may contain Garko's lowest Western kill count (he only claims 1 life!). Franco Abbiana was the show stealer for me. This is natural as he gets the most entertaining part as the drunken lawyer. He has a great combination of fun humor and respectable intelligence. The Kinski character is probably the most cliched Kinski role he ever played. There is not one scene in the film where he is not flailing his head, lunging out at someone, or respectful in any way, shape or form. This makes sense since it's also one of his smaller roles in a non-Fidani role. He's mainly left to the background. You'll probably tend to forget he's there even though he not only drives the plot but is also Klaus Kinski! And in one of the many cases of Kinski trying to add another level to his character's nastiness, Kinski also was bad on set. Director Palli and him didn't get along, surprise!

Perhaps the film's strongest element is Mario Migliardi's aforementioned score. Migliardi also composed the psychedelic rock score for the equally avant garde Matalo!. Several tracks from Matalo! are recycled in this film. For the most part, these recycled bits fit well with this film but the acoustic version of Matalo!'s theme seemed a bit odd here. There is no real way for me personally to describe the score. But whatever it is, it's wonderful.

Though favor is against this film, I'd still recommend it without reservations as I found it to be a great surprise and I will definitely be looking forward to the upcoming DVD release from Koch Media. But for now, check out X-Rated's release of the film with English and German audio. Or the Sartana Saga release. Whatever your means are, just check it out. --Korano 00:20, 19 February 2010 (UTC)