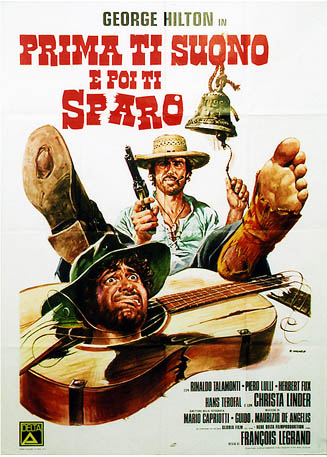 The small town of Little Lake is being terrorized by the mysterious, unseen bandit El Moro and his gang. When the townfolk have to bury their 16th Sheriff, they decide to finally get professional help and reach out to legendary gunman Red Jack. He agrees to help for 20.000 $ and telegraphs back that he will arrive in a few days. Unfortunately, the people of Little Lake do not know what Red Jack looks like, only that he wears a red stetson with three bullet holes. On his way to town, Red Jack gets shot in the back, his hat is found by a tramp called Nick. When Nick arrives in Little Lake, he is mistaken for the gunman and urged to take the new Sheriff’s position. Luckily for fearful Nick, more new people have arrived in town: guitar wearing poker player Johnny and four unemployed but very attractive female acrobats. This unlikely team soon means serious trouble for El Moro and his gang.

Director Francois Legrand is really Austrian veteran Franz Antel of mostly comedies and sexy films. The German title translates as „The little black one with the red hat“ and naturally does not refer to George Hilton but second-billed Rinaldo Talamonti. Talamonti is an Italian actor who did countless sex comedies in Germany. The US and French titles make Hilton yet another Trinity, but in the film it is Talamonti’s character who has a Trinity-like entrance, snoring on a bed mounted to his horse.