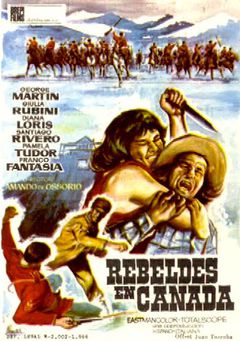 Rebels in Canada (see Database Page) is the second (and last) western by Spanish director Amando De Ossorio, who would turn to the horror genre and become one of the most popular horror directors of his country thanks to the Blind Dead movies (1). Unlike his first western, Tomb of the Pistolero, this was a co-production with Italy.

The story is set in Canada, in the heydays of the Hudson Bay Company, a fur trading business. Owning the entire area of the Hudson Bay, known as Rupert’s Land, the company was among the largest landowners in the world. In the movie a group of French speaking trappers, aided by local Indians, rebel against the company and their arrogant British representative, Sullivan. With the help of the Royal Mountain Police, Sullivan tries to put down the insurgence in bloody fashion, but the rebels get the help of a frontiersman called Victor, whose brother was killed by Sullivan. Victor and rebellion leader Limoux decide to kidnap Sullivan’s daughter and use her as a bartering tool, but when the hostilities flare up on the banks of the river, Victor and the young woman fall in love.

Although some of the story elements have a historic background the movie is pure fantasy and no effort was made to give it an authenthic look; the trappers all wear Davy Crocket fur hats and the weapons on display are an odd mix of hand guns and other fire arms that only came into use much later. There are no gun duels, no dusty streets, no sweaty faces or brooding looks, instead there are several fistfights and two battle sequences, with the Mounties charging the rebels in full cavalry style, sabers drawn. The body count is surprisingly high for an early European western movie, but the movie lacks the mean and dirty atmosphere that would soon be associated with Italian and Spanish western movies. The atmosphere is closer to James Fenimore Cooper than to Sergio Leone and occasionally I even had the weird feeling that I was watching a Robin Hood movie, with Victor & the boys fighting the evil Sheriff of Nottingham.

Martin is a good-looking, if somewhat bland hero, but Franco Fantasia and Raf Baldassare are good rebels and there are three lovely ladies: the kidnapped daughter, a halfbreed Indian woman (in love with the rebel leader) and a gypsy like beauty (in love with the hero). Most reference works, including our database, have things mixed up completely: Pamela Tudor is not the kidnapped girl but the halfbreed woman, Giulia Rubini is not the dark lady in love with Victor but the blond girl who’s kidnapped by him, and Diana Dorys is not the Indian woman but the fiery dark-haired beauty waiting for the hero to come home, eventually discovering that he has been dallying with the blonde. The cinematography of the Spanish landscape is quite nice, especially during the finale, set on the snow-capped hills of the Spanish Rocky Mountains (2). Giulia Rubini looks ridiculous with that blond wig but both Pamela Tudor and Diana Lorys are dark-eyed furies and for your entertainment they are having a wicked cat fight near the end of the movie. There’s also a scene in which lovely Lorys is tortured by the evil Englishman, who wants to know where his daughter and her kidnapper hang out. De Ossorio’s direction is routine, but he excels as soon as things get deliciously wicked. Yes, he was a horror director.

An early eurowestern by a director better known for his horror movies. Set in Canada, with Martin as a frontiersman who joins a group of trappers in their fight against the almighty Hudson Bay Company. Lots of action but no real spaghetti western atmosphere