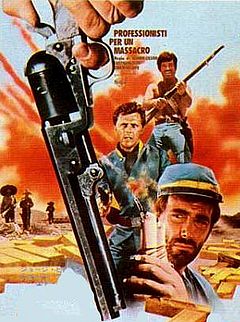 Hilton, Martin and Byrnes are three bandits who have joined the Southern ranks during the Civil War. They’re caught red-handed selling guns to the Union and are sentenced to the firing squad. A general saves their lives at the last minute, offering them a chance to redeem themselves by retrieving a fortune in gold, stolen by the treacherous Major Loyd, who’s on his way to Mexico with it. Supervised by a Confederate officer (after all they’re still ‘prisoners’) they go in pursuit, but there are various competitors in the field, among them a bunch of Mexicans, as mean as they are ugly ...

Like Kill Them All and Come Back Alone and A Reason to Live, a Reason to Die, this movie uses the premise of Robert Aldrich’ The Dirty Dozen, but it was equally influenced by Leone’s The Good, the Bad and the Ugly and Castellari’s Any Gun can Play. It plays like a picaresque adventure set against the backdrop of the Civil War and with Castellari's movie it shares the colourful mix of tongue-in-cheek humor and violent action, as well as a couple of actors. Some added-on horror elements and three women of rare ugliness occasionally give the film a graceless, almost outlandish look, as if no other than Jheronimous Bosch had done the casting and costume design.

Some think this is director Cicero’s best western, but I do not agree. It seems to have all the right ingredients, but somehow the cocktail won’t sparkle. The first fifteen minutes - the trio performing their felonious tricks while their colleagues fight off the enemy – are good fun, but afterwards the movie quickly loses focus. There are a few scattered good moments throughout, but too often the humor glides off into slapstick and the violence is simply too extreme to work within this context. There’s a scene in which a young woman is confronted with the sight of her dead family members, who were slaughtered in brutal fashion by Major Loyd and his gang of cutthroats. It's a good, powerful scene, but in my humble opinion you cannot mix this with saloon brawls in Trinity style.

Okay, in the end it may all be a matter of taste. The movie may be inconsistent, but it's not dull and it certainly is flamboyant. Thanks to Francisco Marin's cinematography it has a gorgeous look. It also has a good cast, but Hilton hams it up as a defrocked priest and explosives expert (I prefer him in a more laid-back acting mode) and Martin isn’t helped by his haircut, a sort of permanent wave Mexican style. Edd Kookie Byrnes is okay (he usually is in spaghettis) and so is Herter, whose Major Loyd is another of those outrageous spaghetti western villains he has portrayed over the years. José Bodalo holds his own quite well in this collection of curiosities as the oldest son of a depraved family of Mexican bandits, led by no other than Bloody Mama. And then there’s this persistent rumour that Sylvester Stallone had a hand in this production. Some say he played a small role in it (as a soldier), others say he co-produced it (the cover of the recent French DVD still mentions him as one of the producers). It seems very unlikely, but then again: where do these rumours come from?

I watched the French DVD, released by SNC. It’s one of those releases with a cover design by Fluide Glacial that is more than just a bit bizarre (actually this one isn't too bad). As usual the image quality of the release is glorious: the film is anamorphically enhanced, presented in the right widescreen format, colours are strong and there’s only very little print damage. Note that the release is NOT English friendly. There are two audio tracks, French and Italian; both have a bitrate of 192 kb/s and are equally good, but dialogue is brought a bit more into prominence on the French track. The French track is incomplete, parts that were never dubbed in French are presented in Italian with French subtitles. The Italian track can either be watched with or without subtitles.