A hotchpotch of a cast for a mishmash of a movie. During a robbery a samurai sword is stolen and a bandit is betrayed by his partner. The bandit wants the loot from the robbery, a samurai wants to save his honor, and a blond señorita makes things even more complicated
___________

By 1971 Sergio Leone seemed no longer interested in making westerns and pale imitations of the Trinity comedies dominated the market. The French-Spanish-Italian co-production Red Sun was more a less an ultimate effort to breathe new life into the European production of large-scale westerns. To cover all possible markets, Charles Bronson was cast alongside French cult actor Alain Delon, Japanese Kurosawa regular Toshiro Mifune and Bond girl Ursula Andress. Now that’s what I call a cast! 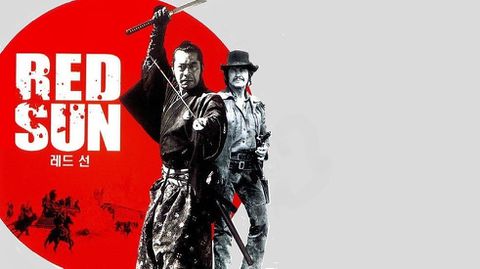 But what about the script? Well, the story is set in 1870. The Japanese emperor wishes to express his respect to the US president by offering him a precious samurai sword. It is brought to him by train, escorted by the Japanese governor and two samurai, but the train is robbed by outlaws. The robbery is successful, but one of the leaders of the gang (Delon) wants to keep everything for himself, including the precious samurai sword, and tries to kill his partner (Bronson). Bronson survives, but is then forced by the Japanese governor to retrieve the sword with the help of samurai Mifune. The samurai wants to kill Delon rightaway, but Bronson wants to catch him alive, in order to get the loot from the train robbery...

The casting of both Bronson and Mifune meant that one of the Magnificent Seven was in one movie with one of the Seven Samurai. And note that Delon was Le Samourai in Jean-Pierre Melville’s movie with that title. Andress was not the only Bond connection: Director Terence Young had helmed three Bond movies, including the first one, Dr. No, that had turned Miss Ursula into screen legend Honey Rider, the blond shell diver who rose out of the Carribean Sea in a white bikini. Red sun cannot be called serious but it's not a real comedy either and some of the violence is quite graphic for a mainstream production aimed at large audiences. 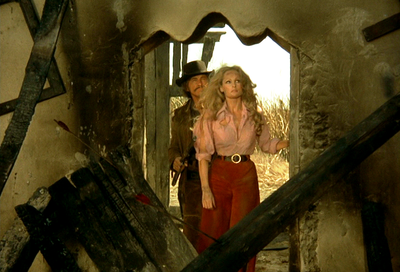 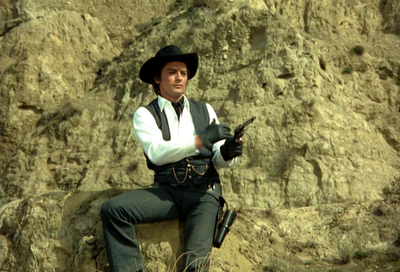 Mifune's character, or at least his behavior, seems modeled after the characters played by Lee van Cleef in many of his European westerns (*1): he's a stoic, unflinching professional, marching through to the movie with a grim on his face, eventually taking out his sword (replacing Van Cleef's usual collection of fire-arms) to prove his efficiency. Because Mifune has only a handful of lines throughout the movie, Bronson's part was rewritten on the set: in complete contrast to his usual taciturn roles, his character is surprisingly verbose and lively, often verging on hyperactivity. The sophisticated Alain Delon is an odd appearance in a western setting, but he wasn’t completely new to the genre - he had been in the American movie Texas Across the River - and seems to enjoy himself as the black clad "Gauche" (= Left, his does everything with his left hand). His family name is by the way Kink, and since Bronson’s charactar is called Link, we get a pair of outlaws called Link & Kink. I’m not making this up. Andress turns in a particularly weird performance, acting like a madcap blond señorita.

Most contemporary critics called it horrendous, but the movie has aged reasonably well; it’s far from great, but at the same time a lot better than most other east-meet-west westerns of the decade, and - in spite of some lame jokes and odd names - far less ludicrous. It makes at least some sense and the action is not entirely bonkers. Everything is thrown in to make it worthwhile, including Indians, hookers and a lot of fake blood. Young directs anonymously, but the movie is beautifully shot, using the Spanish locations to excellent effect, and the finale, set in a burning cane field, is a well-crafted, spectacular set piece. 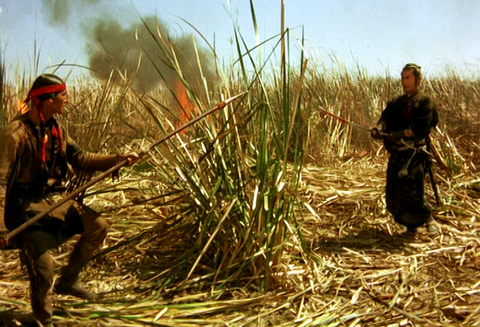 Simon Gelten is a long time contributor to the SWDb. "I'm not as old as Tom B. but I'm working on it. I hope to catch up with him by the end of the next decade.", he says. Simon saw all movies by Sergio Leone and several by Sergio Corbucci in cinema, most of the time in Eindhoven, the city where he was born. Currently, Simon is living in Turnhout, Belgium. Simon is active within the database as both Scherpschutter and his alter ego Tiratore Scelto.
Retrieved from "https://www.spaghetti-western.net/index.php?title=Red_Sun_(Soleil_Rouge)_Review&oldid=122266"