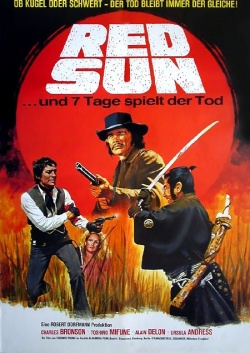 Outlaw Link (Bronson) and his gang hold up a train. But beyond the strongbox full of gold, the train also holds the Japanese ambassador and his guards. The ambassador is in America to deliver a gold samurai sword to the President as a gift from Japan. After the robbery, Link is betrayed by his French partner, Gauche (Delon) who also steals the sword. Link and the ambassador's guard, Jubi (Mifune) must join forces to recover the sword and exact revenge.

To start, this film is supposedly the first "East meets West" western. Stranger in Japan was made before this film but released afterward. It was quite successful and deservedly so. It's a clever genre mixture incorporating western and samurai film. The mixture is better than it sounds. Possibly due to the strangely convincing chemistry between Mifune and Bronson.

This film has some light-heartedness to it. But unlike pretty much all of these type of comedy westerns, it can be quite funny. Not physical humour but little moments that bring a smirk upon your face. But it is not a comedy. The comedy present is sparse and the bulk of the film is a regular western despite the presence of a Japanese Samurai.

The film started a small sub genre, the "East meets West" western. Genre god Sergio Corbucci made The White, Yellow, and the Black, a title which rips off Sergio Leone's film and borrows strongly from the plot of Red Sun. The Fighting Fists of Sahnghai Joe, Kung Fu brothers in the Wild West, and Return of Shanghai Joe are all additions to the subgenre, while films like Shanghai Noon and Sukiyaki Western Django have given a new impulse to the subgenre in recent times.

The acting is good. Bronson was a classic case of late blooming. He was nearly 50 years old when he became a house hold name. Because Once upon a time in the West was more successful in Europe than in the States, he made several films in France and Italy in the early seventies. The success of Red Sun gave another boost to his fame. He is less wooden here and far more animated. Can be humorous and violent. Mifune's performance is hard to decipher. He plays the angry Samurai very well. Very strict and mean but honourable of course.

British director Terence Young is famous for starting the James Bond franchise with Dr No. Nothing really feels out of place and he directs the action scenes very well. He makes the perfect western here with humour, violence, and gore. In fact, this film is rather gory and possibly ran into some censorship problems upon it's release. Mifune's sword does produce quite a lot of blood. Great directing anyway.

The musical score was performed by Maurice Jarre who also did the exceptional job with the score to the Spanish filmed western El Condor. He uses a similar style here but not as good. Of course he has to use Eastern instruments but the main theme sounds somewhat whiny. But the score is hardly noticeable.

An interesting French made Spaghetti Western but don't expect any Cemetery Without Crosses with this one. It is far more humorous but not as good as Hossein's movie. Violent and exciting. Great characters and a very engaging storyline makes this an enjoyable western. Red Sun.