Requiem for a Gringo Review 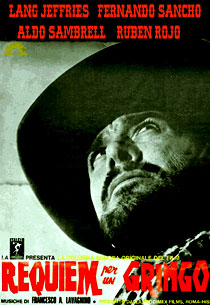 A remote hacienda is raided by a gang of Mexican bandits led by the infamous Porfirio Carranza, and the owner and his family are all killed. A young visitor is killed too and the peons who work on the land are terrorized. But then rumours start spreading about a mysterious Jaguar Man who is said to have magical powers. When he comes to the aid of Nina, a peasant girl who’s constantly harassed by one of the gang members, he tells her about a special date, April 17th. When the day has come, the Jaguar Man arrives at the hacienda where Carranza is now residing and asks him for a duel with one of his three most dangerous henchmen. The three men have been missing for days and it turns out they were all killed by the Jaguar Man. When Carranza orders his men to shoot him, the Jaguar Man points at the sky, and the sun is eclipsed by the moon …

The premise of this movie may be a rather basic revenge story about a man avenging the violent death of his younger brother, but Réquiem para el Gringo is one of the most enigmatic spaghetti/paella westerns I have ever seen. Made in 1968, it often feels like one of those early Spanish efforts without much Italian involvement: there’s no Italian director, no Italian costume design and no familiar Italian western town. Actually, the film often doesn’t look like a western at all: the production design is austere, the imagery outlandish, with an arch-way in the middle of nowhere, women dressed like madonnas, and a funeral procession in the middle of the desert. The atmosphere is mystic, biblical, hermetic, often more reminiscent of Buñuel or Pasolini than Leone. The Jaguar Man is referred to as a man with magical powers and the way he kills his first opponents (when his ranch is under attack) is presented as a kind of conjuring-trick, including rolling drums and fluttering pigeons to underline the idea. Is he only a very gifted man, an astronomer and a meteorologist, or is he supposed to be a half-God? The Jaguar poncho could be a reference to the Jaguar God of the Mayas, people renowned for their astronomical knowledge, and in at least one sequence he seems to have special powers: during the ‘execution’ of Charley, the character played by Aldo Sanbrell, he is able to block his opponent’s way by taking impassable detours through the mountains, with his mule. Meanwhile Chris Casey claimed that Aldo Sanbrell declared in 2004 that the film was a kind of remake of a Japanese film. Chris identified this film as Kobayashi’s Seppuku (aka Hara-kiri).

Réquiem para el Gringo was scripted by Maria Del Carmen Martinez Roan, who also was involved in the writing of Django Kill!/If you live… shoot! Both films have this outlandish, almost surreal nature in common, but while Giulio Questi’s allegory feels like a trip, José Luis Merino’s movie feels more like the rude awakening afterwards. It is interesting, but it’s also lethargic, often dead slow, with the Jaguar Man tottering around on his old mule, mumbling about April 17th, and the villain Porfirio Carranza residing in the Martinez ranch as if it were his court, admiring his jewel box, coddling his groupie Alma, who dresses up and dances for him like a harem lady (but has an affair behind his back with one of his lieutenants). On the other hand some story elements are handled well, like Jeffries using the defects of character of his opponents to eliminate them: he uses Sanbrell’s superstition and Gaddi’s sexual obsession, and won’t give the treacherous Rojo a fair chance because he doesn’t deserve any.

I have the same mixed feelings about the performances; the heavily built Jeffries probably was more appropriate for the peplum genre (for which he went to Europe initially), but his robust appearance suits his character rather well. Actually most actors suit the film quite well, still I found some of the performances dangerously close to parody, with both Sancho and Sanbrell overdoing their usual impersonations of villainous Mexican weirdos, and Gaddi, quite on the contrary, almost laughably cool as the black-clad gunman who’s after the beautiful peasant girl Nina. She is played by Marisa Paredes, best known for the films she made with Spanish cult director Almodovar; she’s only eighteen years old here, and more beautiful then ever. And what’s more, there’s a very sexy scene, most certainly an asset, especially for lovers of wet under garments. And then there’s Angelo Francesco Lavagnino’s score, without any doubt an asset too: it’s beautiful, haunting, with themes that will stay with you for days.

There are several versions of this movie in circulation, with various running times and scenes either cut entirely or edited in a different order. The version I saw ran a little over 94 minutes and contained Paredes’ wet underwear (and everything underneath it), but lacked an infamous slicing-of-a-hand scene, probably only included in the Spanish DVD. The German VHS runs only 78 minutes and shows the 'executions' of Sanbrell, Gaddi and Rojo in chronological order; in the longer versions these scenes are shown as flashbacks during the duel in the eclipse of the (English) title. Some sources list Eugenio Martin as co-director, but his name doesn’t appear in any of the credit sequences I managed to retrace.

When I saw this movie for the first time, over thirty years ago, I didn’t like at all, most probably because of the slow pace. I like it a lot better now, although I still have the feeling it’s more interesting for what it aspires than for what it achieves. But I know there are fans of the genre who rate it much higher.

Some additional info and possible ANSWERS can be found here: