# 1. I knew the Spanish had several names and their ‘name pattern’ was different from ours, so I thought first they had changed the Spanish names but respected the Spanish pattern. But like Phil has explained on these pages, the Spanish have two surnames. The first is paternal and the second maternal. So, for example, in the case of Gabriel Garcia Marquez, Garcia would be his father's name and Marquez his mother's. The names clearly don’t follow the pattern. Moreover, they aren’t (so it seems) ‘anglocized’Spanish names; the same names, Ross Logan and Dan Ross, are mentioned in the film’s review (by our friend Julio Alberto) on the Spanish site 800 Spaghetti westerns:http://800spaghettiwesterns.blogspot.com/2008/07/rquiem-para-el-gringo.html

Still … meanwhile I found a French poster with different names for several characters:

# 2. He might be wearing a typical Mexican costume to impress the señoritas. After Ross’s homecoming, a servant tells him that his younger brother is paying a visit to the Ramirez ranch, because he’s taken some interest in the ladies lately. Apparently both ranches are located on different sides of the border, the Ramirez Ranch in Mexico, the Logan Ranch in California (in the opening scene Sancho tells his men about California, and says it’s dangerous for them to cross the border with the entire group; subsequently he selects a few of his men, and sends them to the Logan ranch). For a Californian guy living close to the border who wants to court a Mexican señorita of his age, it seems not a bad idea to buy a Mexican costume to impress her.

# 3. Now I’ve racked my brain about this damn mule. Most people will be inclined to read it as a reference to A Fistful of Dollars; after all Clint rode into the genre, and film history, on a mule, but given the solemn, biblical atmosphere of the movie, it could also refer to Jesus entering Jerusalem on a donkey, as described in Mathew 21:4-7 ; several scenes reminded me of the iconic images of Christ weeping over (left) and entering Jerusalem (right): 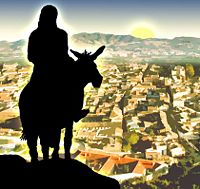 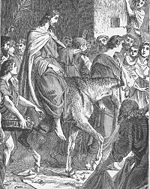 “4 All this was done, that it might be fulfilled which was spoken by the prophet, saying, 5 Tell ye the daughter of Sion, Behold, thy King cometh unto thee, meek, and sitting upon an ass, and a colt the foal of an ass. 6 And the disciples went, and did as Jesus commanded them, 7 And brought the ass, and the colt, and put on them their clothes, and they set him thereon."

This may sound a bit far-fetched, but like I said before, the genre is a typical catholic genre, and the catholic religion, is a religion of images: it comes to you by icons, paintings, carvings and sculptures. I know that a mule is not a donkey or an ass, it’s an offspring of a male donkey and a female horse (and mainly used as a pack animal), so only half a donkey, but then again, the Jaguar Man probably is only supposed to be a half-God! (Note also that those directors had more fantasy than precision: the pattern on the poncho of the Jaguar Man, is that of a leopard skin).

Retrieved from "https://www.spaghetti-western.net/index.php?title=Requiem_para_el_gringo:_Answers_to_Questions&oldid=86579"
Category:
Cookies help us deliver our services. By using our services, you agree to our use of cookies.