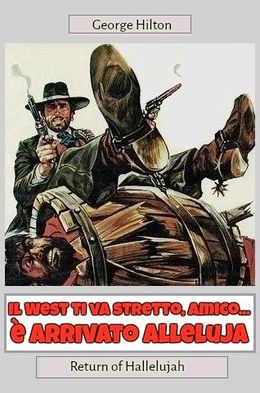 Hallelujah returns to Mexico and the Revolution for more fun. Actually the second adventure is not as funny as the first, but funnier than most other Italian western comedies from the period

A sequel to They Call Me Hallelujah, according to most only half as funny as the first movie. The setting is again the Maximilian uprising and Hallelujah is again sent for by revolutionary general Ramirez, this time to retrieve a statuette, an idol to the Aztecs. The idol was stolen and Ramirez reckons that he can win the Indians for his cause if Hallelujah manages to recover the artifact, but of course there are rivals in the field ...

Most supporting actors from the original Hallelujah adventure re-appear in the sequel, often in similar roles, but notice that Charles Southwood (the Cossack from the first movie) is replaced by Lincoln Tate, who plays another dubious character from the old world, a Scotsman called Archie, kilt and all, who is roaming the West in the company of a quarrelsome accomplice named Fleurette, played by the ever so sexy Agata Flori. Also new are a couple of pious - but also quarrelsome - brothers named Cain and Abel, no less.

If the first Hallelujah movie was still a transitional movie, a blend of gritty and parodying genre characteristics, the sequel is all fun, with hardly any violence. Only the beginning with Hilton sticking a rocket to his handgun has some Zapata flair, so to speak, otherwise we're on Trinity territory with all confrontations resulting in slapstick fisticuffs or Benny Hill type of sped-up scenes with men running around like peewits. Benny Hill is by the way not the only British comedian who comes to mind: with his rolling eyes the Indian Chief - or whatever - reminded me of good old Marty Feldman. There's also a talking cockato making would-be funny remarks (an idea taken from Fabio Questi's infamous Se sei vivo spara) and a dirty old salesman who can't keep his eyes from Mara Krupp, the lady from For a Few Dollars More with the enormous ... right: nose.

Cipriani's score is almost as infectious as his work for the original movie and Agata Flori shows even more delicious curves, so it's definitely not a complete waste of time. Hilton is still using laxatives or other concoctions (this time in combination with a whip!) and there's the traditional tasteless moment with one of Hallelujah's opponents being an obsessive nose picker. But there are a few good jokes as well. if the sequel is only half as funny as the original, it's at least twice as funny as most western comedies spawned by the Italian genre industry in the first half of the Seventies.

Simon Gelten is a long time contributor to the SWDb. "I'm not as old as Tom B. but I'm working on it. I hope to catch up with him by the end of the next decade.", he says. Simon saw all movies by Sergio Leone and several by Sergio Corbucci in cinema, most of the time in Eindhoven, the city where he was born. Currently, Simon is living in Turnhout, Belgium. Simon is active within the database as both Scherpschutter and his alter ego Tiratore Scelto.
Retrieved from "https://www.spaghetti-western.net/index.php?title=Return_of_Hallelujah&oldid=140616"
Categories:
Cookies help us deliver our services. By using our services, you agree to our use of cookies.