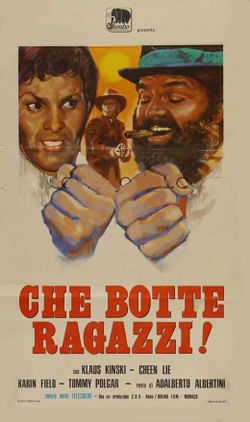 Shanghai Joe and his new sidekick pair up to take down the corrupt town boss, whose trying to steal land from Mexican peasants for its oil.

This time around the filmmakers have sprung for an original soundtrack, though I quickly came to the conclusion that this is not so much of a good thing. The theme song itself could be considered a matter of taste and does add a bit of quirk to the film. However the music during fight scenes is horribly out of place, and does much to work against the scenes, rather than with them.

After we're through the credits and have heard the new theme song, the opening scene leaves no doubts as to the direction of this sequel. A group of Mexicans are searching for water and instead come across an oil trap. The oil shoots out of the ground and one of them tastes it, informing everyone, "this is diarrhea, not water". Clearly great things are ahead...

Joe himself is played by a different actor, and is quite ridiculous looking. The actor is credited as Cheen Lie- perhaps the changing of the name from Lee to Lie is a clever joke, as his real name is Ernest Van-Mohr. This is Van-Mohr's final film, which luckily for us ensured he would not resurrect his performance as Shanghai Joe for any future sequels.

The first 40 minutes are not focused on Joe, but on other characters and attempted story development. Unfortunately the attempts fail, the characters are of no interest and it just feels like wasted time. Most of this section is spent on the new sidekick/buddy character, Bill Cannon, who is an obvious ripoff of Bud Spencer with none of Spencer's charisma. For me, this character embodies everything that ruined the sequel, with this aspect remaining dominant through to the film's ending.

After the 45 minute marker, things do pick up with Joe beginning to have an actual presence in the film, and it starts to become at least a little entertaining.

The kung fu scenes are decent enough, and although probably on par with the fighting of the first film, are not shot as well and lack the same high energy level. Joe's still flying through the air like a crazy man, with a sound effect of rapid spinning playing every time Joe leaves the ground. This sound effect gets quite annoying, as the scenes are in slow-mo and Joe isn't even spinning as the sound plays. There's none of the first Shanghai Joe's crazy editing style, but there is one scene where Joe comes unexpectedly flying into the frame from above. I thought it was hilarious and it ties for best scene with one other...

The other is Klaus Kinski breaking the fourth wall, looking directly into the camera to tell us that "the dead cannot bare witness." Kinski has quite a lot of screen time, but his character is nowhere near as cool as Scalper Jack and he never really gets any chance to let that true Kinskiness run free.

The many differences culminate to produce a feeling of complete detachment from the first film, which really sucks for those of us watching because we liked it so much. Overall there's less violence and it lacks the gore which was one of the highlights of the original Shanghai Joe. There is one whipping scene, but it looks completely painless. The rest of the violence is of your standard, bloodless variety.

The approach in Return of Shanghai Joe is more of a formulaic western, hitting all the standard plot devices. Since much of the film is not focused on Joe, but other characters, it doesn't create the same effect of Joe fighting alone for justice in a hate filled world. Return is also much more talky, and the annoying "Confucius say" remarks seem to be the main aspect inherited from the first film.

Eventually we reach the end, featuring a poorly staged shootout leading to an ultimately anti-climatic showdown and Joe losing the little respect he has left by this point. Perhaps Return of Shanghai Joe would of fared better, had the original never been made and it existed on its own, although I doubt by much. Of interesting note - Mario Caiano, who directed the first Shanghai Joe, states in an interview that he never even knew a sequel was made, until the interviewers asked about it. I hope he kept his sense of humor if he decided to track it down afterwards.