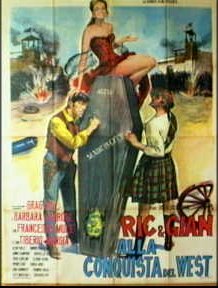 During the War of Secession, a northern army officer hides the gold necessary to purchase horses and weapons in the wagon's wheels. Unfortunately, the journey is more complicated than expected when the two naive drivers sell the wheels to an Indian, and the wagon gets attacked by southern troops!

The English title Rick and John, Conquerors of the West, which you also can find at IMDB and in some books, is most likely only another invention by Tom Weisser. It seems that in fact no English version of this comedy exists.

Retrieved from "https://www.spaghetti-western.net/index.php?title=Ric_e_Gian_alla_conquista_del_West&oldid=139216"
Categories:
Cookies help us deliver our services. By using our services, you agree to our use of cookies.