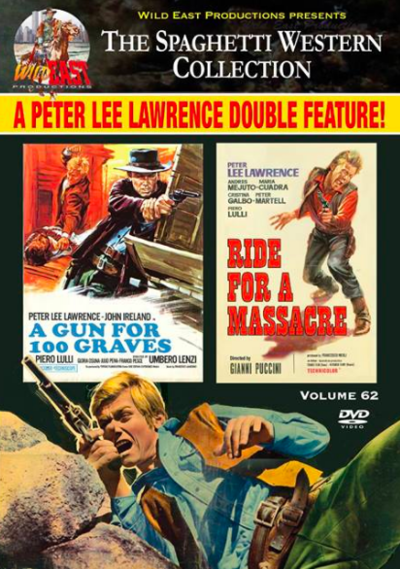 The first-time Peter Lee Lawrence (Karl Hyrenbach) appeared on screen was in the Sergio Leone masterpiece For A Few Dollars More (1965). In that film, Lawrence only appeared briefly, but in a pivotal scene when El Indio (Gian Maria Volonte) has a flashback to Colonel Mortimer’s (Lee Van Cleef) sister and husband (Lawrence) upon a bed as the gift of the matching musical watches was made, until El Indio violently burst in and ends the happy union. In this his second film, Lawrence would be inserted into a film that borrowed heavily from the William Shakespeare play Romeo and Juliet. And what this film does and does brilliantly is it lets the Lawrence character realistically evolve and not turn into an Italian western caricature. One only needs to compare and contrast the hard to fathom character transformations in some of Lawrence's other westerns like A Gun for 100 Graves (Pistola per cento bare, Una, 1968) and Raise Your Hands, Dead Man, You’re Under Arrest (Su le mani, cadavere! Sei in arresto, 1971), to see his transformation from novice/pacifist to stereotypical anti-hero.

In Ride for a Massacre, we get two warring families, a gringo clan called the Mounters and a Mexican family named the Campos. The families are at each other throats because of a piece of disputed land. Therefore, the film effectively begins when the fathers of the two clans decide to do things legal wise and have the local judge draw up and officiate a plan for a legal duel between the parties. The Campos, who have the local sheriff under their thumb, decide to double-cross the Mounters and on the day of the duel, they wait for the clan to enter the valley and with the help of planted dynamite, they proceed to wipe out most the Mounters. Young Johnny (Peter Lee Lawrence), wanted to participate with his the family in the duel, but he can’t shoot straight to save his life and is left behind. After the massacre, Johnny is captured by the Campos and dragged back to their ranch and tied outside, to await his punishment. Another man named Lefty (because of a missing right-hand and a hook) is tied to another post in the courtyard and is unsure of how he got there, but is expecting a severe punishment. Rodrigo Campos (Peter Martell), places a loaded pistol between the men on the ground and cuts the binds that tied them to the post, leaving only their hands for them to free-up. First one to the pistol must kill the other, and the winner can go free. Johnny has other plans and when he reaches the pistol opens fire on the unarmed Campos and frees up the nearest horse and along with Lefty, they ride to safety. Lefty (Andres Mejuto) a notorious outlaw at first wants to distance himself from the area and the Campos, but decides to train Johnny in not only the art of shooting but also in the physiology of a gunman. Lefty tells Johnny, "Real gunmen got to be cold and careful like a banker. First, you've got to keep your pistol loaded all the time. Each one of those bullets is worth a life- and if one is missing it might be yours." 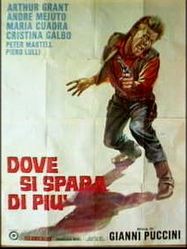 The scene of Lefty instructing Johnny, of course, mirrors the Frank Talby/Scott May mentoring in the classic Day of Anger. Many other films would use the older/younger component, including For A Few Dollars More, Django the Last killer (Ultimo killer, L', 1967) and countless others. And like Talby in Day of Anger, Lefty has a set of rules or commandments as he calls them: shoot first, shoot to kill, watch out for men who play dead, watch out for men carrying two guns, don't turn your back and keep your pistol ready and your eye and hand steady. Johnny in a matter of moments is a sure shot, shooting smaller and smaller pieces of bread crumbs that Lefty fishes from his pockets and holds up for Johnny to shoot out of his hook. But, to the benefit of the filmmakers, Johnny did have a basic knowledge of the handling of a gun before his sparks-notes version in the art of shooting. We are then introduced to two women who will change the course of the lives of all involved. First Johnny is taken to town and there he is introduced to a prostitute who is named Rosalind/Savannah and she falls instantly into love with "Precious Johnny," as she calls him. Before the two consummate their budding romance, Johnny is alerted by Lefty that a stagecoach is due to arrive with rifles for the Campos. Johnny and Lefty stop the coach and while not finding any guns, Johnny is instantly smitten by the beautiful Giulietta (Cristina Galbo), and she with him. Unbeknownst to either, they are offspring of the warring Campos and Mounters clans. 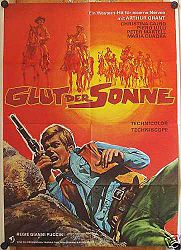 From this point forward we get some back and forth with Johnny and Giulietta falling deeper into love after their initial meeting and the ramifications that arise from that. Giulietta is betrothed to the town's sheriff, this union brings the law over to the side of the Campos. Fate had intervened years before that forever connected Rodrigo and sheriff Cooper (Piero Lulli). On that fateful day, Cooper, had finally caught up with the villainous Rodrigo and when Rodrigo draws on Cooper, each man shoots and the bullets hit each other leaving each man unscathed and forever bonded together. The vengeful Rosalind/Savannah after discovering Johnny and Giulietta together calls for Rodrigo and tells him, "I think I'm in love with precious little Johnny. But he isn't interested, for an obvious reason. He's in love with someone else. Any ideas who she could be? Go on make a Guess! The girls your sister." After administering a beating to Giulietta, Rodrigo confronts Johnny in the streets of the town. Johnny who had made a promise to Giulietta not to kill again, won't draw his pistol until Lefty arrives in town and is gunned down by Rodrigo. After Rodrigo is killed by Johnny, the sheriff who had witnessed the whole thing from his office arrests Johnny. With the prospects of Johnny being hung for murder looming, Rosalind goes to visit Johnny in jail and when the moment arises, bashes the deputy over the head with a whiskey bottle. Rosalind releases Johnny and when the deputy comes to, he shoots Rosalind in the back. After escaping Johnny tracks down and kills the sheriff on his way to his own wedding. Giulietta rides out to meet Johnny but is caught by one of the Mounters and is to be used as bait to extort the Campos. The ending of the film is a tract on the hate within men and the extremes they will go to defend not only their families but also their hate for their neighbors. The very ending scene which I will not revel here is one of the strangest ever committed to film, an odd ending to a great film. While still using some of the same old tired tropes of the genre, the film in all essence is actually a love story, and how many Italian westerns rode into that territory. I think the film is in need a reappraisal and is vastly underrated. A film that was a bit outside the usual parameters of the genre and shines brightly because of that. The cast is outstanding and the direction is wonderfully handled by Gianni Puccini, with a solid score from Gino Peguri. 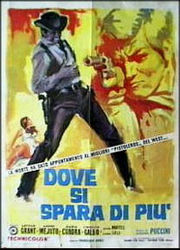 The Wild East DVD's print and sound quality are outstanding on this film. This film along with the other film on this twofer, A Gun For 100 Graves makes for one of the most entertaining Italian western releases of 2018! You'll get to see the two films mentioned above in anamorphic widescreen presentations, theatrical trailers, and picture galleries.

Order here from Wild East or buy from Amazon.com

Article written by Michael Hauss, author of reviews and articles for Monster magazine, We Belong Dead, Multitude of Movies, Divine Exploitation, Exploitation Retrospect, Grindhouse Purgatory and Weng's Chop and various online sites that includes Diabolique, Multitude of Movies, Theater of Guts and the SWDb. He has a love of film with particular interest in the Spaghetti Western and Horror genres. Michael lives in the United States where he resides with his daughter and their two cats Rotten Ralph and Fatty boo-boo.
Retrieved from "https://www.spaghetti-western.net/index.php?title=Ride_For_A_Massacre_-_Wild_East_Productions&oldid=122625"