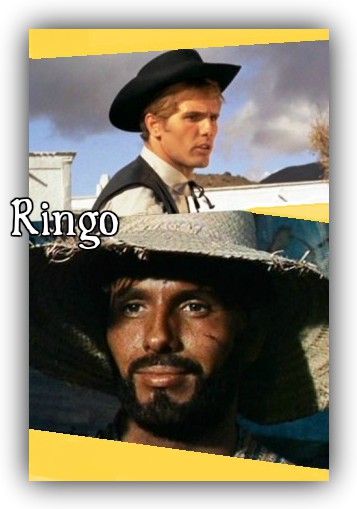 Both films were directed by Duccio Tessari

Unlike most other monikers of spaghetti western superheroes, the name Ringo has a historic basis. Johnny Ringo was part of the Cowboy clan hostile to Wyatt Earp and Doc Holliday in the famous conflict which eventually led to the Gunfight at the O.K. Corral. For this reason, Sergio Leone rejected the name when it was proposed to him while conceiving his first western, A Fistful of Dollars. The name was proposed by Duccio Tessari, one of the movie's screenwriters, who had rather thought of John Wayne's character of the Ringo Kid in Stagecoach than the historic Johnny Ringo (1), but Leone loved Wyatt Earp, and didn't like his main character to be called after one of Earp's opponents.

For this reason the name was still available when Duccio Tessari was offered the chance to direct his own western. A Pistol for Ringo was released in May 1965 and became one of the surprise hits of the year, making more than a billion lire and turning its lead actor, former stunt man Giuliano Gemma into a mega star. Westerns had been a very popular genre in post-war Italy and like numerous boys of his age, Gemma had played cowboy games as a kid. He had studied all major western stars and was very keen on imitating their movements and tics. His favorite actor was Burt Lancaster, especially the smiling, slightly mischievous Burt Lancaster from Vera Cruz. It was decided that Ringo would be dressed like Gary Cooper in High Noon. The Ringo character was presented as a more sophisticated version of No Name: clean-shaven, well-dressed, good-natured but still lethal. Like most of the Italian westerns from the period A Pistol for Ringo was quite violent, but it was also fairly light-hearted, often nearly felt like a comedy. 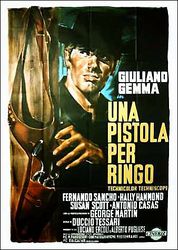 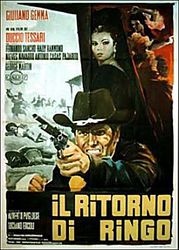 The immense success of the movie was a real eye-opener for the Italian genre industry. Tessari had first asked Robert Woods for the role, because it was thought that it took an American actor to make a western, but Woods had turned it down due to a prior conflict with one of the producers, Alfonso Balcazar. A Pistol for Ringo showed that an Italian actor could do the job very well: Gemma had adopted the Americanized Montgomery Wood for the occasion, but in Italy he very soon became Giuliano Gemma again, Faccia D'Angelo (Angel Face), Il Pistolero Nazionale, Il Re dello Spaghetti western.

Gemma received more flattering knicknames than any other actor in the business and around this time he must have been the busiest man on the planet: within a span of no more than twelve months he made four westerns (plus two non-westerns!) and they were all incredibly successful. Il Ritorno di Ringo is usually called a sequel, but in reality it bears very little resemblance to A Pistol for Ringo. It's a much darker film, more concerned with identity and existential pains. The playful Ringo character has become an embittered man, a war veteran who must fight for his ranch and family in a post-war society in disarray. Like Kevin Grant has pointed out, the different moods of the Ringo movies are immediately established by their respective theme songs (both sung by Maurizo Graf): The first one, accompanied by a wistful Morricone guitar piece, speaks of 'green fields', while the second depicts Ringo as plaintive figure, 'with downcast eyes and ragged clothes' (2). Today The Return of Ringo is considered by many to be the better film of the two and also the best movie of the tandem Gemma-Tessari. 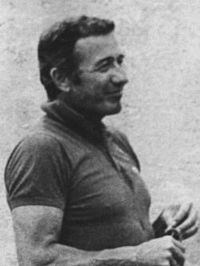 According to some, both Ringo movies were shot back to back, without a break in-between. On the Italian Wiki page of the movie, it is even suggested that Return was made first, but held back (for one reason or another) for considerable time. According to Chris Casey they were financed as a package late 1964 as part of Tessari's involvement in the immensely successful A Fistful of Dollars (3).

It seems unlikely that the movies were literally shot back-to-back, that is simultaneously, since they were shot on different locations in Spain (Pistola mainly in Andalusia, Ritorno in Catalonia). Were they by any chance made one after the other, first Pistol and then Return immediately afterwards, or the other way around? It's not impossible, but again it seems not very likely. Forum member Stanton noticed that the movies were shot in different seasons: "Pistol (...) was shot in the winter in Almeria in South Spain, whereas Ritorno was shot (...) in Catalunya. Interestingly you can see in Pistola a lot of green grass between trees and around ways, but in Ritorno at similar places you can spot only withered grass, which is typical for Catalunya (and Spain in general) in Summer. (...) in Pistol I can see in many scenes these greenish spots which clearly indicates a winter shooting." (4)

According to Marco Giusti, Gemma made One Silver Dollar (with Giorgio Ferroni) between the two Ringo movies. He also says that Tessari immediately started conceiving the second movie after the completion of the first. So the movies might have been a package deal, but were not shot simultaneously: after they had finished the first movie, Tessari immediately started working on the second (preparing, developing it) but Gemma went to Ferroni to make One Silver dollar. It seems in accordance with most of the evidence. The most logical scenario seems that A pistol for Ringo was shot in first months of '65 (works may have started in December '64) and released on may 12; the works on The Return of Ringo then started in summer and the movie was released on December 8; in-between Gemma made One Silver Dollar, which was released in August the same year.

Tessari never meant The Return of Ringo to be a sequel, but it was most certainly presented as one by its distributors. In the Italian film industry it was not unusual to suggest a link between separate films by means of a name. It premiered with the slogan: "Attenzione alle false pistole ... questo è il solo, il vero, l'autentico Ringo Faccia d'Angelo" (Pay attention to false pistols ... this is the only, the real, the authentic Angel Face). So a connection was suggested between the two films while story-wise there was none. Of course, the slogan was also aimed of the series of films that were actually were re-titled to cash in on Tessari's movie. Ringo was a hype and the name quickly became a label: everybody wanted to make a movie with the name in the title.

The same thing would happen (both in Italy and abroad) with monikers like Django, Sartana and Sabata, but the one and only autentico Ringo, was and will forever be Giuliano Gemma.