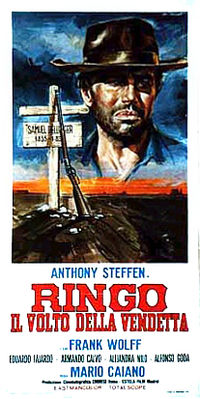 Director Mario Caiano, best known for horror films like Amanti d' Oltretomba, co-wrote this much-parodied spaghetti western. Another in a long line of films titled for Lorne Greene's 1964 hit song "Ringo", this is one of many entries which fail to even feature a character with that name. Instead, Antonio De Teffe and Eduardo Fajardo star as two friends who rescue bumbling bandit Fidel (Armando Calvo) from a shootout. While patching him up, they discover half of a treasure map tattooed on his back. Learning that the other half is tattooed on the back of a sheriff (Alfonso Goda), they set about trying to put the two halves together while being joined by card sharp and all round trickster Frank Wolff, who discovers their secret and wants in on the deal. American director Paul Bartel put a bizarre spin on the story in his comedic western, Lust in the Dust.

An entertaining film, which will provide a couple of hours of amusement, but is fairly derivative. The score is good.