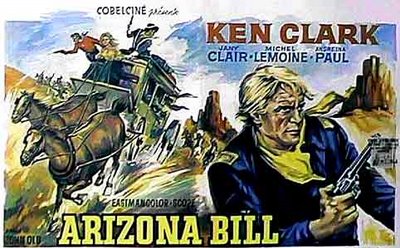 Mario Bava is far better known, and respected, for his Horror and Giallo films but he did make three westerns of which Road to Fort Alamo is the first, and some say, best. So Koch Media's recent release of this film has been gratefully received by italian genre film fans everywhere as we finally get the chance to judge for ourselves just how well the maestro of the macabre handled the horse opera.

The first thing that strikes you as the film unfolds is that, for such an innovative film maker, this is a very classical western in its style. 1964 was, of course, very much part of the 'early' period of italian westerns so it is hardly surprising that the Leone influence that shaped so much of the genre over the coming years was not in evidence here. In fact, the over riding influence in this film is clearly that of another, older, godfather of the western; John Ford. Parallels with Ford's 'Cavalry Trilogy' abound. The arragont commanding officer who leads his men into danger because of his insistance on going by the book is lifted straight out of Fort Apache, but many other elements could be attributed to any number of Ford's films. The wise and experienced sergeant, the strong woman character travelling in the wagon, the wanted bandit redeeming himself in the face of danger for others; all of these are Fordisms and it is obvious that Bava's film was meant to reflect the great man's work. Unfortunately, Bava didn't have the benefit of Ford's landscape to work with nor, clearly, his budget. It's equally clear, however, that he also didn't share his natural affinity with the genre. That is not to say that Road to Fort Alamo is a bad film. I quite enjoyed it. But the piling up of elements from previous westerns does not equal a quality entry into the field.

Interestingly, some of those elements lifted from Ford's classic westerns, although common in american films up to this time, proved to be rare in the spaghetti genre that unfolded over the ensuing decade. Stories involving the U.S army battling against the threat of indian attacks are very thin on the ground. In fact, the bright blue and yellow cavalry uniforms and blazing red warpaint on show here are so unfamiliar to the spaghetti afficionado that they create an almost inverted originality. The same goes for the studio bound night time 'exterior' shots which were all clearly filmed on an Elios studio sound stage. These scenes have a strikingly lurid colour palette and lighting set up which gives them quite a pleasing, if unreal, ambience about them. This is also the case with the cave scenes, of which there are a number, and which suggested to me more of a Peplum feel than a western one.

Indeed, the peplum connection is quite strong in this film throughout. All the lead actors, Ken Clark, Jany Clair, Michel Lemoine and Alberto Cevenini had previously appeared in a number of sword and sandal epics and Bava himself of course had early experience during that particular cycle of italian commercial films. Clark, in particular, had a physique which probably suited him better for Peplums than Oaters but his previous experience in his native U.S.A in films such as The Proud Ones, The True Story of Jesse James and Delmer Daves' The Last Wagon shows that he was reasonably at home in the Western too. And he does a reasonable job here, as do the rest of the cast. Alberto Cevenini is perfectly fine in the Harry Carey Jr, younger sidekick type role, Michel Lemoine is suitably slimy as the psychopathic gang leader, Carson, and the flame haired Jany Clair plays the love interest with as much voluptuousness as you could ask for. It is also nice to see Gerard Herter in all his wickedness appear, although all too briefly and this time as a card sharp rather than his usual teutonic, nobleman officer.

Overall then, the film is probably best rated as a mixed bag. Unusaul in its strong adherence to old school american western cliches and bright colour palette, yet lacking in any real originality. Competently acted and directed but suffering with some awful continuity errors that not even its low budget can excuse. These are actually quite fun in their own way. My favourites being Ken Clark's black haired stunt double (Clark is a blonde) and the changing colour of horses as they ride in and out of shots. The musical score by Piero Umiliani is quite good but probably better suited to a 50s crime thriller with its use of staccato brass and tumbling violin riffs and the happy ending, though fitting with the tone of the piece, is a bit too predictable and trite. But despite all this, I found it entertaining throughout and would certainly recommend it to Bava completists and early italian western fans alike. In fact to anyone not averse to a bit of corn with their spaghetti.

Congratulations are due to our friends at Koch who have done a fine job on the DVD release as usual. The picture is beautifully clean for the most part which shows off the aforementioned bright colour scheme to perfection. It is in full 2.35:1 ratio with good sound quality and Italian and German audio with English subs available through your remote. My only criticism of the release is that the documentary featurette included, despite having all titles in English has only italian audio and german subs available. Looks like it would have been interesting if only I could understand what was being said. --Phil H 12:19, 21 July 2008 (UTC)